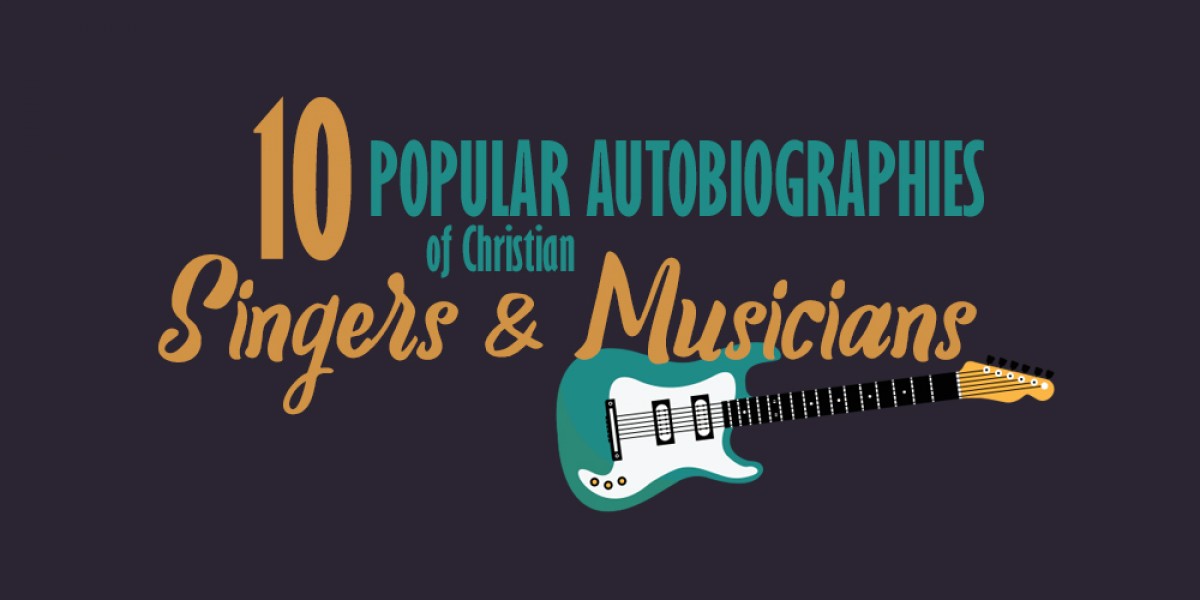 The voices and musicians behind some of the biggest hits in Christian music don’t just draw inspiration for their material out of thin air. Just like us, these entertainers are surrounded by motivational people and complex backgrounds that have driven them to who they are today. Though we listen to their albums and see them perform live, we may never know the struggles and heartwarming moments that have led to our favorite Christian songs. More than a few Christian singers have taken to writing books over the years, some even telling their own stories along the way. Christian singers like Chris Tomlin, Twila Paris, DC Talk, and others have penned stories of inspiration, shared the struggles of the global Church, and pondered on the heart of worship. For this list, however, we’ll focus on Christian singers who have written their own history with stories from the road and their family history. Here are some of our favorite autobiographies from Christian singers and musicians.

This singer/songwriter is a fan favorite who has been a popular part of the Christian music industry for 30 years. Hit songs like “The Great Adventure,” “Dive,” and “Live Out Loud” permeate throughout his entire career. On top of the stories that come from decades of touring and recording, Chapman has plenty of personal moments to share including the loss of one of his children. The story received national attention and served as the inspiration for Mary Beth Chapman’s own book on grieving and understanding God’s will. “Heaven and the Real World” covers all of the milestones that fans will want to know about with pictures and words of inspiration.

Rapper Lecrae has achieved more crossover appeal with mainstream listeners than many of the Christian singers on this list. Part of that is because no matter what religious affiliation you hold to, it can’t be denied that his words come from a place of authenticity. Now you can hear more about the two-time Grammy winner’s story and what influences his writing in “Unashamed.” The rapper’s testimony includes a lot of tough moments and hard circumstances that led to where he is today. Though he still has a long way to go at 38-years-old, he has experienced hardship and come out better for it, something with which his fans can relate.

Lacey Sturm’s music career came of age during the early 2000’s rise of alternative rock. As the singer of Flyleaf, she was able to build a fanbase for her new solo career. The rock vocalist has a rough history that feeds into her passion for music. Suffering from depression and suicidal thoughts as a young atheist, she found hope through the gospel. You can read all about her journey and pick up her thoughts on how to live a purposeful life by reading her biography, “The Reason,” or her book on relationships, “The Mystery.”

You may be more familiar with Third Day’s singer than its guitar player, but Mark Lee shares the band’s story as well as his own in “Hurt Road.” It all starts with a car crash, but that is far from the end of this musician’s journey in Christian music. You’ll hear details of Lee’s life, Third Day’s journey from kids with instruments to one of the biggest Christian bands of all time, and discover just how interesting life on the road can be. You’ll also find a foreword written by Mac Powell to give an extra dose of authenticity to it all.

Rory Feek was a successful country songwriter before teaming up with his wife for the country duo Joey + Rory. The two achieved fame through the “Can You Duet?” reality show, but their story made headlines when Joey was diagnosed with cancer. The couple began to make more religious music after the news, including an album of their favorite hymns. Rory wrote the memoir “This Life I Live” after Joey’s passing in 2016. His story is one that is full of grief, but also gratitude for the time that he was able to share with his wife.

There are very few Christian singers who have contributed as much to the genre and churches worldwide as Bill Gaither. Having spent 50 years in the industry, Gaither has written countless songs, performed around the world, and touched the lives of millions of Christians. Though he is in his 80s today, the songwriter penned a memoir nearly 10 years ago titled “It’s More Than the Music.” If you’ve ever wanted to know more about the early gospel music industry or the man behind such classic songs as “He Touched Me” and “Because He Lives,” this is the book for you. In addition to Gaither’s own story, you may be interested in the autobiography of Michael English (“The Prodigal Comes Home”), who sang in the Gaither Vocal Band. After falling from the Christian music scene due to a scandal in the 90s, God transformed the life of English and brought him back out of his sinful period.

You may know that Natalie Grant is the powerful voice behind mega-hit songs like “King of the World,” “Held,” and “In Better Hands,” but did you know that she is also an author? On top of a few children’s books, Grant has also penned two books that are part autobiographical, part advice. Years back the singer released “The Real Me,” a book that details her own issues with body image as well as ways in which young Christian women can be satisfied in the Lord. Her more recent book, “Finding Your Voice,” is about learning to be confident in who you are and using your skills to make the world a better place and spread the gospel.

Just because Christian singers and entertainers have a little fame doesn’t mean they have it any easier than us. Laura Story was a popular songwriter long before her solo career took off in recent years. Her biggest hit to date, “Blessings,” also happens to be the closest lyrically to her story. As you can read in her book, “When God Doesn’t Fix It,” Story’s husband suffered from a brain tumor that drastically changed the course of their lives. Drawing from her own experience, and while sharing her story, the singer/songwriter looks to the Bible for guidance in these times when you don’t know what to do.

If you’ve followed Danny Gokey’s career over the years, you’re likely aware of the fact that his wife died at a young age. Weeks before he ever got his shot at American Idol or in the music business in general, his high school sweetheart and first wife passed away. This tragedy became Gokey’s inspiration for chasing his dreams as well as the hit song “Tell Your Heart to Beat Again.” Taking the title of his second album, “Hope in Front of Me” is the story of the singer’s journey and words of advice for those who are going through a similar circumstance.

With 20 years of experience in the Christian music industry, Plumb has built a following of fans who appreciate her powerful lyrics and willingness to discuss issues that aren’t exactly radio-friendly. Among her most popular songs are “Need You Now (How Many Times)” and “In My Arms.” A few years ago the rock singer published her first book titled after the former song. A relatively short read, the book details her journey in the music business as well as the struggles and victories of her personal life.

We as an audience have been blessed with Christian singers who are eager to share their stories through powerful music and in writing. These autobiographies take us deeper into the process of what it means to be a professional musician while balancing the rest of this crazy life. Check out these books or similar ones written by Mark Lowry, Brian “Head Welch, and other Christian singers and musicians.

At the K-LOVE Fan Awards we are all about connecting you with the artists you love. Each year we bring together the biggest names in Christian music for spectacular performances and unparalleled access for the ultimate fan experience. Find out how you and your family can attend by clicking on the link below.