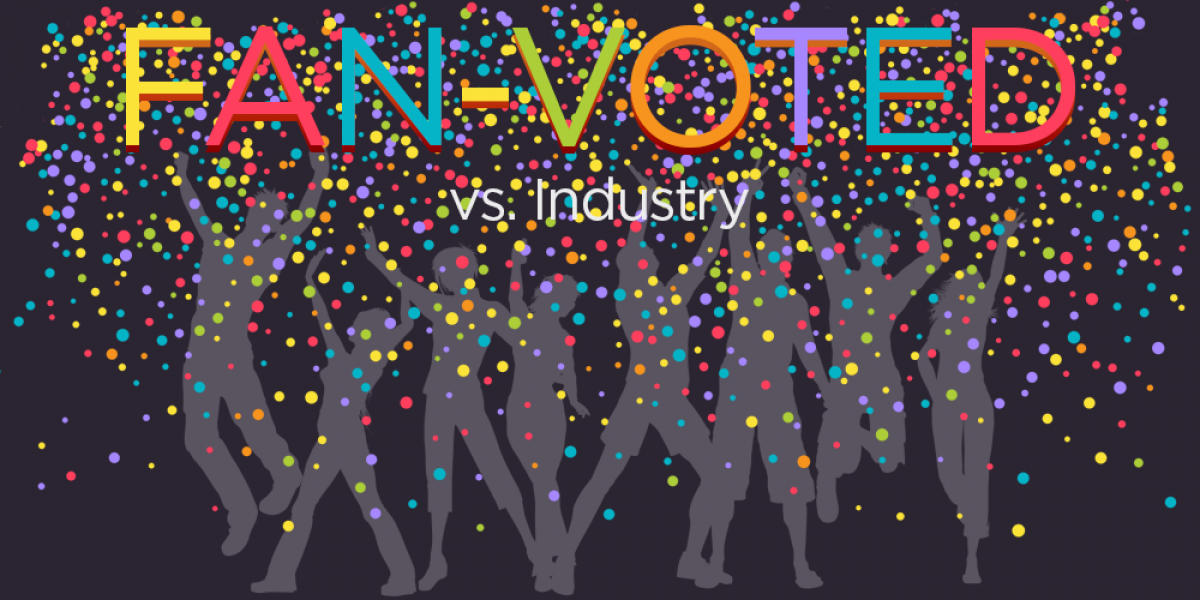 For every hobby and passion out there, award shows exist to highlight the people and projects that are making the biggest impact. In the entertainment world, some of the biggest award shows are the Grammys, the Oscars, and the Emmys. These institutions have a long history and winning one means that your career will forever be viewed in a different light. Aside from the big award shows, the entertainment industry also has a number of other special achievements in awards like the Screen Actors Guild and the CMA Awards. These special awards listed above are all considered industry awards. That means they are voted on by people are employed by the industry being highlighted. In music, this is often record executives, session players, and songwriters. In film, many of the awards are decided by actors, producers, and writers.

As you’re probably aware, there are also many award shows out there that are voted on by fans. These include the People’s Choice Awards, the CMT Music Awards, and the MTV Video Music Awards. Have you ever thought about the differences between these kinds of award shows and why we have both? Let’s compare some of the basics of each.

The Credibility of Award Shows

Many of the industry award shows that are popular today became name-brand achievements by being built upon decades of credibility. For instance, the Academy Awards just celebrated its 89th year in 2017. Nearly nine decades of tuxedos, red carpets, and big speeches. It’s hard to argue with that kind of legacy.

On the other hand, that very same show has come under scrutiny in recent years because it has failed to adapt to the modern world. One issue has been that many viewers find a 3-hour show of mostly speeches to be boring. This has led to certain awards being held separately, the inclusion of musical performances, and drumming up viral gags like when host Ellen DeGeneres ordered pizza for all the celebrities mid-broadcast.

Another issue that has called the credibility of industry award shows into question is the failed representation of certain demographics. In 2016, the hashtag #OscarsSoWhite was used to spread awareness over the fact that none of the acting categories featured a non-white performer. The Grammys had a somewhat similar moment in 2017 when Adele beat Beyonce for Record and Album of the Year.

What about fan-voted award shows? As far as credibility, these shows are certainly lacking the historic precedence of their industry counterparts. Despite this, it’s empowering to know that the fans of a certain genre have the ability to influence who wins the big awards. These awards also include very specific categories so that they can highlight many popular shows/movies. At the People’s Choice Awards in 2017, this meant that TV shows like “Supernatural” and “Fuller House” were able to win awards they likely wouldn’t get at the Emmys or Golden Globes.

The only negative to fan voting is that it often favors the people who don’t have a lot on their plate. By this we mean that a lot of these award shows allow fans to vote dozens of times a day. If you voted for your favorite TV show once and someone else voted for a different show 15 times, it’s hard to believe your vote counted for much. This does hurt the credibility of fan-voted award shows a little, but everyone also has the same opportunity to vote the maximum number of times.

Awards are often looked at with the same sincerity as professional critics. Many people disagree with the choices and think they could do a better job. At the end of the day, though, these two options are the best way to honor the entertainment that we love.

Different Focus of Fan-Voted vs. Industry

As you can probably imagine, industry award shows carry a very different attitude than the fan-voted events. With industry awards, you can expect the red carpet to be a star-studded event that features six-figure dresses and more coverage than the Super Bowl. The attire is very formal and hours of television are dedicated to discussing who wore the best outfit.

As for the award shows themselves, industry awards are a little more reserved. Most of the fun to be had takes place on the red carpet and in the opening monologue. Beyond that, the majority of the evening rotates around the importance of the industry and giving passionate speeches on the issues that matter. Industry awards sell the image of glamour and elegance.

Fan-voted awards are typically much more laid back. Depending on the award show, you might see your favorite celebrities wearing jeans and t-shirts or a dress you have in your own closet. The focus of these award shows is centered on having fun and letting fans get to see the famous people who they admire in a different light. Even though there is still likely a red carpet at the show, you’ll probably only see a couple of highlights at best unless you watch an actual fashion show that dissects these things.

Inside the fan-voted event, you’re going to see a stage that goes out into the audience more. There’s often some kind of “fan zone” at the front of the theater where lucky fans get to be super close in exchange for making the show look better on TV. This arrangement is often maximized by having popular music artists performing throughout the show.

While industry awards shoot for glitz and glamour, fan-voted awards look to entertain. This usually leads to a more interesting show, despite the fact that the awards don’t mean as much within the industry.

Who Goes to These Award Shows?

No matter what kind of award show you go to, there should be a large number of celebrities and people from within the industry in attendance. After all, the entertainment field employs an outrageous number of people and many of them are involved in these events.

The difference can sometimes be found in which celebrities are willing to take time out of their busy schedules to attend. It’s much harder to turn down an invitation to the Oscars than, say, the Kids’ Choice Awards at Nickelodeon. You probably won’t see Meryl Streep or Martin Scorsese at some of the fan-voted award shows, but these events do allow for other celebrities to fill the gap. For example, wrestler John Cena hosted the Kids’ Choice Awards.

Also, the majority of the audience at fan-voted shows is made up of everyday fans who bought or won tickets. The show feels a little more authentic when real fans are going crazy for their favorite performer rather than a roomful of millionaires clapping like they’re at a golf tournament.

Which Award Show is Right For You?

If you ever get the chance to go to an award show, fan-voted or not, it’s a rare opportunity to see a lot of famous faces in one place. Now that you know what to look for, you can make a better choice about what kind of shows you want to watch or attend. Only you know exactly what you’re looking for, but you can’t really go wrong either way.

The K-LOVE Fan Awards is the biggest fan-voted award show in Christian entertainment. Featuring many of the cool aspects we mentioned above, this is a weekend full of stellar performances, big names, and a whole lot of fun. Find out how your family can attend by clicking on the link below.