Bible Movies: Do They Always Have to Be Accurate? 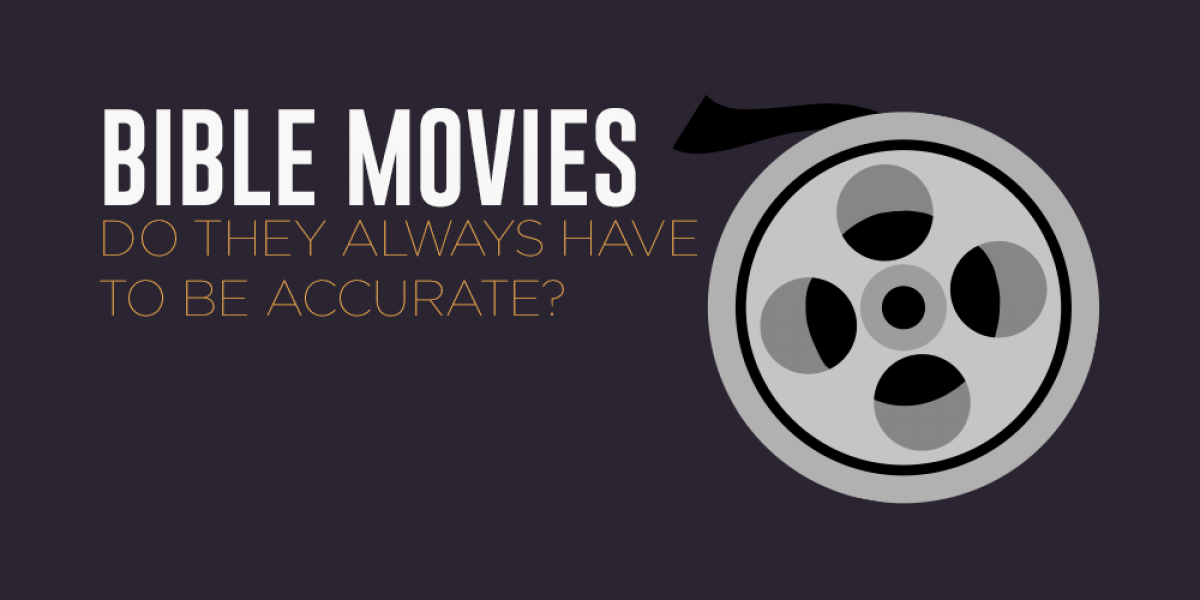 It’s Friday night and your family gathers in the living room to watch a TV movie based on the story of Moses found in Exodus. Around ten minutes in everyone starts shooting a glance at one another saying things like “I don’t remember it happening quite like that in the Bible…” Next thing you know, you’re changing the channel and saying you’ll never watch one of those Bible movies on TV again. Such was the case for many families when NBC aired a miniseries titled “Noah’s Ark” in 1999. The film was critically panned and disliked by many viewers for the outrageous liberties taken in the story. Sadly this kind of twisting of scripture in Bible movies is not uncommon at all. Nearly every film that depicts a Biblical story makes a change to the account written. Why is there an accuracy problem in these films? Why does it matter?

Reasons Why Bible Movies Are Changed From Scripture

If we’re going to make a judgement on how Bible movies are often manipulated from the historical account, we should probably first understand why these changes are made in the first place. While it would be easy for Christians to sit back and claim that these stories are altered out of some form of persecution, the reason why changes are made is often less malicious.

One reason why popular Bible movies (aka those mode by TV networks and Hollywood studios) are inaccurate compared to their source text is because the people making these creative decisions often look at the Bible just like any other book or short story that they wish to adapt. For them it’s not about presenting an accurate account but telling a story. This means that they have no issue with cutting out a plot point or character if they believe it detracts from the script being written.

A more cynical reason why these changes may be made is because producers want to water down a Gospel message so that it doesn’t offend non-Christians. We see this with many spiritual films that want to engage an audience of faith, but also wouldn’t mind appealing to non-Christian family audiences, people who love sports movies, and so on. At the end of the day, they really just want to make a film that is profitable. That’s both understandable and disheartening.

Another reason why Bible movies are changed from scripture is that the Biblical account isn’t always fleshed out enough for a 100% faithful adaptation. Take 2016’s “The Young Messiah” for example. This is a film about the early life of Jesus, a topic that is only covered in a handful of verses. While you can try to aim for scriptural accuracy, some of the narrative has to be created in the writer’s mind. It’s important to consider each change from the Biblical account and think about why the change was made. Sometimes these changes or interpretations are made out of necessity, sometimes out of ignorance, and other times in an attempt to water down the work of God.

The Ways in Which Filmmakers Adapt Stories

The first way in which filmmakers change Bible movies is by cutting or altering characters. Book adaptations and “based on true events” films will often get rid of a character or compress multiple characters into one so that a story is simplified. This is something that is also done in Bible movies. If a movie were about Jesus, the writers may attribute an action of James to Peter just for the simplicity of not having to develop two characters.

While something like this may be seen as a huge change, it’s nothing compared to the times when secular productions completely fabricate events. Remember that “Noah’s Ark” movie we mentioned? In one scene, Lot tries to lead a band of would-be pirates against the ark in order to survive the flood. You may not remember that scene because it is not something listed in the Bible. That didn’t stop a more recent production of “Noah” (this time starring Russell Crowe) from writing in a similar scene of wicked men trying to overtake the vessel.

Not every change in Bible movies is one that hurts the story or presents a major conflict with scripture. Some have more hazardous effects than others. In 2018’s “Samson,” the character of Delilah is presented in a much more forgivable position than some would read from the Bible’s account. While this may be an annoyance, it doesn’t drastically change the story. A more serious injustice is in Ridley Scott’s “Exodus: Gods and Kings.” The whole movie is filled with different theological and cultural questions that ended up hurting its money-making ability (as well as its connection with Christian audiences). On the one hand people weren’t sure why the most caucasian actors ever assembled were playing a group of Egyptians and Israelites.

Aside from casting, however, the movie also had issues when it came to its depiction of Biblical events. For starters, Moses (played by Christian Bale) attempts to lead a resistance similar to William Wallace’s in “Braveheart” upon his return to Egypt. We can only assume this was an attempt by director Ridley Scott to add some sword-and-sandals action to a story that isn’t quite “Spartacus.” This deviation takes up a good 15 minutes of screen time, but it’s far from the only non-Biblical issue. Another conflict arises when the film shows that Israel is not spared from the plagues in Egypt. The Bible specifically states multiple times that Israel does not have to suffer during these episodes. For example, Exodus 9:6 states, “So the Lord did this thing on the next day, and all the livestock of Egypt died; but of the livestock of the sons of Israel, not one died.”

Why Do Changes in Bible Movies Matter?

We could keep listing all of the different ways in which these films change stories from the Bible, but we think you get the point. So why does it matter? Who cares if Bible movies change a few facts or erase characters?

To be fair, not every deviation from scripture has as much of an effect on these stories. Some changes are more understandable than others. These are movies, after all, not documentaries. That’s why it isn’t a huge deal when Delilah only tricks Samson a couple of times in the 2018 film from Pure Flix instead of the movie going through each individual occurrence.

These changes start to matter, though, when they affect how the audience views God, His plan for mankind, and the path to salvation. Viewers have a tendency to accept the values and information that is depicted on screen. That’s not something limited to Christian films, mind you. It is a commonly held belief that the TV show “Modern Family” influenced the national debate on gay marriage. As for Bible movies, it is a sad fact that some viewers will believe what they see on a screen over what is written in the Bible. Part of this is due to the number of people who don’t faithfully read God’s Word. Even for people who have read the full Bible numerous times, seeing a certain depiction in a film might alter how they recollect a story.

Biblical accuracy in films is important, but the level of importance depends on how it affects the story as a whole. For example, when Moses tries to lead an armed rebellion against Egypt in “Exodus: Gods and Kings,” the film is negating large excerpts of Exodus 3 and 4 where God and Moses discuss the plan to free the Jews. This is a big change from the original story that affects how we look at God and the ways in which He speaks.

It’s fair to allow the occasional deviation from scripture in these Bible movies for the sake of a more cohesive story, but if we must sacrifice major truths from the Bible then the process becomes a slippery slope. If nothing else, these instances remind us of why we need to be engaged in scripture and sharing its value with others. We cannot always rely on a two-hour film to properly relay the events in an entire book of the Bible.

Bible movies that display the story of God are wonderful things. They allow us to see the stories of heroes like Moses, Noah, and even our Lord and Savior Jesus Christ in a fresh light. We should always demand Biblical accuracy wherever it can be applied, but even more important is reading the Word for ourselves.

At the K-LOVE Fan Awards, we know just how important Christian entertainment can be. That’s why we want to give fans the possibility to connect with the artists and films that they love. Find out how you and your family can be part of the ultimate fan experience by clicking on the link below.