Christian Bands to See Live in Concert in 2018 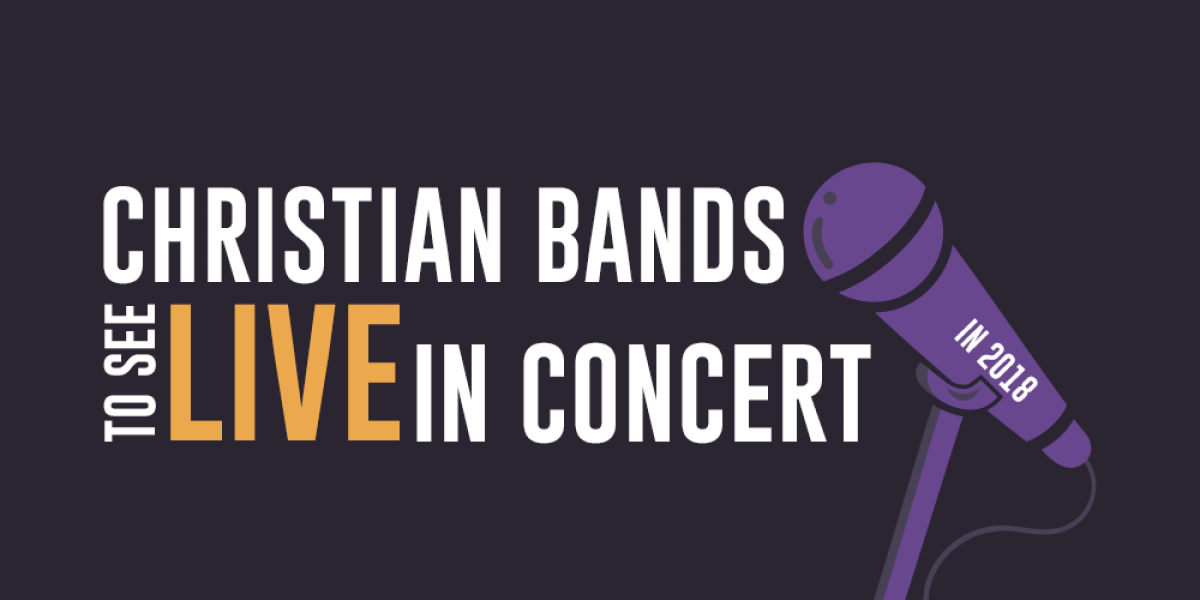 There’s just something about seeing live music that makes listening to a CD at home seem obsolete. When we take the time to go see our favorite Christian bands in concert, we are not only supporting them financially, we are buying into an experience. In 2018 you can find some of the most popular bands in Christian music performing around the globe in festivals and tour stops. Since we’re nearly halfway through the year, we wanted to make sure you knew how to see some of the best Christian bands live in concert for yourself. Here are some of our recommendations for the year.

We’re sad to see them go, but Third Day recently announced that the band was embarking on a farewell tour through the end of June. The group has built an impressive career over the last 20+ years, putting together great albums like “Revelation” and 2000’s “Offerings: A Worship Album.” Although many of the farewell tour dates are already sold out, we think any fans who wish to see Third Day perform some of their biggest hits like “Cry Out to Jesus” and “I Need a Miracle” live for the last time should do what they can to be a part of the event.

If you’re looking for a high octane music event, look no further than the folks over at Skillet. The group is consistently named as one of the best Christian rock groups as well as one of the best live shows. The group just finished up a tour with for KING & COUNTRY and they’re now headed over to Europe for a short tour where they’ll perform with popular groups like Guns N’ Roses before coming back to the United States. If you want to be a part of a great live show that doesn’t hold back, we suggest you find a way to see Skillet in concert.

Some people prefer a crazy show with loud drums and frenetic light displays, but others just want to enjoy a talented singer belting out worship songs. For the latter group, Lauren Daigle is an artist we would point you toward. The young singer’s “A Night with Lauren Daigle” series has led to an impressive number of sold out shows during its run. Daigle has about a half dozen concerts, festival appearances, and special events coming this summer. Even if you can’t make it to one of those, we suggest you find time to listen to her voice. Here’s one of her many acoustic performances available online.

TobyMac has been one of the most electrifying live performers in Christian music for years now. The seasoned artist has honed his live music into a fine art which thousands of fans enjoy each year. Looking at his upcoming tour schedule, one would think that TobyMac is playing at every single music festival known to mankind. The artist will be playing at shows up and down the east coast from Florida to Alberta, Canada this summer. Whether you’ve been a fan of TobyMac’s from the DC Talk or “Diverse City” days or you’re just a casual fan of Christian music, he is definitely one of the Christian bands you need to see live this year.

One of the Christian bands experiencing the most buzz this year is MercyMe. Although the group has been around for roughly 20 years, 2018 is the year in which a biopic covering the writing of its most popular song was released. “I Can Only Imagine” has made over $80 million at the box office so far. As for touring, MercyMe will be making several appearances this summer at music festivals like River Rock Music Festival in Maine where they can be seen with acts like Danny Gokey and We Are Messengers. This fall you can also catch them on the Imagine Nation tour with Tenth Avenue North.

For those of you joining us at the 2018 K-LOVE Fan Awards, you’ll see Mandisa co-hosting the big show for the first time ever alongside with returning co-host Matthew West. She made a grand return to the Christian music scene with last summer’s “Out of the Dark.” The singer has a range of performances from Kansas to New York to Georgia for fans to check out. For an encouraging concert full of hits like “Unfinished” and “Overcomer,” we think a night with Mandisa is just the ticket.

Big Daddy Weave may not have released an album in a few years, but that doesn’t mean the group has forgotten how to put on an amazing show. In fact, the band has been touring hard through the first half of 2018, wrapping up the Jesus I Believe tour in May. After ending their tour Big Daddy Weave still has a long list of dates through the end of the summer. These guys know how to create inspiring music and they are a great live show.

Singer Jeremy Camp has a pair of tours to check out this summer, along with a few music festival stops here and there. Camp released a new album titled “The Answer” near the end of 2017, a record that includes his latest hit song, “Word of Life,” as well as a great title track. Wrapping up near the end of May is the Decision America tour where the singer will appear with Franklin Graham. Later in the season is the Summer Lights tour, where Camp will perform alongside Rend Collective, Matthew West, and Koryn Hawthorne.

Another one of the most popular Christian bands to see live is for KING & COUNTRY. The Smallbone brothers-led band is known for spectacular concerts that incorporate an array of instruments and dazzling lights. The band is spending part of the summer in Europe, but there are plenty of tour dates and festival stops on the horizon as well. Whether you know every word to every song or you’re just someone who enjoys a unique musical experience, we think you’d like to check them out.

This rock and roll worship leader made quite the splash with the release of “Chain Breaker” in 2016. Since then Zach Williams has followed it up with “Fear is a Liar” and “Old Church Choir,” both of which have become chart-topping successes. Williams is finishing up his Chain Breaker Spring Revival tour in May, but he’ll be playing a lot of shows over the summer, including a few state fairs and theme parks. Make an opportunity to see this artist now before we reach the end of the year.

Some Christian bands tend to make their shows a worship event while others go for pure entertainment. In that latter group is Needtobreathe, a band that knows how to sell out shows and have a good time doing it. The group has a great catalog of songs that range from folk to rock to pop. No matter what kind of music you typically listen to, there’s bound to be a few Needtobreathe songs that will get your feet moving. The band will kick off the Forever On Your Side tour in August.

After reaping a whirlwind of success from “The River,” Jordan Feliz is spending 2018 headlining his first tour. The artist put out a popular follow-up album in March of this year titled “Future” which features some new hit singles like “Witness” and “Faith.” The album shows a more dance/pop beat that should make for some exciting new shows. On this tour you’ll also get to hear from Blanca (and her recent hit “Real Love”) and a fairly new act For All Seasons.

Christian bands go through plenty of changes as the years march on. For some fans it can be sad to say goodbye to different members as they leave or change roles. That’s why it’s such a cool opportunity to see the Newsboys united for a special tour this summer. Each performance on this tour will see original member Peter Furler and longtime members Phil Joel, Jody Davis, Duncan Phillips, and Jeff Frankenstein partnering with current singer Michael Tait for the ultimate night in Newsboys entertainment.

Like Zach Williams and Jordan Feliz, Ryan Stevenson is a musician who has come onto the scene in recent years thanks to a massive single. In Stevenson’s case, “Eye of the Storm” was the track to push him into the limelight. Since then he has followed up with “The Gospel” and a brand new album titled “No Matter What.” You can catch Ryan Stevenson this summer at a number of music festivals and other venues.

There are so many Christian bands you can see live at festivals and fairgrounds any given summer. In fact this is a great way to knock out seeing several Christian bands at once. We personally think seeing Christian bands in a show they are headlining is optimal to a festival experience but some artists can work with any space they are given.

If you’re looking to see Christian bands this, or any, year, you might also be interested in the K-LOVE Fan Awards. Each year we bring together the biggest names in the industry for the ultimate fan experience. Find out how you and your family can be a part of it all by clicking on the link below.