Christian Books from 2016 That You Need to Read 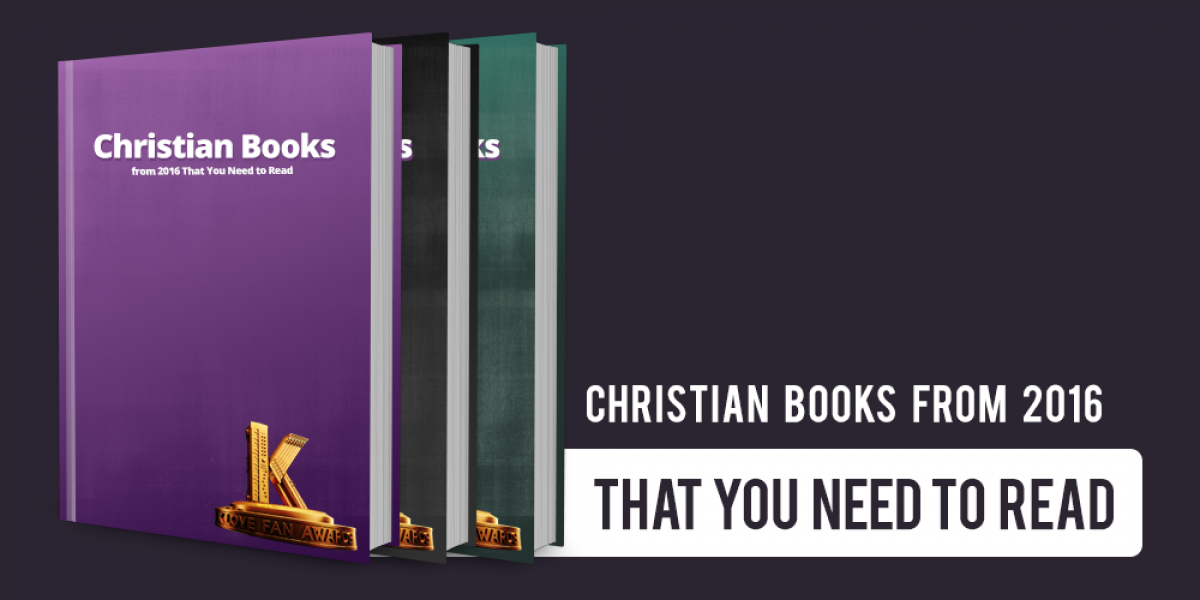 Reading has long been a favorite pastime for people around the world. Books give us the opportunity to learn new things from the fields of history, science, economics, and more. For believers, Christian books allow us to meditate on truths that are difficult to swallow, learn more about famous Christians, and discover how we can better live our lives to glorify God.

2016 was another great year for Christian authors as we added some new books to well-known authors and learned more about Christian figures who penned autobiographies. The following list of popular Christian books contains just a sampling of the powerful work being published from some of the greatest minds in the Christian faith.

Chip and Joanna Gaines, married stars of HGTV’s “Fixer Upper,” join forces with biographer Mark Dagostino to share the story of their personal and professional lives. For anyone unfamiliar with “Fixer Upper,” the show debuted in 2013 and follows the Gaines’ renovation team as they assist families in the Waco, TX area.

While the couple is still pretty young, they have been through quite a bit in their marriage and the pursuit of their dreams. The book has received an overwhelming amount of positive reviews as America can’t get enough of this authentic couple.

Tim Tebow is a household name for anyone familiar with the world of sports. The former Florida Gators quarterback is considered one of the best college football players of all time and he has earned headlines off the field for his eagerness to share his Christian faith.

Tebow’s writing debut came in 2013’s “Through My Eyes.” Both books have received rave reviews as the athlete’s story and his integrity have drawn quite the fanbase. While the first book dealt more with his college career and his time in the NFL, his latest writing examines what we are called to do as Christians when life doesn’t go the way we thought it might. The book contains plenty of sports analogies and tales from Tebow’s life, but the intended audience is not just sports lovers.

Ann Voskamp is a well-known blogger and Christian writer who has sold over a million copies of her books. After the very successful “One Thousand Gifts,” the author’s next topic is on embracing and overcoming brokenness in the pursuit of living an abundant life.

The writer has clearly found her audience based on her other best-selling work and here she gives readers even more to ponder on. “The Broken Way” is a great Christian book for anyone battling disappointment, frustration, or a number of other difficult circumstances.

Acclaimed writer and president of Proverbs 31 Ministries Lysa TerKeurst puts together a thoughtful and sincere look at the impact of rejection and abandonment. “Uninvited” is a personal story for the author as she shares stories from her childhood growing up without her father and the everyday ways that comparison can leave us feeling dejected.

TerKeurst’s previous works include “Made to Crave” and “Unglued” among other Christian books and studies. At the time of this writing, “Uninvited” is the #1 Best Seller for Christian Women’s Issues on Amazon, so it’s safe to say that the book is speaking to a lot of people.

Love Your Life, Not Theirs

Rachel Cruze is the daughter of world-renowned financial whiz Dave Ramsey and a great communicator in her own right. “Love Your Life, Not Theirs” is Cruze’s first solo act as her first book was co-written with her father.

If you have read other books from Dave Ramsey or have heard Rachel Cruze’s speaking engagements, there will probably be a fair amount of material from the book you already know, but it never hurts to hear things again. This would be an especially good book for someone with little-to-no knowledge of the Ramsey brand.

Christian rapper Lecrae penned an autobiography this year that shared the many struggles the artist has gone through during his early life and years leading up to now. The book deals with some pretty dark issues, but there is hope in seeing how the Grammy winner has learned from bad mistakes and overcome rough circumstances.

Lecrae is one of a few Christian artists who has seen crossover success in the secular world. With multiple appearances on The Tonight Show with Jimmy Fallon the last 3 years and a growing fanbase, he has become an ambassador of the Christian faith. It's always enlightening to read Christian books from artists like Lecrae, so this is a great addition to your reading list.

The Voice of the Martyrs is a great organization that brings awareness and support to Christians living in and ministering to areas that are hostile to the gospel. With “I Am N,” the group draws attention to missionaries and recent converts, who are being threatened in countries controlled by Islamic forces.

We often hear that people are persecuted for their faith overseas, but it becomes so much more real when you learn the names and hear the stories of those who are suffering. Although there are some tough details in the book to stomach, it’s important to know what’s happening to our Christian brothers and sisters across the globe. Other Christian books from these guys include the "Jesus Freaks" books that partnered with DC Talk.

She Reads Truth is a popular online community and blog that ministers to women looking for encouragement, Biblical insight, and fellowship. Started as a small gathering, the website has become a massive success.

The book shares the autobiographical personal journeys of Raechel Myers and Amanda Bible Williams, two of the women who founded the organization. While you might get a little insight on the inner workings of She Reads Truth through the book, it’s bigger purpose is to profile these two women and share their belief in the power of the Bible.

Matt Redman’s book is about the song of the same name and the way it has impacted lives around the world. “10,000 Reasons” is a soulful, but powerful song that has the power to really move people.

The book takes stories from a large number of people facing great obstacles or who have overcome tough odds and shares them on an even bigger stage. Readers will also hear about Redman’s own journey with the song and how he’s been blow away with the response he’s received from listeners everywhere.

Having served as the senior pastor of a church in Atlanta, Georgia for 45 years, you can imagine that Dr. Charles Stanley has a few pearls of wisdom to share. In his book, “Courageous Faith,” the pastor shares struggles from his own life and the ways in which he has sought God in times of trouble.

Dr. Charles Stanley is a nationally recognized preacher and theologian due to his involvement with In Touch Ministries and the broadcast of his sermons. Aside from icons like Billy Graham, you don’t often get to read Christian books about long-serving pastors like Dr. Stanley.

Christine Caine is the other popular Christian author who put out a book titled “Unashamed” in 2016. A popular speaker and activist for the fight against human trafficking, Caine’s latest book is about fighting the feelings of worthlessness and shame.

Caine grew up in an abusive environment and she has spent her life fighting for the freedom of other people who have survived horrific times. In “Unashamed,” she talks about how you can move past the distractions, attacks, and humiliations and discover your true worth.

As a four-time Grammy nominee, Natalie Grant knows a thing or two about finding your voice. With her book of that same title, the singer is on a mission to help women discover their passions and pursue them.

“Finding Your Voice” is about putting your fears to rest and setting goals for yourself. Christian books like this will get you off the couch and into action in no time.

John Piper is one of the most recognized pastors and speakers in the Christian community today. With popular books like “A Call to Die” and a growing ministry in Desiring God, the longtime Christian leader has always used his position to advance the kingdom of God.

His latest book is “A Peculiar Glory,” which aims to give readers the assurance that not only is the Bible reliable, but it is self-authenticating. The Bible not only teaches us about God; it is the road to achieving our goal and basking in the glory of God.

Stepping out of her comfort zone, author and speaker Priscilla Shirer released her debut in fiction writing this year. “The Prince Warriors” is a little bit of Narnia with a dash of “The Lord of the Rings.” It follows the exploits of two brothers who are pulled into a strange land with an ultimate conflict.

The book and its sequel are intended for readers around the middle school years. There is also a 365-day devotional based on the series.

If you follow Christian music there’s a good chance that you’re familiar with the Chris Tomlin song of the same name. This children’s book is actually written by Tomlin and it tries to interpret the message of the song into a story that kids will be interested in.

The short book follows a bear named Tucker as he seeks the king’s help in saving his friends back home. At 36 pages, this book isn’t too much of a task for parents looking to read with their kids or encourage their young ones to read on their own.

These are only 15 of the Christian books that helped shape 2016. We hope that we didn’t miss your favorite, but you may want to check out some of the books on this list for yourself. Books across many genres have an amazing ability to impact lives. That’s why, at the K-LOVE Fan Awards, we like to recognize and award the book that made the most impact each year.

To be the first to know which author will take home the award next year and to see all of your favorite Christian singers and bands, register to attend the K-LOVE Fan Awards by clicking on the link below.