The Christian Church and Popular Media: How to Engage 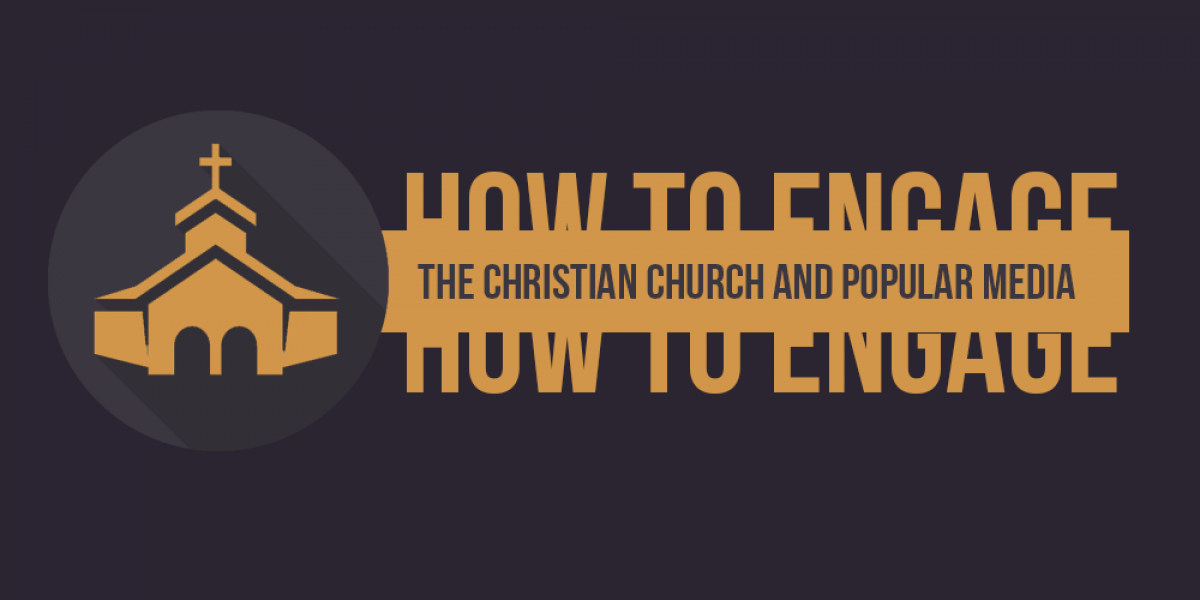 In the particular climate that America finds itself immersed today, there is division, confusion, and perhaps even anger. If we were to go through the streets asking people what’s wrong with the country (maybe even the world) today, there’s a pretty good chance that “the media” would show up in a few answers. That term can include movies, TV, politics, social justice campaigns, and a variety of other topics. How can the Christian Church engage with the world today, especially when it comes to popular media?

For what we’re talking about in this post, let’s constrict the definition of media to pop culture. We all know there are other problems out there, but pop culture is often the subject of boycotts, sermons, and more from the Christian Church.

In, Not of, the World

There is a popular sentiment among Christians that we should be in the world, but not of it. In layman’s terms, we can take part in the secular world so long as we don’t trade God’s ideals for the world’s priorities.

It would be interesting to see what life would be like if Christians completely withdrew from society to fend for ourselves in communities made up entirely of believers. You can find small pockets of people who believe in this isolationism throughout the country, but most Christians would say it’s a bit extreme.

We are called to be part of the world. Not because it’s easier, more fun, or unavoidable, but because there is more to the Christian walk than simply staying locked up in your room reading the Bible. Take a look at Jesus’ ministry during his short time on earth. He didn’t tell the disciples to buy land out in the middle of nowhere so that believers could withdraw from the secular world. He commanded that we go out into the world and make disciples.

So how can the Christian Church be part of the world while not conforming to it? The first step is to be informed on what is going on in the world around us. With an ear to the ground, we can better understand how we can help people, which issues we should be fighting for, and how we can avoid the sinful advances of this world.

Speaking of avoiding sinful advances, the Christian Church has a pretty well-documented history of causing an uproar over the latest releases in pop culture. In recent years, movies like “The Da Vinci Code” and “50 Shades of Grey” have resulted in boycotts, pamphlets and strongly-worded sermons.

Typically the Church only has these harsh reactions when it comes to entertainment that challenges the core of Christian beliefs. With “The Da Vinci Code,” believers were fighting against the idea that Jesus was married to Mary Magdalene among other heretical ideas.

With Christians having the reputation of being against everything, it’s even more important that we choose our battles. That’s not to say that any backlash against past works has been ridiculous, but only that we should be vigilant against real threats to Christianity. The secular world often doesn’t care about the wants and needs of the Christian community, but if we end up like the boy who cried “wolf” in pop culture, our influence will mean even less.

The importance of staying informed is that we will be able to not only recognize dangerous components of pop culture, but we can speak truth against whatever anti-Biblical doctrine they propose.

Christians must engage popular media in order to keep society as a whole from going further off the tracks. That’s why we can’t lash out in prideful anger every time we feel personally offended. Save the speeches and boycotts for the times when it really matters.

Create Your Own Media

Although it’s important for Christians to speak out against media that attacks or misrepresents Biblical truth, Christians should also be telling their own stories. What better way to find more Christian entertainment than to create your own?

For a long time, it seemed that Christianity had essentially given up on having a cultural footprint. Over the last decade or two, though, there has been an explosion in Christian music and film. Films like “Courageous” and “War Room” have given Christian audiences an idea of what it can be like to have quality faith-based films at the local theater.

The reason why having Christian media is so important is because Americans spend roughly ten hours a day consuming content. Yes, over half of our waking day is spent on social media, TV, movies, games, and more. We can all agree that this is too much time spent on these activities, but this is simply where we are right now. As Christian entertainment catches up to Hollywood, how great would it be to have faith-based content making up most of your viewing?

No one is going to argue against the positive effects of putting down our phones and walking outside, but so long as we’re consuming this much content, Christians need to be making their own content.

We should be encouraging Christian artists to make content that glorifies God and speaks to the Christian experience. At the very least, Christians should listen to a fair amount of Christian music and pay to see Christian films in theaters. Consumer decisions like these bring the promise of more future projects.

Lastly, let’s take it back to the simplicity of the Christian life. If we want to impact the world, engage the culture, and make disciples, we need to build up the Christian Church and be better stewards of what God has given us.

When Christians fail to live up to their calling, the message is watered down. We’re all human, but we should strive to be more.

By giving our time and money generously, by serving our neighborhoods and communities, and by drawing closer to the Lord through Bible reading and prayer, Christians will build up the credibility and strength to engage the culture effectively.

At the K-LOVE Fan Awards, we recognize the need for Christian entertainment as well as our need to be a light throughout the world. That’s why we recognize the top entertainers each year who are making an impact through their fields. As the biggest weekend in Christian music, the K-LOVE Fan Awards are the perfect opportunity for fans to see their favorite musicians, filmmakers, athletes and authors all in the same room. Learn how you can join us by clicking on the link below.