Christian Faith in the Entertainment Culture 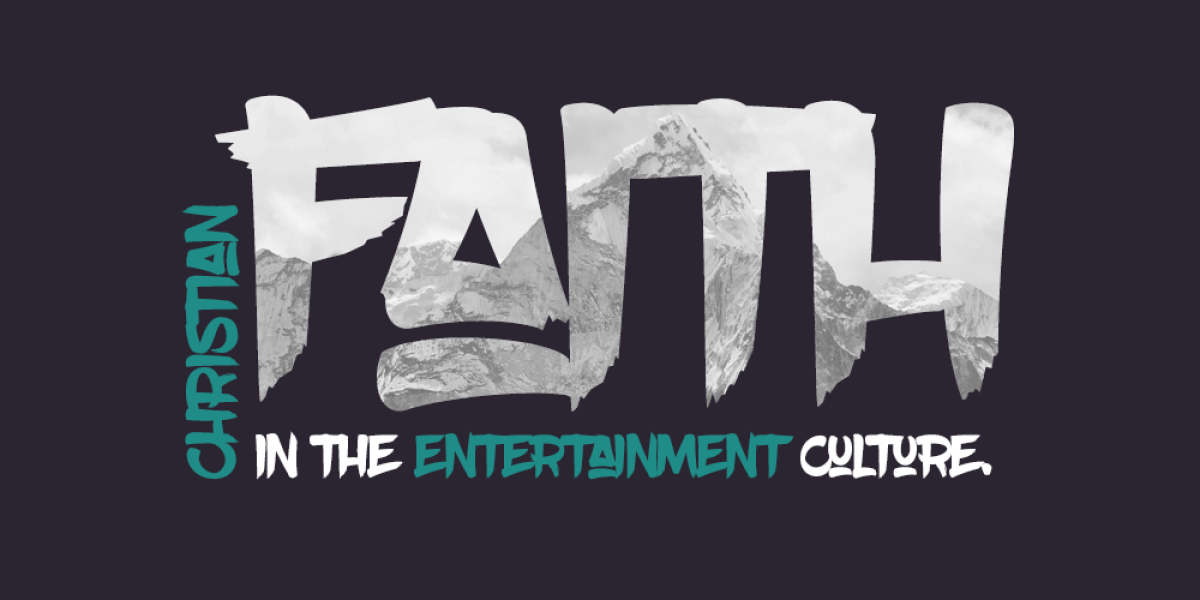 Have you ever thought about the fact that Christian characters rarely make an appearance on your favorite TV shows and movies? According to the Pew Research Center, roughly two out of every three Americans identify as either Protestant or Catholic. Isn’t it strange that the Christian faith rarely makes an appearance in our everyday entertainment options? This leads us to wonder about the kind of impact we are having on the world and what we can do to be better represented.

Before we can examine how Christian faith is being depicted in media, let’s first look at the world of secular entertainment and see the current state of affairs.

The Secular World and Christian Faith

For many, many years, the world of entertainment has grown increasingly less interested in conservative beliefs and Christian values. In television, for example, most of the new shows that are greenlit will be those that challenge your boundaries. Just in the last few years, FOX debuted the show “Lucifer” which is about the devil himself walking the streets of Los Angeles. Based on a comic more than the Bible, it features Lucifer as a dark anti-hero along the lines of characters from “House” or “Breaking Bad.”

You can find many other examples of anti-Biblical characters and concepts all over the TV dial. “The Good Place” is a network comedy that turns Heaven and Hell into punchlines. Thankfully, we are finally coming out of the vampire/werewolf phase of television and movies that often lead to the introduction of demons and angels. The idea of turning religion into entertainment isn’t all that new (“Highway to Heaven,” “Touched By An Angel,” and “Supernatural” for starters), but it shows that the secular world sees the Bible as a work of literature ripe for wild adaptations and/or parody.

Of course, we aren’t seeking to boycott shows or shame people for their viewing preferences. After all, entertainment as a whole is mostly created by non-Christians so almost all of it is flawed theologically. We’re simply noticing patterns and trends.

Aside from TV shows and films that brazenly celebrate the demonic underworld, we see from viewing the majority of programming available that the world is marching to the beat of a very different drummer. Sexual relationships, glorified violence, and constant profanity are hallmarks of many of the shows you see taking home a slew of awards at the Emmys and Oscars. Even when it comes to the nightly news, there is the old saying “if it bleeds, it leads.” There is a cynical philosophy with today’s entertainment that anything wholesome simply isn’t worth telling a story.

But secular entertainment isn’t just about pushing boundaries. A lot of TV and film is about escapism, whether that means superheroes, the Wild West, zombies, or reality shows. The world’s success rate for entertainment breaks down to ‘Does it make you feel good?” Just like enjoying ice cream or potato chips, there’s nothing wrong with indulging in our entertainment culture. Christians simply can’t afford to get lost in it because, at the end of the day, “Does it make you feel good?” is a weak theology. That’s why not having Christian entertainment options is a bad thing. What we watch does have an affect on our personal philosophy.

Credit where it’s due, there have been a few conservative entertainment outlets established in recent years thanks to an ever-expanding list of cable channels. While most of these aren’t strictly Christian, they do offer some safer viewing options. In theaters, films about the Christian faith have gained back some of the ground that had been lost in previous decades. Let’s talk about how Christianity is viewed in our entertainment culture.

We often look back and think about the good ole’ days when entertainment was wholesome and wish that today could be like that. While things have certainly changed over time, let’s not forget that the world was plenty sinful back then too.

One way in which entertainment has evolved over the years is that certain restrictions have been loosened. Profanity, violence, and sex are seen at a level today that would have been unimaginable 30 years ago. Another change that has taken place is in what kind of stories we tell. Years ago, Hollywood spent big bucks on bringing stories from the Bible to life. On TV, movies of the week would tell the story of Noah, Moses, or Jesus.

In today’s entertainment culture, the Christian faith doesn’t have the best representation. Nine times out of ten, if a show features a Christian character, they are usually only there to boycott something or judge someone. On TV shows about high school, the Christian girl is the one who judges the sexually promiscuous protagonist and punishes her by spreading gossip throughout the school. For shows with older demographics, the Christian mom is most likely there to tell her children not to associate with the new kid at school who is poor/African American/not a Christian/etc.

When it comes to film, there are still a lot of those same judgmental characters from TV shows, but the main problem is a complete lack of exposure. In the old days of Hollywood, stories from the Bible often made it to the silver screen. At the very least, films about the Roman empire or medieval days would reference Christianity often. These days, you are far more likely to see films about atheists than Christians, even though the statistics say there are roughly 20 times as many Christians.

Between the Sherwood films (“Courageous,” “War Room,” and others) and the occasional Hollywood project (“Risen”), Christian filmmaking is slowly gaining a platform. There have been some good Christian characters over the years, but having an entire genre of film is still very new for Christians. Although TV and film have backed away from the Christian faith, religious music has seen a meteoric rise.

Christian music has come a long way in the last decade or two. For years, the label of “Christian” has been seen as an eyesore for musicians who want to use their platform for God. The stigma of being a religious musician was meant to let others know that your music was cheesy and lame. While some of those stereotypes have persisted, the genre has grown in talent, diversity, and sound.

How to Encourage Change

There’s no sense in lamenting the lack of Christian representation in popular media if we aren’t going to do anything about it. So what’s the plan? Boycott the Academy Awards? Protest outside the Emmys? Protests and boycotts are fine to take part in, but it’s not always the most productive way of getting your voice heard. On the other hand, it’s an incredibly effective way to make sure people in Hollywood keep stereotyping you as mean people who boycott things and judge people.

One thing you should definitely do is vote with your wallet. The easiest way to voice your displeasure with a movie or director is not buy a ticket. The same can be said with music and album sales. You don’t want to completely retreat from pop culture, but you should think about where you are spending your money. This is different from a boycott in that it’s a personal choice and it doesn’t give the entertainers you’re avoiding any publicity.

You can also encourage change by doing the opposite of this: support Christian entertainment when you can. In January 2017, “The Resurrection of Gavin Stone” received better reviews and featured better known actors than most Christian films usually get. How much money did it make? Very little. To be fair, maybe the film wasn’t showing in an area near you or there was a lot on your plate at the time, but we can’t expect to get more Christian movies if we aren’t willing to go see them.

It turns out that Hollywood will make a movie about anything if they think it will lead to a profit. While there are executives and creators out there who sincerely don’t want to touch anything religious, most of Hollywood will go out on a limb for a project if they think it’s going to make money. So, in review, the two easiest things you can do to create change in the entertainment culture is to support things that reflect your beliefs and to selectively not give your money to people or projects that go against your beliefs.

Beyond that, Christians themselves need to start telling stories. Who else can create films, shows, and music that reflects your views more than yourself? Years ago, there was very little representation for African Americans and other minorities in TV and film. They changed this by creating their own art. Spike Lee (“Do the Right Thing”), John Singleton (“Boyz n the Hood”) and countless other directors brought black cinema out of the niche market and made it mainstream.

Christian entertainment has started to pick up on this in the last few years and the explosion of the Christian music market is a sign. It’s time for those who hold to the Christian faith to start caring about their representation in media.

Why Does It Matter?

Perhaps this all sounds a little silly to you. Why should we care whether or not there are films and TV shows that depict Christians in a positive light? Simply put, art matters. No matter how frivolous you may personally find it, entertainment influences the rest of the culture. If the rest of the country sees the stereotypes of Christians on TV and accepts that those are the values of a Christian, it severely hurts our witness and affects what kinds of opportunities churches can get involved in.

No one is saying that having Christian faith on TV is more important than reading your Bible, witnessing to others, or any other important aspect of Christianity. However, we can’t sit back and let culture decide what our impact is going to be. It’s also nice to be able to gather the family around the TV or host a movie night and have a large selection of family movies to watch. If Christians are willing to support faith-based entertainment and create art of their own, we might just find a world that’s a little more open to the gospel.

If you are someone interested in Christian entertainment, then you know the K-LOVE Fan Awards is the home of the biggest weekend in Christian music all year. Celebrating the biggest achievements in Christian film, music, sports, and books, it is the ultimate fan experience. Find out how your family can attend by clicking on the link below.