Christian Music Artists: Fan Favorites from the '70s to '90s 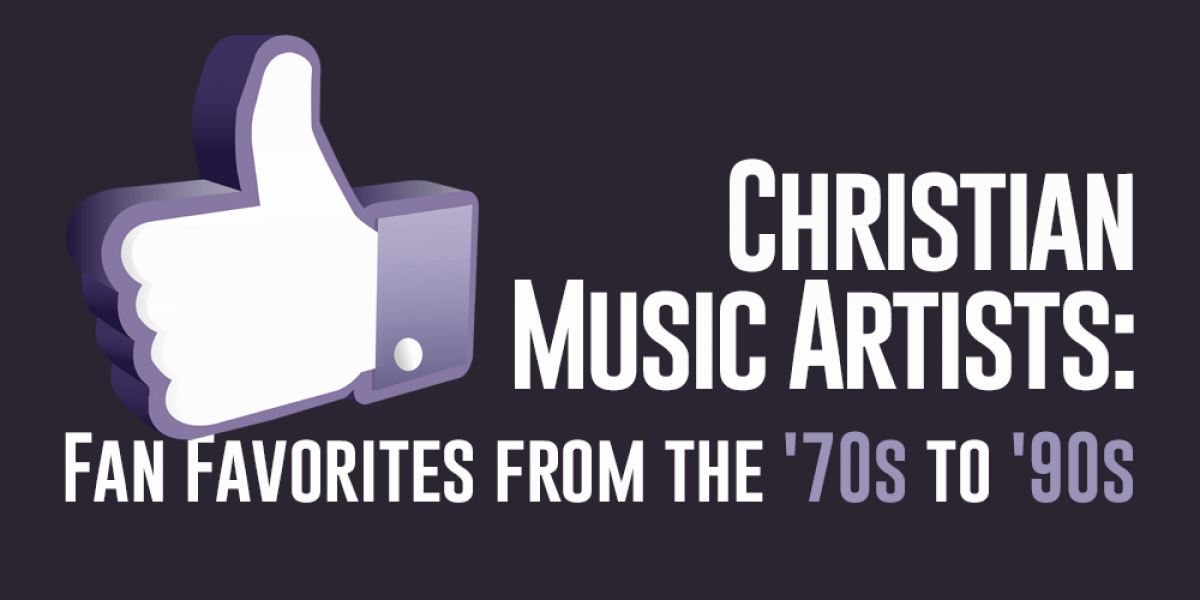 When it comes to entertainment, we all have our favorites. From our preferences and life experiences we formulate favorite movies, albums, TV shows, and more. The same can be said when we discuss Christian music artists. There are bands and singers we grew up listening to that still hold a special place in our hearts. Many times just listening to an old album will mentally transport you back to the first time you heard it. We’ve put together a list of some of the most popular Christian music artists from the ‘70s, ‘80s, and ‘90s. In all fairness, many of these talented musicians are still making music today, but we’ll never forget the contribution that was made earlier in their careers.

Some musicians spend years trying to get a record deal, but Amy Grant had one long before she graduated high school. The singer released her first album, a self-titled project, in 1977. From there she continued to grow into a sensation who had crossover appeal to the mainstream market. Within 10 years of releasing her first album, Grant had racked up several gold and platinum records, a rarity in those times. Much of the singer’s mainstream success took place in the late ‘80s and through the ‘90s, including the album “Heart in Motion” which sold over 5 million copies. For reference, that’s about how many copies Taylor Swift’s latest album sold. Grant has had a long, successful career in music, selling over 30 million records, and continues to release tracks today. Her 2016 album, “Tennessee Christmas,” reached #1 on the US Christian chart.

Another artist who achieved some level of crossover appeal was Michael W. Smith. That’s not the only connection between Smith and Grant, however, as one of Smith’s first big breaks was playing in Grant’s band in the early ‘80s. After working on the Amy Grant tour, Smith gained popularity with a string of successful solo albums to close out the decade. His crossover appeal came with the 1990 album “Go West Young Man” which featured the hit song “Place in This World.” To this day, Michael W. Smith has released more than 20 albums, most of which have had great success. On top of being one of the most popular Christian music artists of all time, he is also an accomplished songwriter. With over 40 Dove Awards and a number of Grammys, it’s hard to argue against Smith’s place on this list.

The late ‘80s brought out a number of Christian hip hop groups, but none of them left a mark quite like DC Talk. The trio, made up of Kevin Max, TobyMac, and Michael Tait, had a number of big hits in the Christian community from 1989 to the end of the century.  After several albums reached the top 10 in Christian album sales, the group hit its peak with the 1995 album “Jesus Freak.” The title track became one of the most popular Christian songs of all time. After making another well-received album (“Supernatural”) in ‘98, the group decided to go on an indefinite hiatus so that each member could follow their own musical path.

Although gospel music and contemporary Christian music come from a similar place, they aren’t quite as linked today as they were a few decades back. Sandi Patty is a gospel singer who found success due to her range and talent. Picking up the nickname “The Voice,” Patty has had a long career which she is currently wrapping up with a farewell tour.  One of the singer’s biggest collaborators was Larnelle Harris, a powerful vocal talent in his own right. The pair made hits out of “More Than Wonderful” and “I’ve Just Seen Jesus.” Patty collected 39 Dove Awards, five Grammys, and four Billboard Music Awards during her career. Among those Dove Awards are 11 straight years of being the Female Vocalist of the Year.

Carman was a busy man in the ‘80s and ‘90s, releasing albums what seemed like every year. The singer was a bit of a jack of all trades, performing gospel, hip hop, spoken word, and everything in between. Among his most famous hits are “America Again,” “The Courtroom,” and “Who’s in the House?” Carman received a terminal medical diagnosis in 2013, but the singer used the setback as inspiration for a new crowdfunded album.

As one of the oldest Christian rock acts ever, Petra saw several shake ups in its members over the years. Starting in the ‘70s, the group faced a lot of struggles from both the secular world and the church as people came to grips with the idea of Christian music that sounds like rock and roll. Petra called it quits in the early ‘00s, but put together a short-lived comeback only a few years ago. Among the group’s accomplishments are 10 Dove Awards and induction into both the Gospel and Christian Music Halls of Fame.

Chapman is one of the biggest Christian music artists of all time. Starting out in the mid-to-late ‘80s as a singer/songwriter, he put together several popular songs like “His Eyes,” “I Will Be Here,” and “More to This Life.” One of the hardest things to do as an artist is to stay relevant. With 30 years in the industry, Chapman has been able to consistently put out good music while also raising a family. To date, the artist holds the record for the most Dove Awards with 58. Tack that on with five Grammys and over 20 albums and it’s a music career that anyone would envy.

After releasing an album as a child, Paris returned to Christian music in the early ‘80s. She found success with her early albums, but it wasn’t until the early ‘90s that she reached the top of the industry. Among her 10 Dove Awards are a three-peat for Female Vocalist of the Year from 1993-1995. Paris had a number of popular singles over the years. “God is in Control,” “He is Exalted,” and “The Warrior is a Child” are just a few of the chart-toppers Paris lent her vocal talents to during her career.

If you listened to Christian music in the ‘90s, there’s a good chance you owned at least one 4HIM album. The quartet of singers was known for putting together thoughtful melodies like “The Basics of Life,” “A Strange Way to Save the World,” and “Where There is Faith.” Although the band was only active for around 16 years, they were able to release 11 studio albums and a few compilations as well as rack up eight Dove Awards.

There are very few people who have influenced Christian music quite like Bill and Gloria Gaither. Not just as Christian music artists, but as hymn lovers who brought many beloved songs back into the limelight. On the songwriting side, the married duo has written many cherished songs including “He Touched Me,” “The King is Coming,” and “Because He Lives.” Anyone who enjoys the old hymns has likely tuned in for a Gaither Homecoming Concert or two. Having been involved in Christian music for nearly 60 years (and winning nearly 30 Dove Awards), there aren’t many people who have had the opportunity to lead quite like the Gaithers.

The last three artists here all enjoyed success before and after the turn of the millennium, but we feel comfortable enough placing them here. Jars of Clay gave Christian music artists a new look when the song “Flood” hit the airwaves in the mid-90s. Seen as a breath of fresh air in the Christian genre, Jars of Clay gave listeners an alternative rock sound that fit the time period. While that song and the self-titled album’s other hit, “Love Song for a Savior,” remain some of the band’s biggest hits, Jars of Clay has sparked some buzz with newer work like “Dead Man (Carry Me).” All in all, the band has garnered 15 Dove Awards and three Grammys.

A few years before secular radio found teenage pop stars in Britney Spears and Christina Aguilera, a young Jaci Velasquez broke out in the Christian music scene. Her debut album, “Heavenly Place,” came out around the time the singer was having her 17th birthday. The album would go on to reach platinum status and it wouldn’t be alone. Velasquez has also released a number of Spanish language albums as well. “Mi Corazón” and “Llegar A Ti” each sold over a million copies in their own right. The singer has continued her singing career to this day, as she just released a 2017 album titled “Trust.” So far, she has earned seven Dove Awards including New Artist of the Year and two for Female Vocalist of the Year.

Our last artist is one who took the industry by storm in the mid-90s. Point of Grace was a quartet of talented women who sparked hit songs like “The Great Divide” and more than 20 other #1 Christian singles. Another high point in the group’s career was the 1999 holiday album “A Christmas Story.” With great songs like “When Love Came Down” and “One King,” it quickly became a favorite among Christian listeners. The quartet became a trio just over ten years into the business. Still making music today, Point of Grace has won 14 Dove Awards along the way.

These 13 artists combined have won 281 Dove Awards and 38 Grammys. If we factor in TobyMac’s solo career, those numbers jump even higher. We know that there are many great artists who didn’t quite make this list, but here we have a representation of fan favorite Christian music artists over a 30-year period. During that time, the industry’s sound changed a few times. There have been even more changes since then. We are thankful for the many artists who have supplied the music of our faith in both past and present.

The K-LOVE Fan Awards exists to celebrate the artists, authors, athletes, and more who have inspired the Christian community over the course of the year. The event features the biggest performances and most memorable weekend one could hope for. Find out how you and your family can attend by clicking on the link below.