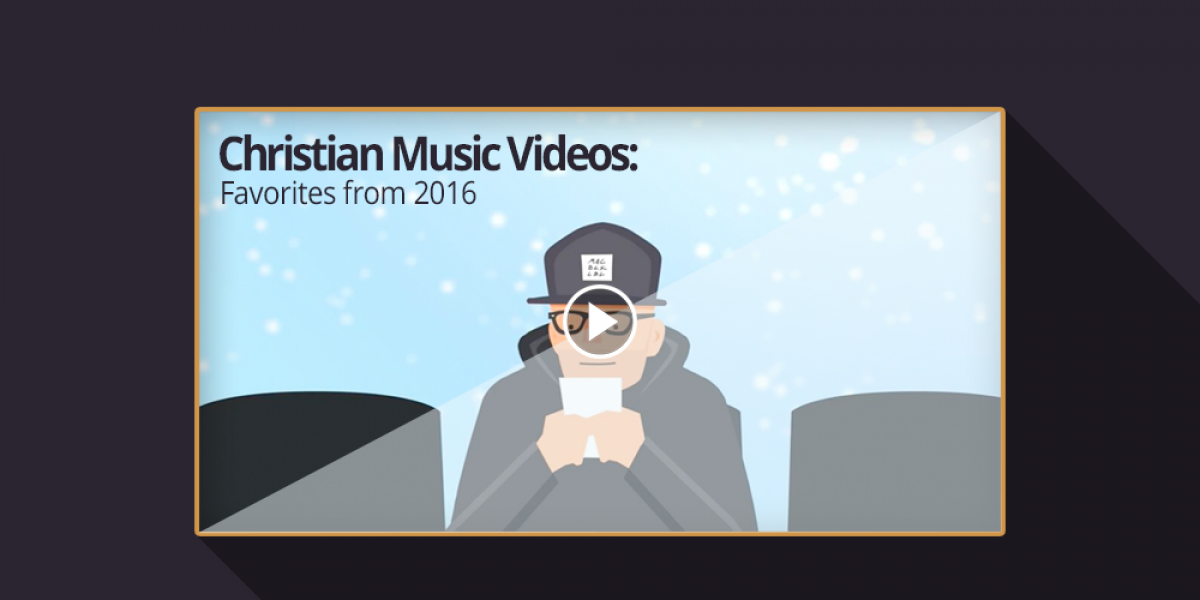 The first music video to ever be shown on MTV was “Video Killed the Radio Star” by The Buggles in August 1981. While that moment was a major turning point for the recording industry, music had already been influenced by television for decades. Since those days, media has drastically changed, but music videos continue to provide fans with an alternate format through which they can enjoy their favorite songs. Shortly after MTV changed the music landscape, Christian music videos also began to pop up.

While that particular channel doesn’t have much involvement with music lately, music videos are still popular among fans of country, hip hop, and other genres. As technology advances and Christian entertainment gains an audience, Christian music videos are a popular way to dig deeper with today’s biggest songs.

With 2016 now behind us, let’s look back at some of our favorite Christian music videos the year gave us.

This breakout single from Zach Williams saw a meteoric rise in popularity over the course of 2016. Focusing on the freedom found in Christ, the song shares how the struggles of addiction, illness, or bad decisions can be overcome through seeking the Lord.

The video for “Chain Breaker” tells the story of a mom who is strung out on pills and alcohol and the daughter who is fighting to help her. On top of a catchy, moving song, the video adds an extra layer of truth in that sometimes our biggest struggles take years to overcome. It can be a slow process, but God is there through it all.

You can read more about this song and the other popular Christian songs of 2016 at an earlier piece we wrote.

Needtobreathe released its newest album, “Hard Love,” in July 2016 with a new sound distinct from the band’s previous work. Featuring great singles like “Testify” and the album’s title track, the group continues to update its sound and challenge itself.

“Happiness” is a fun beat that adds elements like a gospel choir to singer Bear Rinehart’s soulful vocals. The video captures the American idea of the “pursuit of happiness” on a human level of pursuing the things we want and addressing the problems we face along the way. The song may be a little more modern than some of the band’s previous music, but there’s no denying that it's catchy.

We could not put together a list of great Christian music videos in 2016 and not mention the powerful album “Of Dirt and Grace (Live From the Land).” If you’ve ever been in a church, there’s a good chance you know Hillsong’s impact on worship music.

With this re-imagining of the group’s 2015 album, “Empires,” the songs are given extra weight. Performed and recorded in the Holy Land, we can see the locations written about in the Bible while listening to some amazing worship music. “Prince of Peace” is only one of the many great songs found on this album, but it is powerful nonetheless. Another great entry on the album is “Oceans (Where Feet May Fail),” which was recorded on a boat in the Sea of Galilee.

We talked about Hillsong United’s work and many of the other top worship songs of 2016 in an earlier blog post.

Releasing the album “Beautiful Offerings” in Fall 2015, Big Daddy Weave had a pair of hits with “My Story” and “The Lion and the Lamb.” Although “Jesus I Believe” didn’t get quite the reception that those songs did, it was given new life this year with a tearjerker of a music video.

Unlike most Christian music videos, this one doesn’t feature the band at all. Instead, it’s more of a short film set to the Big Daddy Weave song. In this moving story, a young mother faces the prospect of a frightening medical diagnosis and comes to terms with what she believes about God.

Challenging the style of many contemporary Christian recording artists, Britt Nicole’s self-titled 2016 album fully embraces the pop sound and 80’s throwback aesthetic. The first single off of the album is “Through Your Eyes,” which tells the importance of seeing our personal value as something greater than as we often see our flawed selves.

“Pave” is the first track from Nicole’s self-titled album to get the video treatment. Not your typical Christian single, the music video is a love letter to the artist’s daughter. Featuring the little girl throughout the video (as well as the occasional vocals), the song is big on following your dreams and not being scared to believe in yourself. The video itself features some impressive scenery and splashes of neon that match the album’s style.

These three guys have had such an impact on the Christian music industry. Aside from the obvious DC Talk days, Kevin Max (Audio Adrenaline) and Michael Tait (Newsboys) have given other bands new life by filling in as lead vocalist. Throw in Toby’s three Grammys and 19 Dove Awards (post-DC Talk) and the three men have left quite the imprint.

On TobyMac’s 2015 album, “This Is Not a Test,” the singer had the opportunity to bring the guys back together. “Love Feels Like” is a song that will get you swaying to the beat and the live concert video proves that Toby still puts on a great show after all these years. Even though Tait and Max are only present in video form, it’s great to see everyone back together again.

Tomlin has been one of the biggest worship leaders in America for most of the 21st century. As he continues to pour out hits like “Good Good Father” and “How Great is Our God,” the singer looks for new ways to reach an audience.

With his music video for “Jesus,” Tomlin called on his fans to submit video testimonials about the times that God came through for them. Playing against the backdrop of their stories, the worship song rings even more true. The style of the video is simple but incredibly effective.

Check out Chris Tomlin and the other top singers and performers of 2016.

With his signature beard and raspy voice, David Crowder has long given off the impression of a grungy Southern rocker. “Run Devil Run,” one of last year’s memorable Christian music videos, further solidifies this look with an aesthetic that suggests a mixing of post-apocalyptic films and the old South.

The video features a car chase through a mostly forgotten town. Racing through abandoned parking lots and past burning houses, the video has an especially bleak backdrop for its upbeat song. With its climactic airboat chase through a swamp, the video shows that the dark clouds hanging overhead may just dissipate. “Run Devil Run” is a fun song that

While some Christian music videos are great because of their high concepts and/or production values, others resonate because of their moving simplicity. The video for “Fullness” from Elevation Worship is an example of the latter.

The worship group has created a number of these live recordings in the last couple of years. It doesn’t really matter which song you pick because they are all pretty intense worship sessions.  Whether or not you’ve ever listened to one of the group’s CDs, these videos will pull you into a time of worship in mere seconds.

Skillet is one of the few Christian bands that might have more secular fans than religious ones. While the vast majority of Skillet’s music does address its members’ faith, a lot of music lovers just appreciate the band’s sound. One of the group’s latest hits is a song called “Stars.”

The video for “Stars” is pretty ambitious as far as Christian music videos go. You rarely get a good shot of the band throughout the entire music video because most of the time the camera swirls around the cosmos and explores the universe being sung about. To break the song down in the simplest terms, the message is that if God can create and maintain all of creation, he can handle whatever you’re going through.

Read more about Skillet and some of the other artists on this list in our Most Popular Christian Bands of 2016 post.

“Your Love Awakens Me” - Phil Wickham

Last, but certainly not least, is this upbeat hit from California native Phil Wickham. As part of his 2016 album, “Children of God,” the artist released a video for the record’s biggest single, “Your Love Awakens Me.”

Both the song and its video feature some pretty heavy West Coast influences, which is a nice break from some of the other Christian music videos out there. On top of its stylistic choices, the video also features a lot of locations from around southern California. “Your Love Awakens Me” is a celebratory song that will put a little pep in your step.

Whether it’s the music or the videos that go along with them, 2016 brought us some powerful songs that deliver hope, inspiration, and strength through the most difficult of times.

At the K-LOVE Fan Awards, we understand how much of an impact these songs can have on your faith and daily routine. That’s why we take time each year to honor the bands that made the biggest impact on the Christian community. The best part about the K-LOVE Fan Awards, though, is that the fans get to nominate and vote for their favorite artists. To get your family in on the biggest weekend in Christian music, click on the link below.