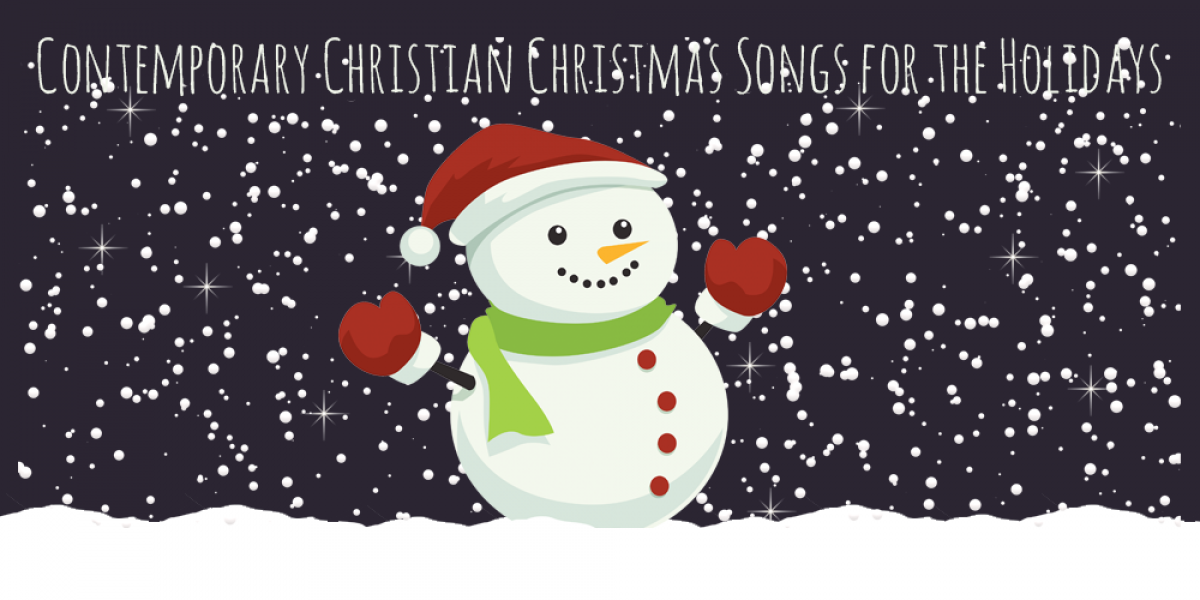 No matter the genre, pretty much every band has put out some form of Christmas music to entertain their fans. Unlike other styles of music, though, the message of Christmas music is very close to the heart of the songs already sung by Christian artists. There’s certainly nothing wrong with enjoying a secular artist’s cover of “Silent Night,” but with contemporary Christian Christmas songs, you know that the music is being sung with sincerity by a fellow believer.

With Christmas hymns going back into the 16th century and beyond, there are countless songs out there for Christian artists to cover. On top of the many classics, most musicians put together original Christmas songs for their holiday albums as well. Listed below are some great contemporary Christian Christmas songs from many of your favorite artists. There are simply too many wonderful songs out there to hit them all, but we hope this serves as an adequate representation of the great Christmas music being produced.

In 2015, Danny Gokey released his second Christian album, “Christmas Is Here.” Building off of the success of his first album, “Hope in Front of Me,” this seasonal recording shows off more of the singer’s talented voice as he covers classic songs like “White Christmas” and “O, Holy Night.”

One of the highlights of the record is the singer’s cover of “Mary, Did You Know?” If you want something newer and upbeat, “Lift Up Your Eyes” is a great song too.

Phil Wickham’s Christmas album, “Songs for Christmas,” is one of the best Christian holiday albums to be released in recent years. Put out in 2011, the singer/songwriter’s adaptation of “The First Noel” has an upbeat acoustic vibe that gives the song some life. Other highlights include “Evermore” and “Christmas Time.”

The whole album has a nice, toned-down feel which allows Wickham’s voice to really stand out. If you want something a little slower and softer in your Christmas playlist, you might add a few of the songs off this album. Here's a video of Phil Wickham playing "The First Noel" with the guys from Shane and Shane.

“When Hope Came Down” - Kari Jobe

Kari Jobe released an extended Christmas edition of her album “Where I Find You” in 2012. This re-release features 3 new songs, including “When Hope Came Down.” The song is full of hope and will give you a break from the traditional songs that might tire you.

If you prefer the classics, Jobe put out another Christmas album in 2007 titled “Bethlehem.” This album features covers of all your favorites like “Have Yourself a Merry Little Christmas” and “O Little Town of Bethlehem/Away in a Manger.”

It’s always nice to see how bands will adapt Christmas songs to fit their own style. With its album “Christ is Come,” Big Daddy Weave puts together a holiday album that blends classics with the band’s Southern roots.

The album’s title track is a great worship song that fits in with the message of the other Christmas hits. Winner of the Dove Award for Christmas Album of the Year, “Christ is Come” has plenty of juice to get you in the Christmas spirit.

“Carol of the Bells/What Child is This?” - Point of Grace

Christmas albums from Point of Grace were pretty much the gold standard in the late 90’s and early 2000’s. In fact, the group’s 1999 Christmas album, “A Christmas Story,” was gold-certified. Featuring great songs like “One King” and an adaptation of “O Holy Night,” the album gives the group’s four women the chance to show off each of their talents.

“Carol of the Bells/What Child is This?” is another classic from Point of Grace. “A Christmas Story” isn’t the only great Christmas album from this group either. Check out 2005’s “Winter Wonderland” or even 2010’s “Home for the Holidays” for more contemporary Christian Christmas songs that you’ll cherish this Christmas.

As one of the biggest bands in Christian music for 15 years, it should be no surprise that MercyMe has two quality Christmas albums. Released in 2005, “The Christmas Sessions” contains a great adaptation of “God Rest Ye Merry Gentlemen” and a sentimental original in “Joseph’s Lullaby.” Don't forget about the second album, which has even more contemporary Christian Christmas songs.

The group’s other holiday album is 2015’s “MercyMe, It’s Christmas!” This record features non-religious classics like “I’ll Be Home For Christmas” and “Have a Holly Jolly Christmas,” but their rendition of “Go Tell It On the Mountain” is pretty great.

Similar to the previously mentioned Point of Grace, BarlowGirl was an all-girl trio until they disbanded in 2012. Their one Christmas album, “Home for Christmas,” has some of the classics you would expect to find as well as a few different choices.

Among the covers is a really good version of “Carol of the Bells” mixed with “Sing We Now of Christmas.” You can also find a great original in “Hallelujah (Light Has Come).” It may be the group’s only crack at a Christmas album, but it did earn them a nomination at the Dove Awards for Christmas Album of the Year.

“I Heard the Bells on Christmas Day” - Casting Crowns

Around the same time BarlowGirl was putting out their Christmas album, Casting Crowns produced one of their own. “Peace on Earth” features a long list of great Christmas covers, but the standouts are “I Heard the Bells on Christmas Day” and “O Come All Ye Faithful.”

Another great song from the album is “While You Were Sleeping,” which was first released on Casting Crowns’ 2005 album, “Lifesong.”

Singer Francesca Battistelli released her holiday album, appropriately titled “Christmas,” in 2012. Among her original songs on the record is “Heaven Everywhere” which employs a few measures of “Angels We Have Heard on High.” Other new songs include the fun “Christmas Is” and the heartfelt “You’re Here.”

For the classics, you have great covers of “What Child Is This?” and “Joy to the World.” There are more than a few contemporary Christian Christmas songs that the singer can add to her list of hits.

With four Christmas albums under his belt, Steven Curtis Chapman has covered pretty much all of the standard Christmas songs. 2012’s “Joy” has a few of the classics, but most of the songs will be ones you’re hearing for the first time.

Among the newer songs are the heartwarming “Christmas Card,” the playful “Christmas Kiss” and “I Am Joseph (God With Us).” As an experienced artist, Chapman weaves through several genres effortlessly in what is yet another good album full of contemporary Christian Christmas songs.

If you get tired of the Bing Crosby-like singers around Christmas time, pop in something really different like Rend Collective’s “Campfire Christmas, Vol. 1.” This Northern Irish band will mix up your Christmas playlist in the best way.

Their Christmas album features most of the classic holiday songs sung in a fashion unique to the band’s style. “Hark! The Herald Angels Sing (Glory in the Highest)” is only one of the great covers found on the album.  Other great songs include “Merry Christmas Everyone” and “Ding Dong Merrily on High (The Celebration’s Starting).”

It only makes sense that one of the world’s most popular worship leaders would record his Christmas album live. Released in 2009, “Glory in the Highest: Christmas Songs of Worship” features several holiday songs that could easily be sung in worship on Sunday mornings.

Among the best songs on the album are “Joy to the World (Unspeakable Joy)” and “Angels We Have Heard On High.” Tomlin also joins up with Audrey Assad for “Winter Snow,” another of the great contemporary Christian Christmas songs.

We’ve mentioned several non-traditional Christmas albums from Christian artists but Kim Walker-Smith’s “When Christmas Comes” is about as quintessential Christmas as you can get. The 2014 album features 17 songs, so you should be able to find plenty of Christmas songs to fill your time.

Among the great Christmas renditions is a great cover of “O Come, O Come, Emmanuel.” A few of the other highlights are “Carol of the Bells” and “Silent Night.”

Lastly, we’ll point you in the direction of Third Day’s 2006 album, “Christmas Offerings.” The album is a pretty standard Christmas record as far as song selection goes, but the band does a really good job of delivering on these Christmas classics.

Singer Mac Powell’s voice does a lot of the heavy lifting when it comes to livening up songs like “Do You Hear What I Hear?” Some other great Christmas songs found on the album are “Born in Bethlehem,” “Away in a Manger,” and “What Child is This?”

Again, these are only a few of the great contemporary Christian Christmas songs you can find out there. For a list of new Christian songs for the holidays, check out this piece we wrote earlier. We hope we didn’t miss your favorite, but feel free to check out some of our suggestions. You might just find something new for your Christmas festivities.

Music plays a big part in our lives, not just around the holidays. For Christian music fans that love live music and meeting their favorite artists, the K-LOVE Fan Awards are a no-brainer Christmas gift. To find out how you and your family can join us for next year’s ultimate fan experience, click on the link below.