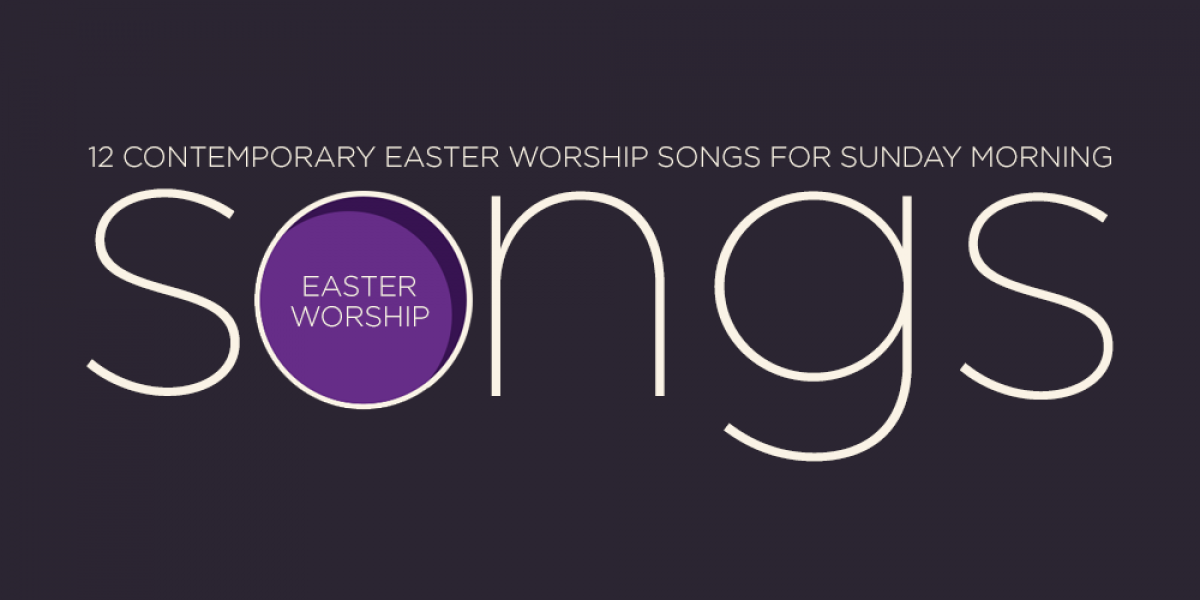 Arguably the most important event in human history, the resurrection of Jesus is the focus of a multitude of Christian songs, films, and books. Through these works we learn more about the power of the resurrection and what it means for us today. Looking at the Christian music landscape, there are a number of popular Easter worship songs that help us mark this momentous occasion. For classic easter hymns, check out this earlier piece we wrote. Let’s look at a few of the contemporary Easter worship songs that are great additions to the weekend’s lineup.

Coming from Matt Maher’s fifth album, “Alive Again,” this track quickly became a popular easter worship song. It charted highly in both the Hot Christian Songs and Digital Song Sales categories. With a very catchy and melodic chorus, the song is a celebration of Christ’s resurrection. “Christ Is Risen” hits its stride with the lines “O death, where is your sting? / O hell, where is your victory? / O church, come stand in the light / The glory of God has defeated the night.”

“Lead Me to the Cross” - Francesca Battistelli

This is one of those Easter worship songs that has been covered by many artists. Hillsong United, Chris and Conrad, and Newsboys are just a few of the acts who have also released popular renditions on top of Battistelli’s. The song is a powerful worship ballad that contemplates the sacrifice of the cross and has the singer begging to approach the site of his/her redemption. In the same spirit of worship songs like “The Heart of Worship,” this song seeks to strip away all distractions and to focus on only the most important things.

With a string of #1 albums, Tomlin is one of the biggest solo acts in Christian music. His latest album, “Never Lose Sight,” had a juggernaut of a single with “Good Good Father.” Sitting on the Hot Christian Songs chart for nearly a year, the song’s simple chorus has a deep resonance that hits you like a wave of comfort. On Easter Sunday, it’s important to think of God’s paternal aspects and how that relationship played out on the cross.

Jobe has been making her mark as a worship leader for years now with songs like “You Are For Me” and leading worship with Gateway. The live worship album, “Majestic,” features a number of great tracks like “I Am Not Alone” and “Holy Spirit.” Another song from the album is “Forever” which makes our list of great Easter worship songs. “Forever” covers the death and resurrection of Jesus in such a powerful way, first mourning his suffering on the cross but then erupting into joy over his resurrection. “The ground began to shake / The stone was rolled away / His perfect love could not be overcome / Now death where is your sting? / Our resurrected King / Has rendered you defeated”

This Casting Crowns song is another Easter song that examines the full events of the crucifixion and resurrection. Coming from the band’s fourth studio album, “Until the Whole World Hears,” the song chronicles Jesus’ journey to earth, His death and resurrection, and the hope of his returning one day. The chorus breaks it down very effectively with these lyrics: “Living, He loved me / Dying, He saved me / Buried, He carried my sins far away / Rising, He justified freely forever / One day He’s coming / Oh Glorious day.”

“Because He Lives (Amen)” - Matt Maher

The Canadian singer/songwriter is back on our list of contemporary Easter worship songs, this time for the 2014 song “Because He Lives (Amen).” As of now, the song is Maher’s highest charting tune, resonating with a wide audience. Playing off the song of a similar name by Bill and Gloria Gaither, the track celebrates the realization that, because of Jesus’ sacrifice and victory over death, we can experience joy and victory in our own lives. What a great thought to consider on this Easter weekend.

Becoming one of the biggest breakout acts in recent memory, Lauren Daigle’s voice on “How Can It Be?” is soulful and really brings the message home. The song isn’t so much about the events of Easter itself, but rather the effects of Christ’s sacrifice. Instead of being held down by a sinful past, we can experience freedom and love because of what Christ did on the cross. We don’t have to fear death because we know the One who has already conquered it.

Another great song from Chris Tomlin, “At the Cross (Love Ran Red)” is a song that proclaims the site of the cross as the central point for where our forgiveness and redemption came into being. There are several important aspects to the death and resurrection of Jesus Christ. When we consider the sacrifice that was made for us on the cross, the only response is to bow down at His feet.

Coming off of the group’s 2010 live album “This Is Our God,” this song is full of victory. “Stronger” begins by establishing the power of the cross and how Christ was able to defeat the grave. Then, it moves on to say that this same strength can be found within us because Christ has taken residence within us. It’s a powerful song that helps us to look beyond the cross and the resurrection to see how both of these events can affect us today. Here’s the empowering chorus: “You are stronger, you are stronger / Sin is broken, you have saved me / It is written, Christ is risen! / Jesus, you are Lord of all.”

Speaking of songs that are empowering, “We Believe” is a song that will fill you with enthusiastic worship any day of the week. This is a faith affirming song that allows us to examine the very things that we hold dear and to conclude that they matter. While the resurrection is only one component of the song, Easter is a great time to take inventory in yourself and rededicate your heart to these beliefs.

Some Easter worship songs are loud and victorious while others are simple and introspective. “By His Wounds” is the latter. Appearing on the 2007 compilation album “Glory Revealed,” this track features the vocal talent of several great singers. The lyrics are taken from Psalm 53, which is often titled “The Suffering Servant.” It is a prophecy about Jesus that details His life and the manner in which He dies. This is a thoughtful song full of gratitude that reaffirms our status as redeemed through His blood.

Finally, we’ll look at a song that details the final hours of Jesus’ life and the impact it has on us today. As one of the most trusted names in songwriting, Hillsong has put together another great worship song here. “Man of Sorrows” is yet another song celebrating Christ’s victory over death. The song is a wonderful addition to any Easter service and/or great for reflecting on the meaning of this day in your own time.

We hope this list of contemporary Easter worship songs has introduced you to a few great songs. There are also a lot of wonderful Christian songs that we were unable to get to in just one piece. As we come to this powerful day in history, we ask you to consider Christ’s sacrifice and the impact it has on your life. Reflect on songs like these, read the account of His resurrection in the Bible, pray, or do any combination of these or other activities.

The K-LOVE Fan Awards seek to honor the musicians, authors, athletes, and filmmakers who are making an impact in the Christian community as well as reaching the secular world. We know that these factors can have a profound influence on the lives of believers. As the biggest fan-voted award show in Christian entertainment, we bring together the biggest names for one weekend to celebrate the year’s achievements. Find out how you can get in on the festivities by clicking below.