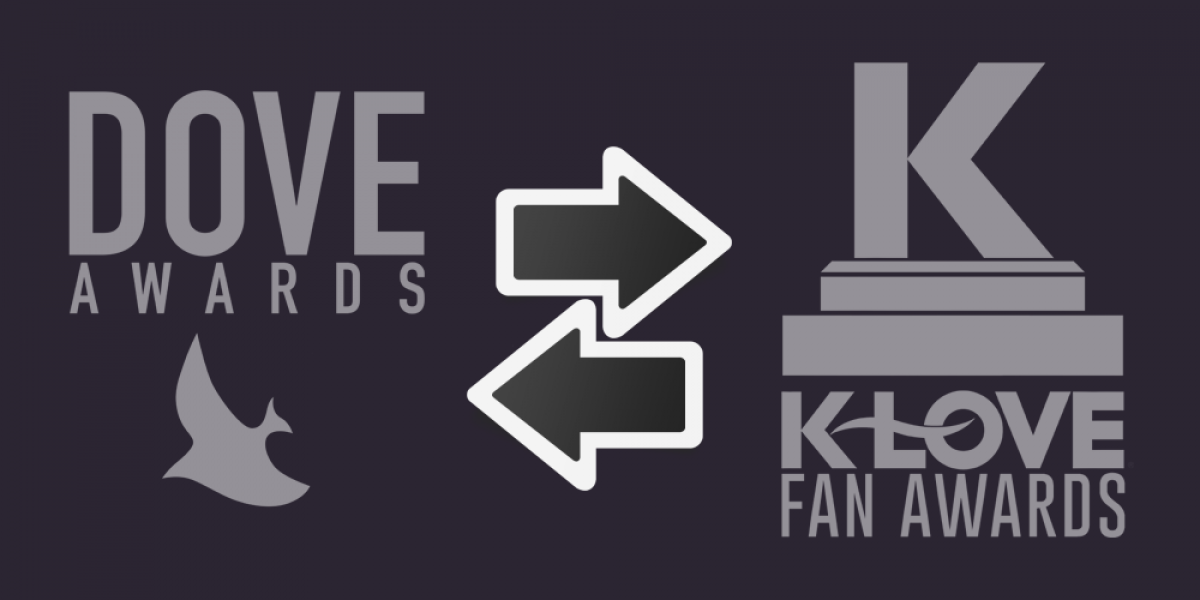 Christian music is a very diverse field of musicians, so it only makes sense that there would be a variety of awards shows to cater to that industry. The Dove Awards, arguably the biggest measurement of success in Christian music, are a longstanding tradition in the Christian music world.

For anyone who may not be aware of what exactly those awards consist of, we’ve provided a few key details below. We’re also comparing them to the K-LOVE Fan Awards, just so fans and audiences of Christian music understand what makes them alike and how they are different.

Without further ado, let’s check out the history of these awards shows.

This year, the Gospel Music Association celebrated the 47th year of the Dove Awards. Instituted in 1969, the GMA wanted to celebrate Christian music in much the same way that other forms of media are honored with the Academy Awards or Grammys. Bill Gaither, an icon of the genre, was one of many voices that helped the Dove Awards come into existence.

The awards have made a few changes over the years. Though the event is traditionally held in Nashville, TN, there have been a few years where Memphis, TN and Atlanta, GA had the honor of hosting.

With the changing landscape of music that one might anticipate over nearly 50 years, awards have changed definitions or been added/dropped in that time. The most recent big change was adding “Inspirational Film of the Year,” an award that went to “War Room” in 2016. The designations of male and female artists of the year were also dropped so that different musical categories could be added to the lineup.

The Dove Awards are voted on by members of the Gospel Music Association. Though the majority of this group consists of industry professionals, fans of the genre can purchase membership for $25/year. Membership comes with benefits like discounted Dove Awards tickets and voting rights, among other opportunities.

The K-LOVE Fan Awards were created in 2013 and were held at the Ryman Auditorium in Nashville, TN. Though the venue is a great host for Christian music, the event has since moved to the Grand Ole Opry and the Gaylord Opryland Resort. This allows for all of the weekend’s festivities to essentially be held under one roof.

Celebrating its fourth anniversary in 2016, these awards are voted on by the fans. Nominations occur in the winter/spring before the summer awards show. Once the nominees are locked in, fans have several weeks to vote on their favorite artists. With voting being free, fans have the opportunity to cast ballots simply by typing in their email addresses. The nominees aren't the only ones that can win something either. Last year, every fan who voted was entered to win admission to the brand new Museum of the Bible in Washington, D.C.

Since the Dove Awards cover more musical genres, there is a rather strong distinction in the number of awards they give out compared to the K-LOVE Fan Awards.

At the 47th Dove Awards, there were over 40 categories with an award handed out. While many of these consist of your standard awards like “Song of the Year,” there are lesser-known winners in categories like “Youth/Children’s Musical of the Year” and “Choral Collection of the Year.” Similar to the Grammys, many of these categories are awarded outside of the televised show.

The performances at the Dove Awards are also quite varied in genre as well. While you might see well-known names like Kari Jobe or Chris Tomlin, you might also hear from an artist whose work you’re unfamiliar with. The show does try to pack in a lot of performers because of the amount of artists the GMA represents.

With only a few years under its belt, the K-LOVE Fan Awards have a different approach when it comes to award categories. Since the nominations are more linked to radio play on stations like K-LOVE, the results skew more to groups within the CCM (Contemporary Christian Music) branch of the genre.

Performances this year included big names like TobyMac, Switchfoot, and David Crowder, as well as up-and-coming acts like Jordan Feliz. The latter won New Artist of the Year at the Dove Awards and was nominated for Breakout Single at the K-LOVE Fan Awards.

Both awards shows try to give their audiences the chance to see their favorite artists live. Besides, musical performances are much more exciting than just hearing names read off of a sheet of paper.

With the K-LOVE Fan Awards, you also have the experience of seeing your favorite musicians in concert throughout the weekend or finding them at one of the many artist meet and greets.

Cost and Other Expenses - Dove Awards and K-LOVE Fan Awards

So now that you know the main differences between the awards shows, let’s talk about what you really want to know: how much is this going to cost me?

If you’re wanting to attend either of these awards shows (or both, if you’re a Nashville resident with the time/money), it’s very important to plan ahead. Like any other family vacation or night out on the town, you’re probably going to enjoy these more if you have a game plan going in. Also, you never know when the shows will sell out. The K-LOVE Fan Awards sell out of most ticket price points and the recent Dove Awards was a sellout as well.

As far as the awards ceremony itself, Dove Awards tickets range in price from $35 to $200 depending on where you want to sit. There is also a VIP Experience that they provide for an additional $125/person. This includes dinner and hors d’oeuvres while watching the show’s rehearsal and a chance to walk the red carpet among other perks.

The Dove Awards are a one-night event, so you will want to think about hotel options for that night (usually a Tuesday) or you can incorporate the awards show into a longer vacation. Nashville is a great city, especially if you’re a music lover.

Also, business/formal attire is encouraged as these awards are more of an industry event. You might make it on TV, so it never hurts to think about your wardrobe.

Now when you try to compare the costs associated with the Dove Awards and those of the K-LOVE Fan Awards, you have to keep in mind that these are very different kinds of events.

To truly embrace the K-LOVE Fan Awards, you’ll want to take part in the ultimate fan experience  that last all weekend. The actual awards are handed out on Sunday evening, but Friday night is when the action starts. There are a few tickets released for just the Sunday night ceremony ($70) but picking out a weekend package is the best way to make sure you have a seat for the ceremony. Weekend packages also guarantee your family a room in the Gaylord Opryland Resort, the biggest American hotel and resort outside of Las Vegas. Since most of the action takes place at the Opryland Resort, it makes sense to stay there if you’re not from Nashville. By no means are you required to, though. With the insane amount of growth that Nashville is experiencing combined with construction trying to keep up, tourists may find that nearby hotels are getting rather expensive. There are a variety of room options if you do decide to stay at the Gaylord Opryland Resort.

You can find out more about the pricing options in an article we wrote here, but know that event-only passes (include all of the weekend festivities minus food and lodging) are $499 for adults, $299 for kids between ages 3 and 12. Kids under 3 get in for free. For all of the activities you’re experiencing, these passes are valued at over $1100 each.

Of course, with the events taking place over the course of a weekend, you can expect to pay more for several nights in hotel vs. one night for the Dove Awards. Choosing one of the packages that includes lodging saves you a little bit of hassle, though.

While the above paragraphs will answer most of your questions, here are a few quick facts that might be of use to you:

We hope this has been informative for you as you plan to attend either or both of these events. Tickets are currently on sale for next year’s festivities, so act quick. If you would like to learn more about attending the K-LOVE Fan Awards, click on the link below.