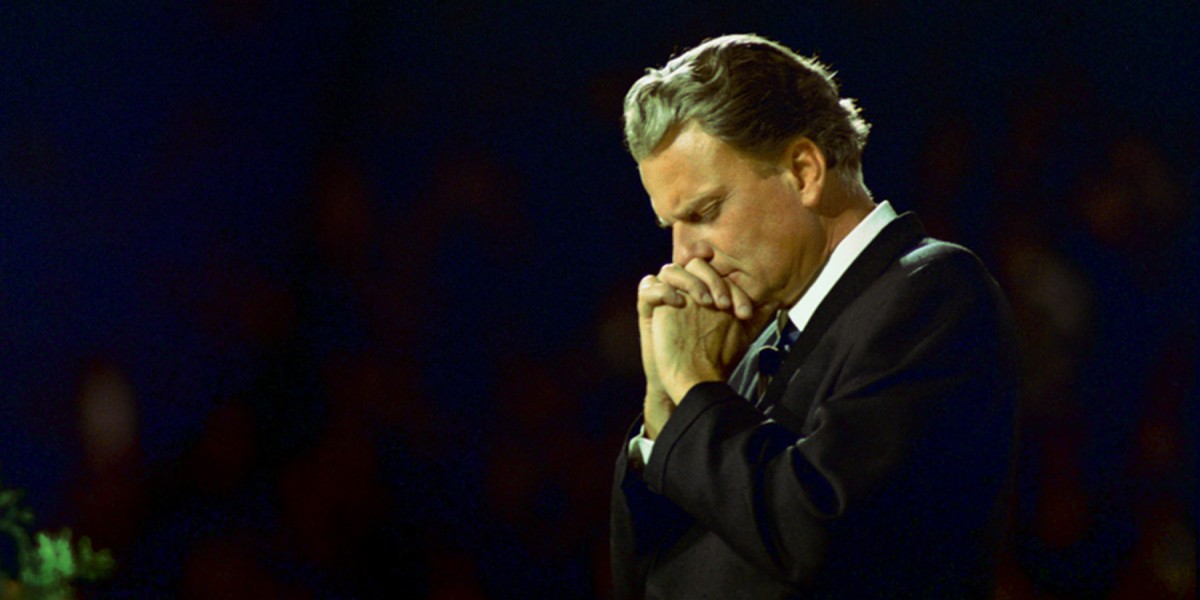 The key to Christianity is having a personal relationship with Jesus Christ. While we must never devalue that connection, another important voice in the spiritual life of each Christian is that of the local pastor. Each week these preachers pour truth into the lives of their congregants, leading them through Biblical texts and applying the words of Christ to the world we all live in. Many of these spiritual leaders will never be known outside of their communities, but there are a few names that have become iconic over the years. If we look at the famous American preachers throughout history, we will find great speakers and bestselling authors. These famous American preachers used the gifts God gave them to leave an imprint on the country and the world.

Arguably the most well-known evangelist of all time, we must start with Billy Graham. The preacher lived just shy of a full century, during which time he left an impact on American Christianity unlike any other. Graham was called by God to be a preacher in his late teens and he wasted no time in answering. By his mid-20s, Graham had been ordained, and had begun pastoring his first church. It seems that God had bigger plans for Graham, though, as he quickly became a national sensation due to his tent revivals that lasted for weeks on end. By his late-20s, Graham was holding his “crusades” around the country, bringing in thousands of people at each stop. Over the rest of his life, Graham met with U.S. presidents, queens, and a long line of other influential figures. The preacher spoke the truth of the Gospel and wasn’t afraid to speak about cultural issues like civil rights. After his death, Billy Graham was honored by having his casket presented for public viewing at the U.S. Capitol rotunda. This was a first for a religious leader.

Another evangelist who held crusades, Dwight L. Moody was one of the most famous American preachers of the 19th century. Moody received his call to serve God at an early age. He fulfilled that desire by helping immigrant communities in Chicago and sharing the Gospel with whomever would listen. As his ministry evolved, Moody found himself stepping out to lead revivals and travel as an evangelist. In his later years, the preacher felt a need for educating future generations of people on the Bible. Among his many victories on this front was the creation of what we now know as the Moody Bible Institute.

A.W. Tozer had no formal theology training when he began to pastor his first church at the age of 22. Although he was no doubt a talented pastor, we know Tozer today more through his writings than his speaking. One of the preacher’s many accomplishments was serving as an editor for Alliance Weekly, a Christian magazine, until his death in 1963. Tozer wrote dozens of books, sermons, and editorials throughout his life. His two most famous books are “The Pursuit of God” and “The Knowledge of the Holy.” In his personal life, Tozer valued the spiritual over the material. As society continued to speed up, he would fight for others to remember what is most important.

Moving into some of the more contemporary famous American preachers, Charles Stanley is  one who has served well over the last few decades. As the pastor of First Baptist Church of Atlanta for more than 45 years, Stanley developed a radio and television ministry (In Touch Ministries) that broadcasts his sermons in over 100 languages. The pastor has also been quite an author since the 1980s, having written more than 30 books. His son, Andy, has also become a well-known pastor and author in his own right.

Serving as pastor of Bethlehem Baptist Church for 33 years, John Piper has since stepped down to being the chancellor of Bethlehem College and Seminary and working with his ministry, Desiring God. Piper felt the call to ministry while attending school at Wheaton College, the same school Billy Graham attended. Piper's ministry is named after his very successful 1986 book, “Desiring God: Meditations of a Christian Hedonist." While some famous American preachers today favor a more friendly disposition, Piper has always held a boldness in his teaching that draws people around the world to his sermons and writing. His work is available online and in bookstores, but to hear him speak on current issues, you may want to listen to his “Ask Pastor John” podcast.

Some pastors are known for their sermons, other for their writings. For Martin Luther King, Jr., it’s all that and more. What separates MLK Jr. from all of the other names on our list is that he is known for what he did outside his own church’s walls, rather than inside them. King would often use scripture to nail down his points on inequality and racial discrimination. There were many people fighting for civil rights in the 1960s, but only a few had the reach of Martin Luther King, Jr. Every pastor has a certain issue (or set of issues) he feels called to. For King, the mission was to stop racial injustice and heal the country. Thanks to his high profile status and the years that have passed since his assassination in 1968, history has revealed a complicated biography of the pastor from Atlanta, but one cannot deny the importance of his work in the 1960s.

Like many preachers on our list, Rick Warren felt the call to ministry during his college years. He founded Saddleback Church in 1980 and continues to preach there today. The California-based church has experienced an amazing level of growth over the years, averaging 20,000 in weekly attendance at one point. One reason for this is the success of Warren’s 2002 book, “The Purpose Driven Life.” The book took the country by storm, selling tens of millions of copies in the first few years of its publication. Warren received much attention surrounding the 2008 presidential election after hosting a summit between future-President Barack Obama and Senator John McCain and then later speaking at President Obama’s inauguration. Warren again made national headlines following the death of his son in 2013. The tragedy gave Warren a heart for those suffering from mental illness in churches throughout America, a cause with which he has done great work. The pastor’s church continues to grow today due to its attitude of meeting people where they are and not compromising on the Gospel.

Charles Stanley wasn’t the only pastor growing a ministry of media in the 80s and 90s. Adrian Rogers, pastor of Bellevue Baptist Church in Memphis, TN for over 30 years, began Love Worth Finding in the late 1980s. The ministry, which features radio and television broadcasts of Rogers’ sermons, can be found today on 2500+ radio stations and in nearly 200 countries. Since taking over at Bellevue in the early 1970s, Rogers pastored the church into years of growth and found himself meeting with esteemed colleagues like Billy Graham and U.S. presidents. Though he passed in 2005, Rogers legacy continues to live on in Love Worth Finding and his many books (including “What Every Christian Ought to Know”).

Stepping back to one of the famous American preachers of the 18th century, Jonathan Edwards is the oldest of our distinguished entries. He was a man of the cloth who belonged to the Puritan heritage and had a great respect for revivals. He, along with John Wesley, George Whitefield and others, played an important role in the the First Great Awakening that took place in Britain and the US (although they were simply colonies at the time). We may know Edwards today mostly for “Sinners in the Hands of an Angry God,” but there was much more to the man and his ministry than fire and brimstone preaching. Jonathan Edwards was a philosophical and intellectual talent who cared for the local native tribes surrounding whichever church he was pastoring at the time. In his later years, Edwards was voted out of his position of authority in one church for being stalwart on the topic of the Lord’s Supper, proving he was a resolute man of character. Fun fact: the grandson of Edwards was Aaron Burr, who served as Vice President of the United States under Thomas Jefferson and killed Alexander Hamilton in a duel in 1804.

Finishing up our list is a trio of contemporary pastors who are leaving a legacy for the next generation. Tony Evans graduated from Dallas Theological Seminary in the 1970s, eyeing a career in evangelism that would take him around the world. God had a slightly different path in mind. Instead, Evans found himself starting a new church in his home with only ten members. Fast forward 40 years and Oak Cliff Bible Fellowship has over 10,000 members. Evans is also featured on a daily radio broadcast called The Urban Alternative that can be heard on over 1200 radio stations in 130 countries. His children have also found success in ministry, most notably his daughter Priscilla Shirer, a bestselling author and speaker.

You can’t often say this about 60-year-old men, but Louie Giglio is the youngest person on our list of famous American preachers. To be fair, Jonathan Edwards would just now be celebrating his 315th birthday. Louie Giglio’s ministry has always been about young people. While others focus on married couples or evangelism overseas (both worthy causes), Giglio’s work has always been about reaching college-aged students and partnering with them to change the world. After creating a successful ministry for students at Baylor University, Giglio felt that God was calling him to build a national conference where all kinds of students could gather and make a great impact. That idea became actualized in the late 1990s with the start of the Passion Conference. Under Giglio’s leadership, the movement went from a few thousand to tens of thousands in attendance in only a few short years. The Passion Movement has sold out sports arenas and completed outrageous acts of generosity and ministry throughout the world.

The last of our famous American preachers is Tim Keller, who founded Redeemer Presbyterian Church in New York nearly 30 years ago. Like Tony Evans’ work in Texas, Keller began the church with only a few members and has seen it grow to several thousand weekly attendees. Keller prefers not to wade into cultural issues, focusing instead on orthodoxy, the Bible, and other spiritual matters. In addition to those who have heard Keller preach on a Sunday, he reaches people around the country through his books. Tim Keller is an accomplished writer, with “The Reason for God” and “The Meaning of Marriage” being among his biggest hits. He stepped down from his role of senior pastor at Redeemer in 2017, choosing to focus on church planting and training future ministry leaders instead.

These famous American preachers are only a small sampling of the dedicated people who have served Christ honorably over the last few hundred years. Their words and actions have played a vital role in the shaping of millions of believers’ lives. As much as we value preaching that unpacks the truth of the Bible, there are even more ways to grow in your faith. For people who love to listen to Christian music, read books about faith, and watch films that share Christian stories, the K-LOVE Fan Awards is your kind of place. Each year we bring together the biggest names in Christian entertainment for a show unlike any other. Find out how you can enjoy the ultimate fan experience by clicking on the link below.