Famous Christian Athletes of 2016: Faith on the Field 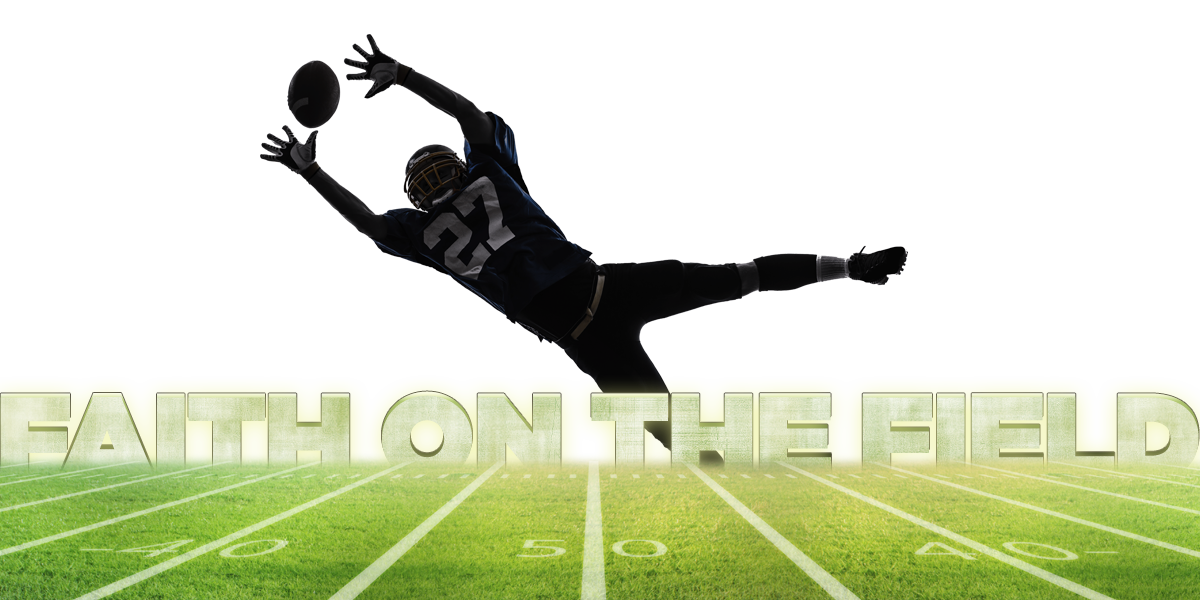 Representation in popular media is often something taken for granted in America. We can never underestimate the importance of looking to film, sports, or music and finding someone who believes what we believe in and fights for causes with which we identify. Fortunately for Christians, there is no shortage of famous Christian athletes who are successful and prominently displayed in the public eye.

To be a Christian with even an ounce of fame is to walk around each day with a target on your back. There are people looking to make mountains out of mole hills and to criticize anything you say or do. With that being said, not every Christian athlete is as eager to shout their beliefs from a rooftop. Whether they have made a public stance in the media or have led with “quiet strength” like football analyst Tony Dungy, these are just some of the athletes professing Christianity today.

The Seattle Seahawks quarterback has been successful in just about everything he’s done in life. In high school, he was a triple threat in the sports world, playing basketball and baseball as well.

Wilson attended North Carolina State for several years before he tried to make a career in baseball. Once that didn’t pan out, he spent his last year of college eligibility at the University of Wisconsin. In one year, he led the Badgers to an 11-3 record and the 2012 Rose Bowl.

Since being drafted by Seattle in the 3rd round of the 2012 draft, Wilson has fought for his place as the team’s starter and led the Seahawks to two Super Bowl appearances. The quarterback made headlines last year when he and his girlfriend, pop singer Ciara, announced at a speaking engagement that they would be saving themselves physically for marriage. The pair were recently married in England.

After playing college ball at the University of Georgia, Watson signed with the New England Patriots to play tight end. His impressive college football career and a Wonderlic test score of 48 earned him the 32nd overall pick. After several seasons and a Super Bowl ring with the Patriots, Watson has played for the Cleveland Browns, New Orleans Saints, and Baltimore Ravens. In early 2016, the tight end was named a finalist for the Walter Payton Man of the Year Award.

Aside from his work on the field, Watson has received national attention for writing his thoughts on events like the Ferguson police protests and North Carolina’s bathroom law. In 2015, he released a book on religion and race titled, “Under Our Skin.” Watson won the award for Sports Impact of the Year at the 2015 K-LOVE Fan Awards.

Jeff Fisher has been involved with the National Football League for 35 years now. As a player, he was a member of the Chicago Bears and served as a defensive back and return specialist. He finished his playing career as a member of the Super Bowl-winning 1985 Bears team that is often thought of as one of the best football teams in history.

After his playing days were ended by injury, the Bears picked up Fisher as a defensive assistant. From there, the young coach worked up the ranks with several teams before becoming the coach of the Houston Oilers mid-season in 1994. Fisher spent 16 seasons with the Oilers/Tennessee Titans, a heartbreaking loss in Super Bowl XXXIV being the pinnacle of their success. Since being let go by the Titans, Fisher has been working as the head coach of the St. Louis/Los Angeles Rams.

Another popular coach, this time in college, Mark Richt is one of the biggest winners in college football. Graduating from the University of Miami in 1982, Richt spent most of his college career playing backup QB. After college, he was offered a job at Florida State by coach Bobby Bowden in 1985. With the exception of one year at East Carolina, Richt served with Bowden until 2001 when he took on the head coaching job at the University of Georgia.

Richt had a winning percentage of .7398 at Georgia, the highest among any coach in the program’s history, but the school let him go in 2015 for never making the team a contender for the national title. He was named the head coach of his alma mater Miami Hurricanes the following month.

On top of his coaching accolades, Richt has been a vocal figure for Christianity. Serving on mission trips, adopting children, and selling his multi-million dollar home so that his family can give more to charity, the coach is making great use of the platform given to him. In 2016, he and his wife announced the start of The U Network, which will help retired athletes find work after their playing days are over. Among his many appearances are a cameo in “Facing the Giants” and presenting an award at the 2016 K-LOVE Fan Awards.

Entering the world of major league baseball at 27 years old, Dayton Moore was a scout for the Atlanta Braves. As things often go with coaching and administrative positions in sports, Moore put in good work until he found an opportunity for advancement. In 2006, he became the general manager for the Kansas City Royals. Having grown up a Royals fan from Wichita, KS, you could say it was a dream come true. Moore was basically jumping onto a sinking ship at the time and the first several years were filled with losing seasons. Trying to turn the team around, Moore and others started to rebrand the team and called for renovations to the stadium. Finally in 2013, the team clinched a winning season. They followed that up with a World Series appearance in 2014, and eventually won the championship the next year. In 2016, Dayton Moore appeared at the K-LOVE Fan Awards and was nominated for the Sports Impact of the Year award.

Watson is a professional golfer who found moderate success until he won the Travelers Championship in 2010. The left-handed golfer then went on to win the Masters in both 2012 and 2014. A professing Christian for his entire public life, Watson uses his Twitter account to share Bible verses and other inspirational messages. He tries to use his platform to be a positive voice in the sports world. You can also find Watson in a couple of Christian rap songs from Andy Mineo and KB. Today he is ranked as the 8th best golfer in the world, having peaked at number two in early 2015.

The daughter of an ordained minister and seminary professor, Allyson Felix’s faith has always been part of her life. She credits all of her success as an Olympic sprinter to the blessings God has given her as a runner. Her Olympic career started with a bang as she won a silver medal in the 200 meters at the 2004 games in Athens, Greece. She was only 18 at the time, but she set a World Junior record for her time. At this point, the runner has medaled nine times, earning two golds and a silver in the 2016 Rio de Janeiro Olympic Games. It’s a rare thing to medal in four different Olympic Games, but Felix has done that as well as having won nine times in the World Championships.

Another Olympian, Gabby Douglas is a gymnast who was a part of both the Fierce Five (2012 London) and the Final Five (2016 Rio de Janeiro) teams. Coming into stardom after her historic wins in the 2012 Olympic Games, Douglas’ story was adapted into a TV movie and her family was given a reality show. She also wrote a book about her experiences and her faith. At only 20 years old, Douglas has three gold medals and a handful of other titles. In an interview she said, "God has given me this amazing God-given talent and I'm going to go out and give Him the glory.

This now-retired basketball star got her career started playing for Pat Summitt at the University of Tennessee-Knoxville. Her first year as a Volunteer included a 39-0 record and a national championship. As a professional basketball player, Catchings played all 15 years of her career with the Indiana Fever. She finished her basketball career after helping America win the gold in the 2016 Olympic Games. At the end of her playing days, the basketball star was named as one of the 15 best WNBA players of all time. Catchings is also a WNBA champion, Finals MVP, league MVP, five-time Defensive Player of the Year, and ten-time All-Star. In short, girl’s got game. The four-time Olympic Gold medalist said of her faith, “(God is) the one that walks beside me though my ups and downs and the one that keeps me focused on where I am going. He protects me. He provides for me. He guides me and He leads me."

Continuing the theme of strong Christian women, Simone Manuel made history at the 2016 Olympic Games by becoming the first African American woman to win a gold medal in an individual swimming event. The swimmer handled her sudden media attention at the games with grace, sharing after the win, "All I can say is all glory to God. It's definitely been a long journey these last four years...and I'm just so blessed to have a gold medal." Manuel now has two gold medals with first-place finishes in the 100 meter and 4x100 meter medley races. Like many Christian athletes in this year's Olympics, Manuel uses her platform to share her beliefs through posts on social media and during her interviews.

Another member of the Final Five gymnastic team, Hernandez was also the first American-born Hispanic to make the event’s team in more than 30 years. Dubbed the “Human Emoji” by some on the Internet, Hernandez is a 16-year-old full of life and emotion. This made her more than a little popular with those watching the Olympic coverage from home. Winning a gold and silver medal at the 2016 Games, the young gymnast has a long future ahead of her. Hernandez joins her teammates Simone Biles, Gabby Douglas, and Madison Kocian in putting Bible verses and other faith messages on their Twitter accounts. These athletes are only a small representation of the many Christian athletes that display their faith through good and bad times. Christians should appreciate and support those who are taking a stand for their beliefs on the public stage.

At the K-LOVE Fan Awards, we celebrate individuals from the sports world that are making an impact for the kingdom. With the Sports Impact of the Year Awards, we have honored athletes like Adam LaRoche and Benjamin Watson. On top of honoring athletes, the weekend also features performances from some of the biggest names in Christian music. To find out how you can attend next year’s ultimate fan experience, click on the link below.