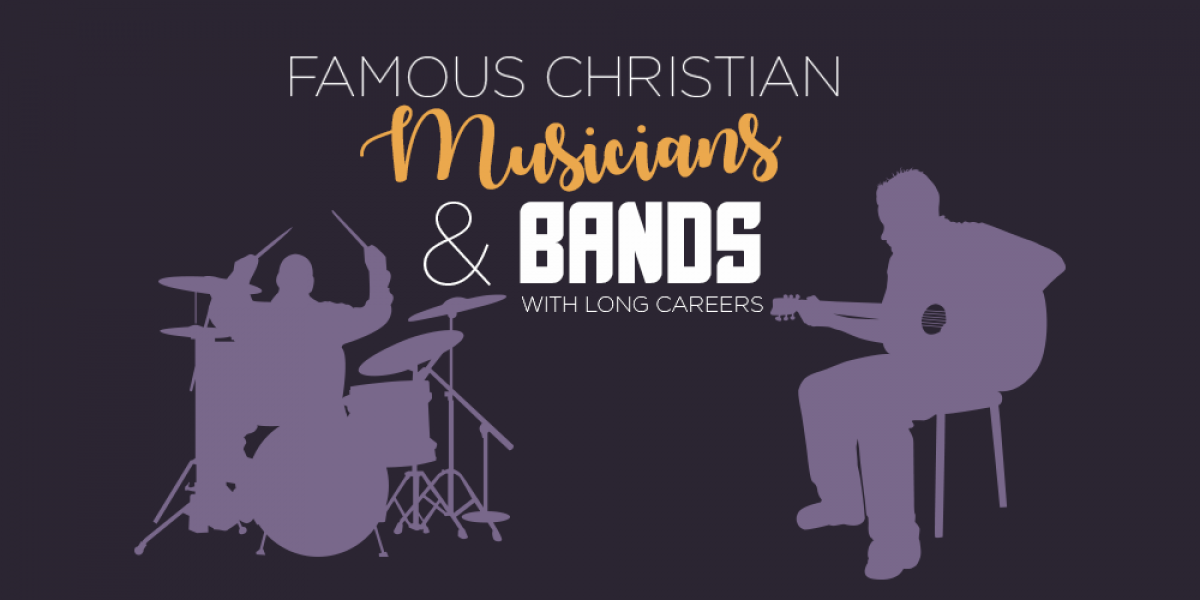 The last decade has introduced listeners to so many new artists from a variety of different backgrounds who are creating amazing content. Before we get too caught up on the emerging artists of the day, we shouldn’t forget about the famous Christian musicians and bands who have crafted impressive careers along the way. We have several bands and singers who have been in the business for well over 20 years. Considering just how young the modern Christian music industry is, that’s saying a lot. Here are some of the famous Christian musicians and bands who have made a name for themselves over the years.

With over 20 albums since 1987, Steven Curtis Chapman is one of the most prolific solo artists in the history of Christian music. In his early days, Chapman was a shaggy-haired singer/songwriter who rotated between soft-hearted ballads and tracks with country flair. His first hit album was “Real Life Conversations,” which featured future classics like “His Eyes” and “His Strength is Perfect.” In the last three decades he has released many bestselling albums and accumulated over 50 Dove Awards. Chapman is still a practicing musicians, but he spends a lot of his time these days with family, promoting activities like Sam’s Place, and writing a successful memoir.

Can you believe TobyMac’s solo career launched 17 years ago? If we combine that with another 12 years in DC Talk then we’re talking about a career that is unparalleled by most famous Christian musicians and bands. TobyMac’s first big step onto the scene was as part of the aforementioned trio that gathered four Grammys before taking an “intermission” in 2001. As a solo artist he has achieved an impressive level of fame, not to mention winning more Grammys and Dove Awards along the way. The “Steal My Show” singer has also played a part in developing new Christian talent by appearing with young singers like Hollyn and Jamie Grace in recent years.

Although plenty of the famous Christian musicians and bands on our list have made music over a long career without changing things up too drastically, Newsboys is one group that has made big changes to its roster. The band originally got its start in the mid-80s over in Australia but hit a stride in the 90s. Among the great musicians to be a part of the band over the years are Phil Joel, Peter Furler, and current frontman Michael Tait. Jeff Frankenstein, Jody Davis, and Duncan Phillips have provided the band with some stability, having been in the ranks for 20 years each. The group has been behind many hit songs like “Entertaining Angels,” “He Reigns,” and “We Believe.”

We may think that young female singers was a fad that started in the 90s with pop stars like Britney Spears, but Amy Grant is proof that the Christian genre had a two-decade headstart on that particular artist. Coming to fame in the late 70s, this young singer was the face of an emerging industry that would lead to all of the artists we love today. Grant certainly enjoyed success during a time in which there were fewer prominent acts in the genre, but her music has stood the test of time and she is still contributing today. Her biggest hit songs include “El-Shaddai” and “I Will Remember You.”

If Amy Grant was the queen of Christian music, then Michael W. Smith was certainly the king. Smith began his music career in the early 80s with groups like Higher Ground and even toured with Grant for a time. Striking out on his own, it didn’t take long for the musician to gain popularity. Michael W. Smith won both a Grammy and a Dove Award only a few years into his career and has since gone on to win 40 more of the latter. Some of the more recognizable albums from the singer’s library are “Go West Young Man,” “I'll Lead You Home,” and “Live the Life.”

Among the famous Christian musicians and bands on our list there are rock groups, pop artists and worship leaders. NewSong is essentially a combination of all those things. Formed by four friends in the early 80s, the group has pressed on for nearly 40 years. They have had a few big hits with songs like “Arise My Love” and the recent “I Am a Christian,” along with a holiday classic in “The Christmas Shoes.” Similar to Newsboys, the group has changed personnel from time to time but their continued success is a testament to the band’s loyal fans. NewSong has also invested in the genre as a whole with the creation of the Winter Jam tour that has been a staple of Christian music for 20 years.

All good things must come to an end, as this Christian rock band decided recently. Third Day was a great Southern rock group that brought something new to the table in a genre that favors more of a pop sound. The band lit up the 90s with the albums “Time,” “Conspiracy No. 5,” and a self-titled release in 1996. Third Day put out “Revival” in 2017 as a way to commemorate 25 years together as a band as well as to go out with an album that recaptured its original sound. Some of the biggest singles to come from the group were “I’ve Always Loved You,” “Revelation,” and “Cry Out to Jesus.”

Speaking of rock groups that have called it quits, Audio Adrenaline is a band that simply refuses to die. Originally fronted by Mark Stuart, this band has gone by a few other names like A-180 and never been afraid to mix things up. Audio Adrenaline started as a rap/rock group akin to DC Talk in the late 80s/early 90s before becoming a more mainstream rock band in the later 90s. The group decided to break up in the mid-00s, but has since taken on new stages of life with new lead vocalists each time. Kevin Max of DC Talk, Josh Engler of Abandon, and now Adam Agee of Stellar Kart have all sung for the group in the last five years. It may be hard to keep track of who’s who these days, but the group has delivered several hit songs throughout its existence with unforgettable tracks like “Get Down,” “Kings & Queens,” and “Big House.”

The 90s was a period for vocal groups in both the secular world as well as in the Christian music scene. Many famous Christian musicians and bands shot to fame during this period, but few female groups had the success of Point of Grace. The quartet of women had four #1 albums between 1995 and 2001 and around 20 #1 singles in the same time. Point of Grace still records music today as a trio, retaining two of the four original members. “Keep the Candle Burning,” “When Love Came Down,” and “The Great Divide” are some of Point of Grace’s biggest hits.

You don’t have to crank out crazy guitar solos or perform at huge music festivals to be among the famous Christian musicians and bands with the longest careers. Phillips, Craig & Dean is a vocal group consisting of three pastors who each wanted to step into the music business. Just like with Point of Grace, the 90s was a great time for an all-male vocal group to form and these guys had the talent to make it work. Writing and performing for over 25 years now, the group has hit the right balance of always adapting its sound to fit the time without neglecting what makes the music work. Some of the trio’s best work has been “Revelation Song” and “Great I Am,” as well as older tracks like “Crucified With Christ” and “Favorite Song of All.”

One of the most famous Christian musicians or bands, especially in the area of rock, is Switchfoot. The group recently announced that it would be going on a hiatus, but it’s the first such break in over twenty years. From the mid-90s and on, the Jon Foreman-fronted band has unleashed a number of successful albums and enjoyed a fair amount of crossover appeal with mainstream listeners. The 2003 album “The Beautiful Letdown” was an introduction to a wider audience that resulted in a double platinum record and hit songs in “Meant to Live” and “Dare You to Move.” Although the group added two new members in the 00s, it’s impressive that the original bandmates have all stuck it out these 20+ years.

When you’re talking about Christian musicians and bands with long careers, it would be a crying shame to leave off one of the earliest Christian rock bands ever put together. Formed in the early 70s, Petra has been making music off and on for nearly 50 years. While the group is mostly relegated to reunion shows these days, Petra put out more than 25 albums during the course of its run. The band was styled like many 70s rock bands in the beginning, but Petra wasn’t afraid to dabble in whatever sound was popular over the years. Some of the group’s biggest hits are “The Coloring Song” and “Grave Robber.”

There are a lot of famous Christian musicians and bands with long careers, but these artists stick out as some who have really left an impact on the music scene. Each of these groups or singers have enjoyed years of success as well as times of difficulty and their efforts should be applauded. We all have a favorite song or two from these eras of Christian music and we look forward to the future work of these acts and other new groups.

The K-LOVE Fan Awards is all about connecting fans with the artists and other entertainers who are making an impact in the Christian community. Every year we bring together the biggest names in Christian entertainment for the ultimate fan experience. Find out how you can be part of it all by clicking on the link below.