Heroes of the Faith: How to Trust in God 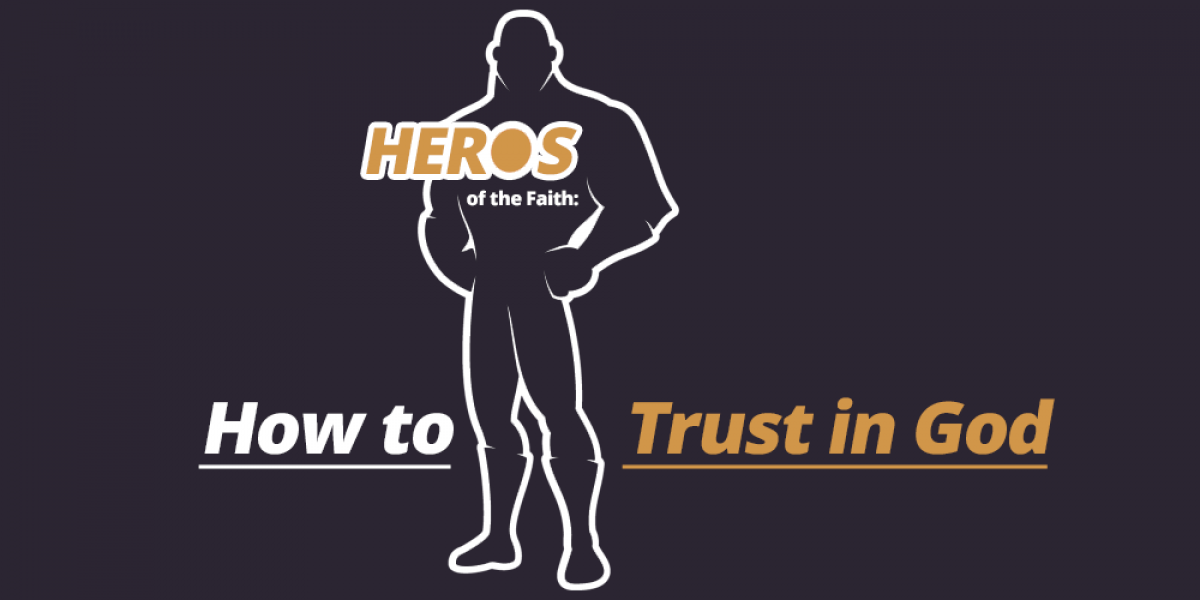 As we move through life, it can be difficult to know which of our options is the right choice and navigating life can be a mystery. For Christians, reading the Bible and praying are really our two best assets when it comes to mapping out our lives. Scripture contains truths that either directly or indirectly impact our decision making and personal philosophies. As we look at the heroes of the faith, there is a lot to learn about what it means to trust in God.

Life comes at us with events that are difficult to bear, decisions that are impossible to calculate, and so much more. It’s a comfort to know that we can examine the lives of Biblical figures and see how they handled their circumstances. While everyone is different and faces unique problems, the heroes of the faith help us understand the bigger picture in life.

Hebrews 11 is often referred to as the “Faith Chapter” or the “Faith Hall of Fame.” While there are so many lives and stories to dissect throughout scripture, this chapter gives us a snapshot of the Old Testament and the heroes of the faith who paved the way for Christianity. Let’s look at a few of the examples given in this chapter.

Abel - Heroes of the Faith

When thinking about the heroes of the faith, there’s a good chance that Abel wouldn’t be the first person to come to your mind. Why? Because there isn’t much to say about the man. His entire life is captured in Genesis 4:2-8 and even a lot of those verses deal more with his brother. However, the writer of Hebrews makes mention of Abel in Hebrews 11:4 before anyone else and instead of other Biblical heroes like Solomon, Jeremiah, Daniel, and so on. This is partly due to the author working in chronological order, but it’s still quite an accomplishment for a man with such a light footprint on the history of God’s Word to make the cut.

As readers of Genesis know, Cain and Abel were the sons of Adam and Eve. Having been born after their parents’ initial sin, the boys grew up in a world that was under the curse of the Fall. Each found a calling in vital areas, Cain in farming and Abel in attending to the animals. When each brother made an offering to God from the fruits of their labor, God received Abel’s favorably but did not do the same for Cain’s offering. While the Bible isn’t incredibly clear on why, we can assume that Abel’s offering came from a place of worship and reverence whereas Cain was simply doing it for show.

Because God didn’t seem to appreciate his gift, Cain went out and murdered his brother. The first act of homicide recorded in the Bible is one brother killing the other over jealousy.

What can we learn from Abel in this short account of his life, especially when it comes to trusting in God? The main lesson to understand is that our worship of and trust in God should come from a place of humble honesty and respect. We don’t simply seek God because it’s the right thing to do, but because He loves us and has a wonderful plan for our lives. Because He is worthy of the praise and His holiness demands it. Just because we do the right thing, it doesn’t mean that things will work out for us either, at least not in the way we expect. We doubt Abel planned for his life to be so short in spite of his obedience. For his devotion, trust, and his sacrifice, Abel earns the right to be included in the “Faith Hall of Fame.”

Speaking of heroes of the faith who are only mentioned in passing, Enoch’s entire time on earth is summed up by saying “he walked faithfully with God.” What a great way to be remembered. Enoch’s account in Hebrews 11 says “without faith it is impossible to please Him.” That means that it really doesn’t matter how many times you go to church or how many tasks you complete on some kind of checklist. At the end of the day, you must have faith to please God.

Enoch’s story is worth mentioning because there are very few people in the Bible who God decides to spare from death. Can you imagine God being so happy to have you around that He pulls you off the earth without having to feel the pain of death? That sounds like a pretty good goal to aim for.

Through this testimony, we see the importance of walking with God day in and day out. When we trust in God, we live a life that is so much better than one without Him. Chances are your story won’t end quite like Enoch’s, but your days on earth are better spent praising God and trusting in Him than anything else.

Noah - Heroes of the Faith

Now we come to the heroes of the faith whose stories are well-documented and famous to even those outside of the Christian faith. Noah’s account begins pretty similarly to that of Enoch’s. Genesis 6:9 says “Noah was a righteous man, blameless among the people of his time, and he walked faithfully with God.”

Has your boss ever given you a task that seemed impossible? A task that might risk your reputation, cause you to lose friends, and pretty much make you the joke of the office? God came to Noah and said, “I am going to bring floodwaters on the earth to destroy all life under the heavens, every creature that has the breath of life in it. Everything will perish.” (6:17)

What’s the good news for Noah? He gets to survive this apocalypse by building an inconceivably large boat and storing it with members of his family and two of every animal on earth. Can you imagine what was running through Noah’s mind after this conversation? As we all know, the boat was built, but it presumably took a long time to complete. We can only fathom how much ridicule Noah faced in that span of time. How many sleepless nights he asked God if He really meant what He said.

Maybe you have faced a similar situation in your own life. Perhaps your family members are berating you for a newfound faith in Christ or your coworkers make fun of you because you don’t want to go out partying over the new deal that just closed. Following the righteous path usually leads to some difficult times, but you have to endure.

The truth is that trusting in God is always worth it. For Noah and his family, it meant their survival in a terrible flood. The waters finally came and, because of Noah’s faith and obedience, his family had a future. Hebrews 11 commends Noah for obeying God even though he couldn’t fully comprehend the situation. What incredible task is God calling you to today? How will you respond?

The story of Abraham is really the birth a nation. After the floodwaters receded and mankind had enough time to repopulate, God called Abraham (or Abram) to set out for a new land. Let’s be clear, Abraham had a pretty good thing going right where he was. He had a wife, extended family, and a lot of possessions to his name. He wasn’t desperate like the Israelites after Egyptian slavery. It took faith for him to believe God when He said, “I will make you into a great nation.”

The journey was long and not always safe. Just like many of us, Abraham slipped up on occasion. In Egypt, he lied and nearly forced his wife into adultery (Genesis 12:10-20). Later on in life, he slept with a servant because he didn’t fully believe God when He said that He would give Abraham and Sarai a child.

Overall, though, Abraham trusted in God and did what was asked of him to protect the covenant God made with him. Abraham instilled this fear of the Lord into future generations as well. Isaac, Jacob, and Joseph all recognize this covenant that eventually brings forth the nation of Israel. Earlier, we mentioned how difficult it must have been for Noah to believe even though he had never seen a flood. It’s important to remember that God’s covenant with Abraham’s family isn’t fully completed for a number of generations. Abraham, his son, and his grandson were never able to fully see God’s promises come to fruition.

If Abraham and his family can pick up and move to a new home because God said so, what excuse do we have? When God challenges us to move, it is because He is saying “I have something better for you.” Trusting in God is about believing that He can plan your life better than you can. What are we refusing to give him control of and why are we afraid to do it?

Moses - Heroes of the Faith

Lastly, we’ll discuss one of the greatest heroes of the faith. Moses was born a slave, then rescued into the house of Pharaoh, only to be exiled as a shepherd in the wilderness. And that’s only the beginning of his story.

Living a humble life in the country, Moses is visited by God who gives him an incredible task: Go to Egypt and tell Pharaoh to release all of God’s people. Moses’ response is one of the most human moments in the entire Bible. He immediately doubts his own usefulness and begins to list all of the reasons why God’s plan can’t be right. This sounds like so many Christians’ responses when God calls them to go on a mission trip, start a Bible study, or witness to their neighbor.

Truthfully, God often asks us to do things that seem crazy at first. While it’s understandable to be taken back at first, we often resort to insufficient replies to counter God’s calling. “God, I can’t serve as a missionary in Asia. I never even went to college.” These moments of doubt are quickly dissipated when we look through Scripture and see what all God has done. If you read the Bible, you will see that God uses kings and beggars alike. No man is too good for His service and no woman is too far gone to be an instrument of righteousness.

Like Abraham before him, Moses made his mistakes. However, he lived a life of service that pleased God and resulted in the Israelites crossing over into the Promised Land. He did all of this by trusting in God and never losing sight of God’s plan.

You could say so much more about the lives of these great men and the other heroes of the faith found in God’s Word. Seeing all that God has done, what can we do but trust in Him? There is no counter-argument worth formulating. As it is written in Isaiah 55:9, “As the heavens are higher than the earth, so are my ways higher than your ways and my thoughts than your thoughts.”

What is God calling you to today? How will you respond?

While there is no substitute for prayer and reading scripture, Christians enjoy a variety of great Christian artists, authors, and films to make sense of this crazy world. The K-LOVE Fan Awards is a celebration of the biggest achievements in Christian entertainment each and every year. To find out how you and your family can attend the ultimate fan experience, click on the link below.