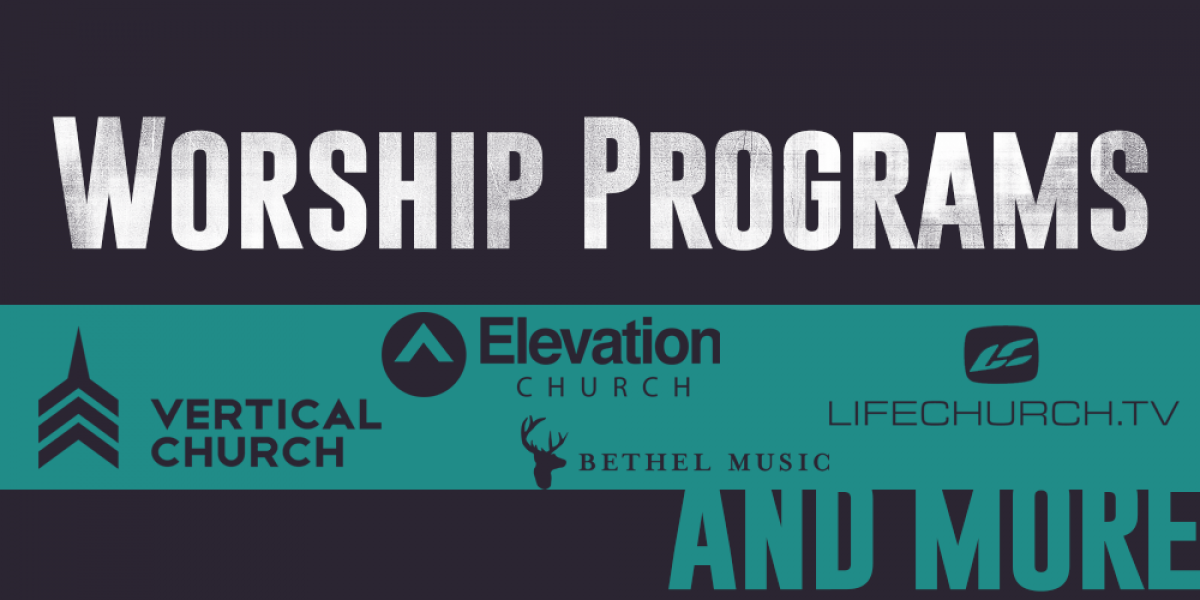 Worship has long been a cornerstone of the Christian faith. In the early days of American Christianity, the local church would bring forth a joyful noise every Sunday morning with hymns of praise. The technology has changed, as has the music, but corporate worship is still thought of as an occasion for singing. Looking at Life Church, Vertical Church, and a select few other worship programs, we can see that there is no shortage of worship music in the world today.

These church worship programs are popular not just for their musical abilities, but for how their influence permeates the Christian community. Many of these churches are not only making music, but teaching schools, making films, and catering to social activism at home and around the world.

While there are many branches to Christianity around the world, this post is more about the churches that are influencing worship music today rather than a discussion of theology. With that being said, here are the worship programs popular in America.

Similar to churches named after popular terms like “Calvary” or “fellowship,” Life Church, commonly referred to as Life.Church, has quite a bit of competition for their name.

Life Church is located in Oklahoma, but they have satellite campuses all around the country. Pastored by Craig Groeschel, the church has a total of 26 campuses stretching from New York to New Mexico.

Outside of standard church routines, Life Church is also behind the most popular Bible app for smartphones. The YouVersion Bible app has more than 50 million downloads, influencing far more than the Life Church attendance rolls. If that wasn’t enough tech power for one church, they also have a popular kids Bible app, an app for tracking weekly attendance, and one that helps churches plan out their worship services. Long story short, the people at Life.Church have seen an iPhone before.

But let’s talk about music.

The Life Church worship band has released several EPs and one full length live album titled “Fully Devoted.” Though the church has been around for a little while, the music has only been available on iTunes in recent months. Still, the band is racking up some solid tracks and provide some great resources for anyone looking to use the music in their own church.

Among those resources is a website that gives you all of the tracks and sheet music that you would need to teach the song to your local worship band. It has become a popular trend among younger churches to have an in-house praise band that records music, but it’s much rarer for those churches to make it this easy for the music to spread.

The music department at Life Church, or Life.Church, may not be the oldest or most well-known, but they are headed in the right direction.

This one’s a little misleading because, as they say on their site, “Vertical Church isn’t the name of a church.”

That may seem a bit confusing, but Vertical Church is actually a collective of praise and worship musicians who play in the Chicago area with Harvest Bible Chapel.

Harvest Bible Chapel is very much an actual church. Their goal is to build churches that have a “vertical” priority. The church is constantly expanding with newly-planted congregations popping up all the time. They also have a preschool-12th grade school as well as other educational outlets.

As far as the Vertical Church Band goes, the group has released four albums and two EPs since 2012. The most famous alumna of the band is singer Meredith Andrews, who started a solo career in the early 2000’s. She has performed with the band from time to time and can be found on their first album, “Live Worship From Vertical Church.”

The group has met critical and commercial success, as all four albums have made it into the top 10 on the US Christian chart. “Frontiers,” their latest album, was released in 2016 and features the popular worship song “Exalted Over All.”

Another area where Vertical Church and Harvest Bible Chapel are intersecting with culture is their Vertical Church Films division. Originally focusing on short films, they will soon release their first feature, “The Resurrection of Gavin Stone.” Coming to theaters in early 2017, the film stars Brett Dalton of “Marvel’s Agents of S.H.I.E.L.D.,” comedian Anjelah Johnson-Reyes, and Neil Flynn of “The Middle.”

Keeping with the “up” theme, Elevation Church is located in Charlotte, NC. Started in 2006, the church is yet another place of worship that uses satellite campuses. With over a dozen locations, Elevation Church has been helping communities all along the east coast find their church home.

Elevation Worship is comprised of musicians that are involved with the church. The group released several independent albums in Elevation Church’s early days, but it wasn’t until 2010’s “Kingdom Come” that they met a real audience.

Since then, the band has signed with Essential Records and each subsequent album has peaked high on the US Christian chart. Their most recent album, “Here As in Heaven,” was released in February 2016. It reached #15 on the US Albums chart and featured the popular worship anthem “O Come to the Altar.”

To read more about Elevation Worship, check out this article we wrote about the most popular Christian bands of 2016.

It should be to no one’s surprise that so many of these popular Christian groups come from church worship teams. Even relatively small churches are putting out worship albums these days. When you get a good group of musicians together who want to authentically worship God, there’s bound to be some powerful songs to come out of it.

Bethel Church has been somewhat of a pioneer for homegrown American worship bands. Since 2001, they have encouraged their worship team to create and inspire with their music. In more recent years, the Bethel name has extended to include a recording and publishing entity as their music has continued beyond that of Bethel Church’s worship team.

Today, Bethel Music consists of the actual worship team and other artists that have formed a collective. These artists include Leeland and Jonathan and Melissa Helser. The latter’s new album, “Beautiful Surrender,” just hit #54 on the US Albums chart. Bethel Music’s Amanda Cook also released a solo album in September 2015 titled “Brave New World,” which won Inspirational Album of the Year at the 47th Dove Awards.

Despite their inclusion of new artists, it would be a mistake to think that the original worship team was taking a backseat. The band’s 2015 album “We Will Not Be Shaken” featured the strong anthem “No Longer Slaves” among other popular songs. That track won a Dove Award for Worship Song of the Year.

With their label putting out solid albums and the worship band steadily creating new music, Bethel Music seems poised to continue excelling in the praise and worship genre.

While there are several other worship teams hard at work around the country, we wanted to share a collection of some of the most popular groups and church worship programs. An incomplete list, we hope this provides a snapshot of what God is doing through music in America. These anthems are inspiring believers and bringing glory to God.

If you are a fan of worship music or CCM, we invite you to take part in the ultimate fan experience at the next K-LOVE Fan Awards. To find out how you can see all of your favorite Christian artists in one weekend, click on the link below.