Music Award Shows: What Do They All Mean? 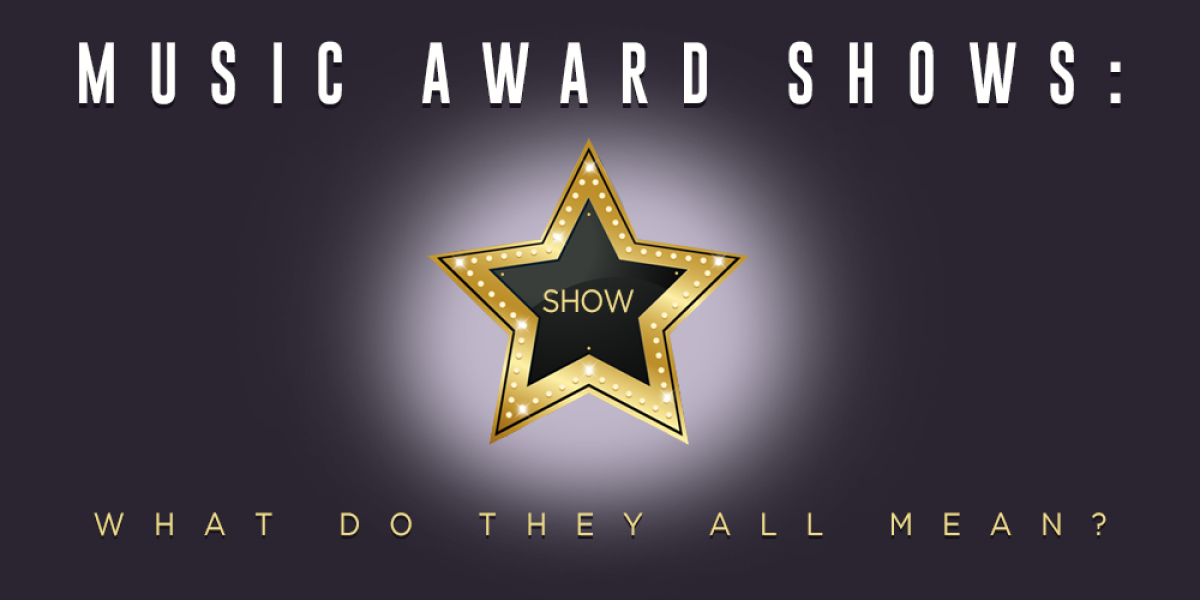 It seems like every other day we’ll see an advertisement on TV about the next big awards show coming up that you just can’t miss. How can they all be so unforgettably awesome? The truth is that different music award shows serve different purposes. For each big show there is a certain demographic they are shooting for with the audience and a particular style of music they want to focus on through performances and award categories. This can even change year to year depending on who is running the show or what the previous year’s ratings looked like. Look at the MTV Movie Awards in 2017: the show changed focus to film AND TV, added a genderless acting category, and made a few other changes. Here are a few of the popular music award shows out there and what they really mean.

Considered the gold standard for the music industry, this award is handed out by The Recording Academy (formerly the National Academy of Recording Arts and Sciences). This prestigious group has been a staple of the music industry for over 50 years. These awards are some of the most diverse and all-inclusive of any institution. That may seem surprising to anyone who has only watched the televised show, but there are dozens of awards given out that do not make the broadcast. With special categories designated for jazz, Latin, Christian, country, and other styles of music, you will find a large number of musicians from different backgrounds taking home a prize. This honor is voted on by members of The Recording Academy. Unlike some other music award shows on this list, the Grammys are more of an industry award rather than being fan-voted.

Billboard has been a name in the entertainment industry for over 100 years. It’s only in the last few decades, though, that the name has been synonymous with music charts. Tracking airplay, album sales, and more, Billboard is a great tool for those looking to stay in the know in entertainment. The awards show itself has been around in some capacity for around 25 years. Voting and nominations are somewhat left up to the fans, but not in the traditional way you might think. Billboard chooses the nominees based on everything from album sales to social engagement. There are also a few special fan-voted categories that come and go through the years. Using this metric, the Billboard Music Awards are sure to please fans of today’s top artists.

This awards show is one of two on this list that casts an extremely wide net in order to include just about every segment of pop culture that exists. There are dozens of awards that range from TV, film, music, social media stars, viral videos, and more. Around for over 40 years, the People’s Choice Awards have long been seen as the awards show for everyday fans. In the digital era, every vote is cast online by anyone who wants his or her voice heard. One big recent change is that the show will be leaving its home at CBS in 2018 and moving to E!.

As one of the most vibrant genres in music today, country music has several big music award shows over the course of the year. There’s the Academy of Country Music Awards, the Country Music Television Awards, and others. The show that is often considered the biggest event is the CMA’s. Celebrating its 50th year, the show brings together the most popular artists in the genre for a night of great performances. There are usually about a dozen awards handed out, all of which are voted on by the members of the Country Music Association.

Put on by the Gospel Music Association, this has often been referred to as the “Christian Grammys.” Covering the biggest achievements in gospel and contemporary Christian music, the Dove Awards has been around since the late 60’s. The number of awards at this event are always changing, but there are usually around 40 categories. The winners are voted on by members of the Gospel Music Association which mainly consists of industry people, however, fans can purchase membership for a reasonable price. The show itself is a dressy affair not unlike the Grammys or some of the other popular music award shows.

Think of it as “the People’s Choice Awards, but younger.” The Teen Choice Awards cover the usual suspects in movies, TV, and music, but it also has awards for fashion, social media personalities, politics, cultural trends, and sports. In a nutshell, it’s quite possible that there are more trophies than people in the room. The Teen Choice Awards started in 1999 and, as you might have guessed, favor a younger crowd whom they count on to decide the winners of each category.

Created by Dick Clark in the 1970’s, this event is another one of the music award shows that lets the fans decide who wins. Unlike some of the other fan-voted events on this list, though, the American Music Awards keeps the accolades strictly to music categories. One interesting thing about the awards is that most of the categories only have three nominees. While it would be nice to have a few other choices, this probably keeps one artist from winning with only 30% of the total votes. As fun as the American Music Awards are, they struggle for an identity in what is a crowded field of music award shows. That’s maybe why 2016’s event was the worst ratings night in the show’s history.

Just a year older than the iHeartRadio Music Awards, the K-LOVE Fan Awards is the only major Christian music awards show that lets the fans have the final say. More than just a one-night event, the K-LOVE Fan Awards brings together the most popular Christian artists with their biggest fans for a few days of fun, faith-filled music. On the big night, several music awards are given away as well as honors for films, athletes, and authors who have made an impact.

We hope you have a better understanding of what all these music award shows mean so the next time you see an ad on TV, you’ll know exactly what kind of show to expect. For information on how you and your family can attend the K-LOVE Fan Awards, click on the link below. You won’t want to miss out on your chance to be a part of the ultimate fan experience.