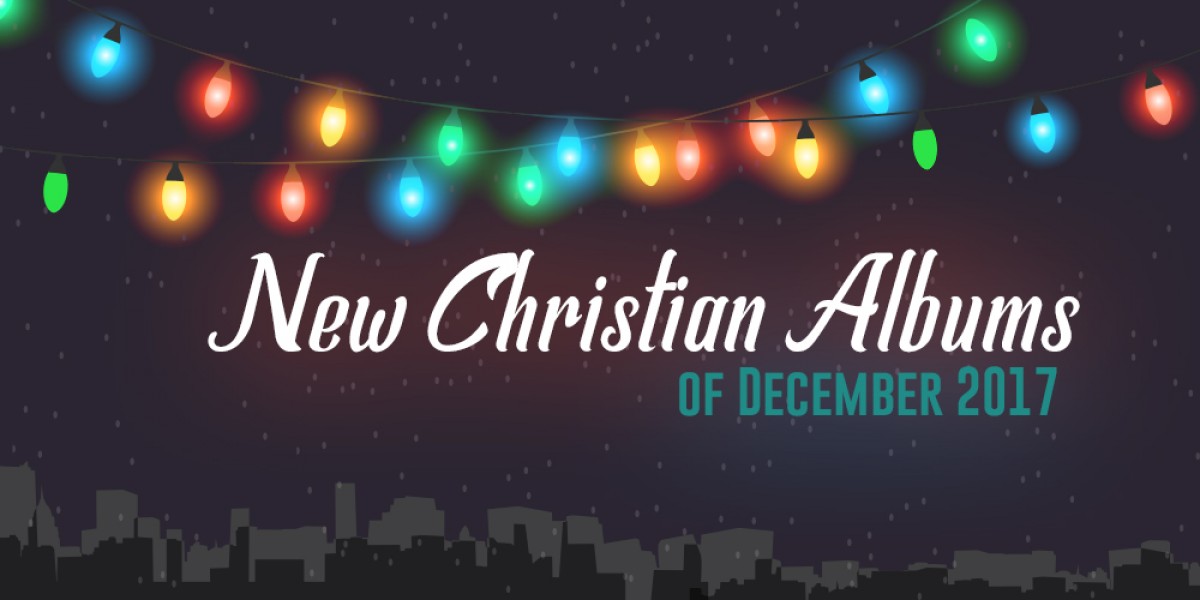 As we finish out 2017, there are a few new Christian albums that squeaked out at the end of the year. This time of year isn’t the busiest when it comes to new music releasing, but December brought with it a few late Christmas releases, some worship records, and other new Christian albums. It may not be quite time for you to take down the decorations and start a new chapter in 2018. For those who are having a little trouble letting go of the holiday season, we have some new Christian albums that will help you say goodbye to the most wonderful time of the year. Later in this post we’ll also highlight a few great singles from acts both great and small. Check it out!

The first of two Christmas collections on this list, “Christmas, Vol. 1” is a short EP from the people over at Planetshakers. Although the Australian worship movement often uses live recordings for the same reasons as outfits like Hillsong and Passion, this Christmas record is a studio effort that fans can still enjoy. What “Christmas, Vol. 1” lacks in live atmosphere it makes up for by throwing as much as it can musically into each Christmas cover. Many holiday albums are simple rehashings of songs we all know and love, but Planetshakers has four songs here that sound perfectly true to their standards in musicianship and message. Each song throws together a number of vocal parts with music that ranges from worship to pop to funk and beyond. Christmas purists who don’t care for too much of shaking things up can also enjoy a more acoustic sounding “Silent Night” that has wonderful vocals and a peaceful tone.

Christmas Day may be behind us, but for those of us who have to put off holiday plans for a few days or weeks, there’s still plenty of time to be merry. When you look at the track list for “Heaven Has Come,” you may think it’s a simple album full of cookie cutter holiday songs, but that would be a mistake. Like the Planetshakers EP listed above and some other Christmas albums from 2017, “Heaven Has Come” is a distinct holiday album that isn’t scared to put a twist on classic songs and make something special. The time-honored Christmas songs still retain their true meaning but Saddleback Worship’s versions offer some much needed flavoring. “Heaven’s Come (Joy to the World)” is a rock/pop worship track that sounds like it came from Hillsong Young & Free. Don’t worry, though, because “Silent Night” still shines in a fairly conservative take on the song. (Apparently musicians love this song as much as the rest of us.)

Maybe you’re looking for something entirely different this time of year and you’re all Christmas-ed out (Most of us, probably.). Luckily one of this month’s new Christian albums is pretty much the opposite of “festive.” The Lowly Heirs is a new band releasing its first record with this self-titled EP. Each track feels like the chapter to a book that is singular in vision. The six songs, which average over seven minutes in length, are beautiful folk/worship songs that instill peace in a time of year that is often hard for many. Whether you’re recovering from the holidays or just needing some new music to bring you hope, you’d do well to give The Lowly Heirs a listen. We suggest starting with “Sanctify” or “Informal Exchange.”

When you see this album online or in stores, your first question might be “Who is Cole & Sav, yet another worship team from Bethel Music?” Not quite. That name is actually part of the branding for celebrity couple Cole and Savannah LaBrant. The two both gained fame on social media through Twitter and Vine in recent years. The term “social media star” might be a little too fresh for all of us, but this couple has been a role model during their dating relationship and marriage as they have constantly pointed their fans toward the healing power of faith. “Jesus Jams” is a compilation of worship songs picked out by Cole and Savannah that have made an impact in their relationship and their respective journeys to faith. Among the songs to make the cut are “Only King Forever” from Elevation Worship, Rend Collective’s “My Lighthouse,” and “The Lion and the Lamb” by Big Daddy Weave.

Like we said, there aren’t that many new Christian albums in December. Nobody wants something they’ve worked so hard on to get lost in the noise of “Rudolph the Red-Nosed Reindeer” and office Christmas parties. While we didn’t want you to forget about the releases above, there were also a few great solo tracks that were put out this month.

As he prepares to move on from “The River” and his very successful debut album, singer Jordan Feliz has teased fans with some promising new singles in recent months. Following closely behind the warm reception to “Witness,” Jordan Feliz’s “Faith” is a strong track of hope and encouragement that we’re sure listeners will love. While Christian audiences are familiar with Feliz, they might be getting their first look at Austin French with “Freedom Hymn.” The singer has been working for years as a worship pastor and even performed well on the ABC show “Rising Star” in 2014. “Freedom Hymn” is an inspiring song that reminds us of acts like Danny Gokey, so we’re excited to see what the future holds for the singer. Closing things out for the list of new Christian albums and singles is Hawk Nelson’s “He Still Does (Miracles).” The pop/rock jam is an upbeat track that reminds us of the Lord’s consistency as well as the fact that Hawk Nelson is still putting out quality content over a dozen years into its existence.

December may be a slow month with short days, but that doesn’t mean there aren’t new Christian albums for listeners to get their hands on. At the K-LOVE Fan Awards we’re all about connecting fans with the music that moves them. Find out how your family can enjoy the ultimate fan experience by clicking on the link below.