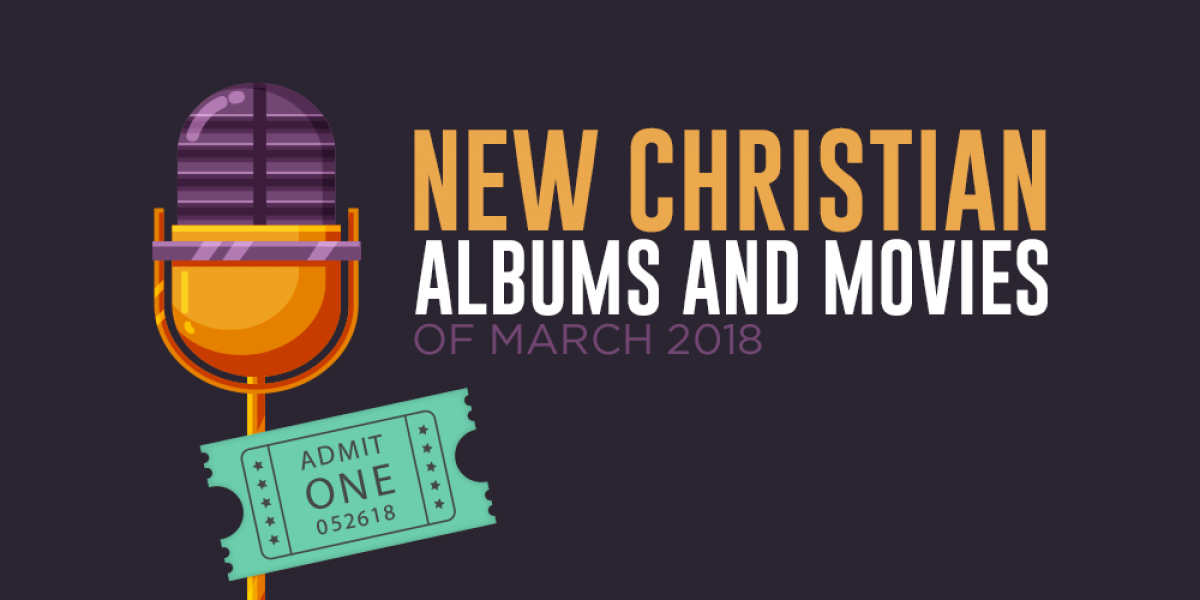 The new season of spring has brought with it several exciting new Christian albums as well as a trio of newly released films that tell unique stories of faith. Whether you are celebrating the Easter holiday or simply wanting some new Christian albums to listen to on your next road trip, we have plenty of God-honoring songs to keep your whole family entertained. Here are some of the new Christian albums of March 2018.

The world got a taste of Jordan Feliz’s musical stylings in 2016 with the release of his first big album, “The River.” That album’s title track, along with “Never Too Far Gone” and “Beloved,” solidified the singer’s position as one of the hot new acts to follow in Christian music. Feliz debuted a pair of new singles in late 2017 (“Witness” and “Faith”) that got fans excited for a new album. “Future” follows the path laid out by those tracks in creating a pop/rock album that is very contemporary. If listeners prefer something a little slower, however, “180” is the perfect song for them to add to their library.

In recent years we have seen so many great worship leaders enter the national spotlight of Christian music. One man who has been at it for a while is Travis Cottrell. Much of the singer’s popularity has come from his partnership with renowned speakers like Beth Moore, but his skills as a worship leader are top notch. “The Reason” is his latest album to show off Cottrell’s musicianship, this time with songs like “No Other Fount,” “Do the Impossible,” and the album’s title track. “The Reason” is a wonderful mix of worship favorites and original music that will inspire reflection and praise no matter where you are.

I AM THEY is a relative newcomer to the Christian music scene, but they are quickly becoming a group that you need to know. “Trial & Triumph” is the band’s sophomore album, following a debut that garnered a New Artist of the Year nomination at the Dove Awards. Sort of a Nashville take on Rend Collective, I AM THEY is a blend of folk, country, and worship music that will get your head nodding and your toe tapping. Some of the tracks we recommend from “Trial & Triumph” are “Scars,” “My Feet Are on the Rock,” and “The Water (Meant for Me).”

“I Can Only Imagine” - MercyMe

If the title of this album sounds a little familiar, that may be due to the fact that MercyMe released a megahit song by the same name nearly 20 years ago. With this month’s “I Can Only Imagine” film coming out (more on that later), this album serves as a greatest hits collection of the band’s work up to this point. One noticeable omission from the album is MercyMe’s most recent hit, “Even If,” but that may work as as advantage for those who have heard the song a little too much lately. MercyMe has done some incredible work in the Christian music scene over the years, so it will be nice for listeners to have songs like “Greater,” “Word of God Speak,” and “Homesick” together on an album that features multiple versions of the popular “I Can Only Imagine” track.

Speaking of great song collections, the guys over at Anthem Lights have put together one of the best new Christian albums for those who love classic hymns. This group has created mashups, performed inspiring covers, and more during its time in the recording studio. Volume One of the group’s hymn series was released in 2017 and now it’s back with some favorites which everyone can enjoy. Among the collection for “Hymns, Vol. 2” are “Holy, Holy, Holy” and “How Great Thou Art.” As for medleys, there are several. We personally recommend the “Invitation Medley” which consists of “Turn Your Eyes Upon Jesus,” “I Surrender All,” and “I Have Decided to Follow Jesus.”

Although Christian films are fairly common these days, it’s unusual to have three released within the span of three weeks. This Easter season Christian audiences have several choices when it comes to finding something appropriate for the whole family. Let’s look at what these films have to offer.

As we mentioned before, this film is related to the MercyMe song of the same name. Long before “I Can Only Imagine” became a world famous song, it was a personal story of singer Bart Millard. The film chronicles his struggles as a musician as well as his personal issues with his father which inspired the writing of the song. At the time of this post, “I Can Only Imagine” has made nearly $40 million, making it one of the highest grossing Christian films of all time. We’ll see how things go through the rest of its run, but so far the film is proving that there is a market for Christian films.

Following the week after “I Can Only Imagine,” this Jim Caviezel film is about a certain Biblical character whom you can probably guess from the title. One little surprise is that Caviezel (who played Jesus in the Mel Gibson film “The Passion of the Christ”) is actually playing Luke instead of the title role. The plot of the film follows the written account of Acts and the conversion of Paul. Much of the film focuses on the persecution of the early church and the role that Paul played in building disciples. The more graphic images of torture make it a film that leans toward adults, however the story is one that certainly deserved to be onscreen.

Rounding out the three Christian films premiering in March 2018 is “God’s Not Dead: A Light in Darkness.” The film is the third entry in the “God’s Not Dead” franchise. This time the story revolves around a pastor whose church church is burnt down. The previous installments in this series have tackled different stories of religious persecution, especially in the classroom. So far it has been a profitable franchise with the first film grossing around $65 million and “God’s Not Dead 2” making approximately $25 million. No matter which of these Christian films you see (hopefully you can make it to all), we are happy that audiences have so many options for Godly content around the Easter holiday.

As you spend time with your family, take care of chores around the house, and go out with your spouse, we hope you enjoy these new Christian albums and films or some of your other favorite Christian entertainment.

Of course, the best way to enjoy the biggest names in music, film, and more is to attend the K-LOVE Fan Awards. Featuring the hottest performances and one-of-a-kind access, it is the ultimate fan experience. Find out how you can be part of it all by clicking on the link below.