New Christian Albums, Singles, and Movies for May 2017 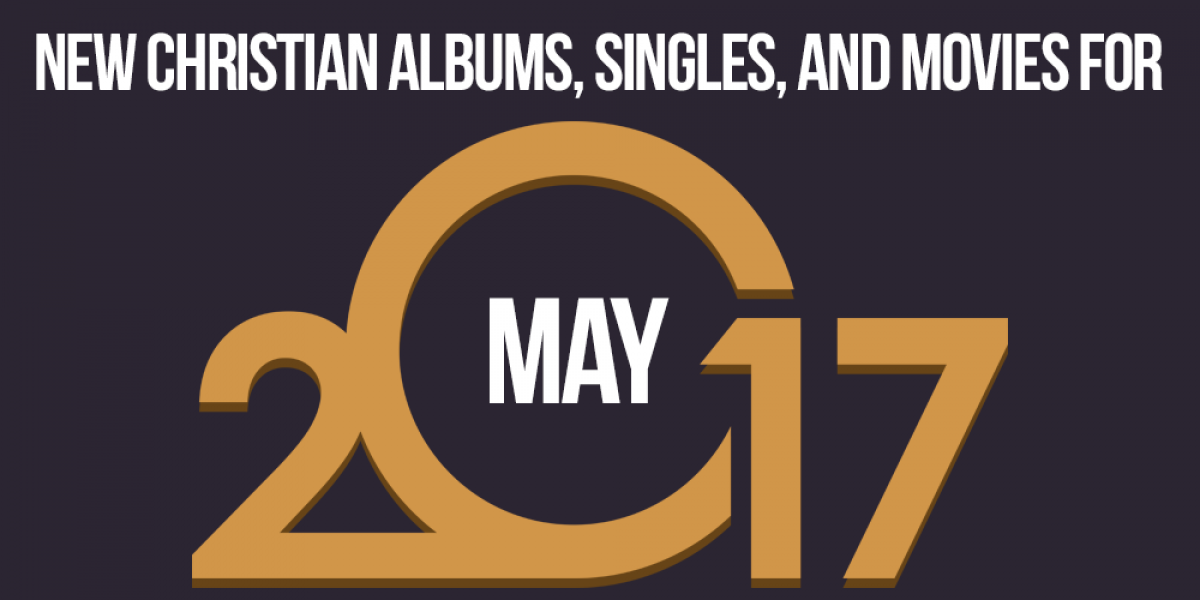 Fresh off the K-LOVE Fan Awards, we’re excited to find new Christian music that will inspire you and your family and bring the hope of Jesus to millions. The month of May delivered many new albums with a variety of musical flavorings. There were worship albums, pop anthems, and even some really great country and bluegrass. Without further ado, let’s get into some of the new Christian albums, movies, and singles of May 2017.

Mandisa - “Out of the Dark”

After four years of listening to “Overcomer” on repeat, we are happy to report that there is new music from Mandisa. “Out of the Dark” is an album that is both on-message for the singer and self aware of how long the singer’s fans have been waiting for new material. The album features appearances by Jeremy Camp, Kirk Franklin, TobyMac, and Britt Nicole, so there’s plenty of talent packed into each song. With tracks titled “I’m Still Here,” “Out of the Dark,” “Comeback Kid,” “Keep Getting Up,” and “Back to Life,” Mandisa is ready to get back to the grind. That means more new Christian albums for her fans and more songs of encouragement on the way.

The days of mixtapes may be long behind us, but don’t tell Rend Collective. Their latest release is something of a greatest hits compilation. Featuring some of the band’s best music from albums like “The Art of Celebration” and “Homemade Worship By Handmade People,” the album is a gift to fans who have wanted a special album containing the best songs. If you’ve never listened to the band before, this might be the perfect way to make its acquaintance. Some of the top tracks include “Build Your Kingdom Here,” “My Lighthouse,” and “More Than Conquerors.”

No list of the month’s new Christian albums would be complete without a worship entry. We’re pleased to have the full-length debut of Iron Bell Music in this month’s update. Some of the best ministries, Bible studies, and worship events are born out of humble beginnings. Iron Bell Music started as a series of worship nights to provide hope and an outlet for worship for a small gathering and became more. The album, recorded live on one of these nights, is full of raw emotion and has a spiritual atmosphere that translates over through the recording. If you’re a fan of Vertical Church, Elevation Worship, and the like, this might be the next album for you.

It’s not every day you come across a pop band that is comprised of six females. Throw in the fact that they are all sisters and it gets even rarer. Cimorelli got its start doing covers on YouTube but quickly became popular with the younger crowd. The group isn’t strictly a Christian band, though “Alive” is very much a faith-filled album. If you’ve ever listened to Britt Nicole and wished she had five sisters to fill in the harmonies, give this album a listen. A few of the top songs are “Your Name is Forever” and “Alive.” Here’s the video for the title track.

Josh Baldwin - “The War is Over”

A product of Bethel Music, Josh Baldwin’s third album is something of a singer/songwriter worship album that feels personal and intimate. “The War is Over” is full of songs that are slow and feel profound. The title track is certainly one to listen to, but “Abraham,” “Get Your Hopes Up,” and “Endlessly” are worth checking out as well.

Just as you might have surmised from the name, Southern Raised has the country flair your list of new Christian albums needs. Following the band’s debut 2014 album, “Another World” blends the worlds of country and bluegrass with the truth of the gospel. The album is a reminder of a bygone era when this kind of music was considered the mainstream Christian sound. If you’re looking for a break from bands that rest too much on mixing with computers and wearing the right kind of cool clothes, maybe it’s time to go back to the sound of banjos and mandolins.

Todd Agnew - “From Grace to Glory”

Releasing his first album in five years, worship leader Todd Agnew brings his signature vocals back for “From Grace to Glory: The Music of Todd Agnew.” The album has some of the artist’s biggest hits from the last 10-15 years. Among those hits are “My Jesus,” “Grace Like Rain,” and “Our Great God,” the last of which features Rebecca St. James. “From Grace to Glory” should be seen as more of a mile marker than a reflective greatest hits package, though. It tells the story of Todd Agnew and serves as a launching point for where he wants to go from here. Fans of the worship leader should be happy to see such a collection.

May saw the end of season 12 of “The Voice” and as the finale grew closer there were two great Christian songs covered. Chris Blue, the eventual champion, covered Tamela King’s “Take Me to the King” in amazing fashion. Another great performance was rendered by finalist Aliyah Moulden when she performed a version of MercyMe’s “I Can Only Imagine.” Back in the Christian music industry, Brandon Heath released his latest single, “Whole Heart.” The song is an upbeat jam similar to something you might hear from Phil Wickham or Mat Kearney. Matthew West also had a new single with “Broken Things.” The sound is a little different from some of his biggest hits, but the positivity of songs like “Mended” and “Grace Wins” is definitely there.

There were also a couple of Christian films that hit the DVD market in May. “The Resurrection of Gavin Stone” is the story of an actor who has to complete community service at a church and winds up getting involved in their annual play. “Remember the Goal” is a sports film about a girls cross country team that deals with the arrival of a new coach with big aspirations.

Between new Christian albums and these films hitting DVD, it looks like there’s a lot of new Christian entertainment for you and your family. At the K-LOVE Fan Awards, we know how important finding good family entertainment can be. That’s why we celebrate the artists who have made the biggest achievements each and every year. Find out how you can attend the next K-LOVE Fan Awards by clicking below.