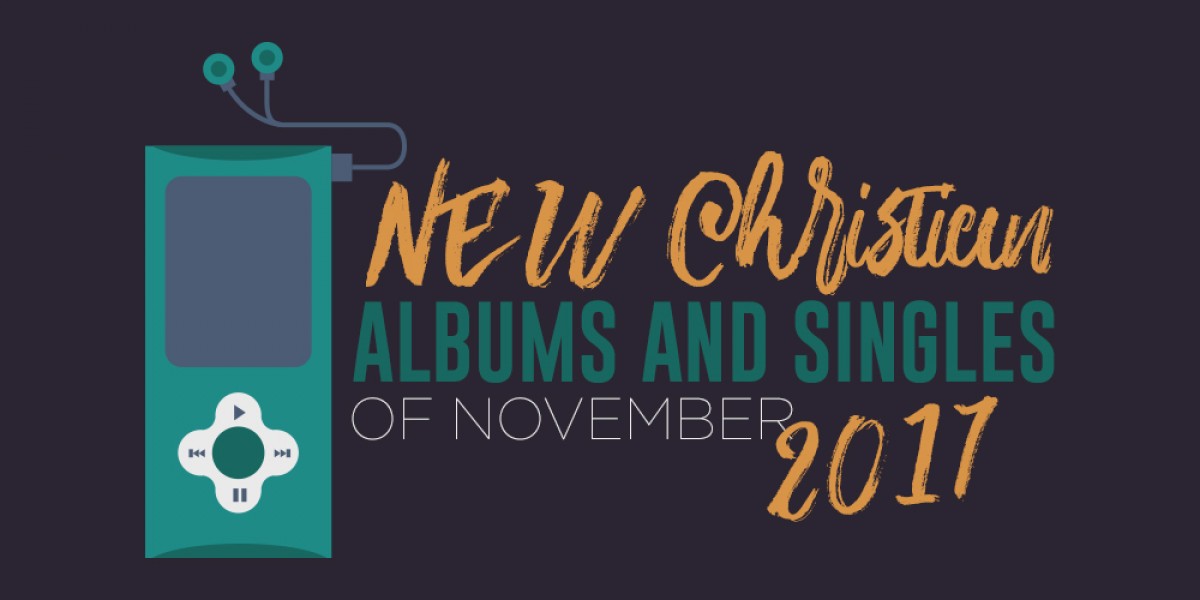 The end of November is a time of busy transitions and a flurry of commitments at church or with family. We’re all getting sick of turkey leftovers and rushing to change out the fall decorations for twinkling lights, nativities, and jolly round men in red outfits. Don’t get too lost in the season shift, though, because there is plenty of new Christian albums to enjoy. As you race around town and brace for the most wonderful time of the year, feel free to let these new tunes get you through the day. Here are the new Christian albums for November 2017.

This has been a welcome year for fans of one of Christian music’s biggest female rock voices. With a few new singles and now a new EP, Plumb has delivered her first recordings since 2015’s “Exhale.” After releasing the single “God Help Me” over the summer, the singer put together a few more original tracks to create an EP that showcases everything listeners enjoy about her music. With themes ranging from isolation and fear to the Lord being the answer to our worries, the album is a comforting and therapeutic look at how we can face the world today.

Jeremy Riddle had a hit Christian song on his hands in 2007 with the release of “Sweetly Broken.” Although the Christian singer has had success as a solo artist, he’s spent most of his time serving as a worship pastor. In recent years he has been a part of Bethel Music, taking part in several of the worship collective’s albums. “More” is a return to Riddle’s solo career and his first album since 2011. The album is more of a singer/songwriter journey than a worship album, but it has a sincere heart that creates a similar atmosphere.

This young singer made her presence known in the Christian community with the release of “Now,” one of the summer’s hottest new songs. Earlier this month Hope followed up that song’s success with a 7-song, self-titled recording. The singer started out in country music, something which is quite evident when listening to songs like “Looking Back at Me.” Christian and country music have intertwined over the years with many artists like Alan Jackson, Randy Travis, and more recently Hillary Scott. Like some of the names listed, Hope also takes kindly to old hymns as the album closes with acapella covers of “Amazing Grace” and “It Is Well with My Soul.”

Francesca Battistelli has been one of the top Christian singers for years now. With four solid albums (including a well-liked Christmas album), the artist has put together a string of hits that fans love. Though she’s taken a little time off for family since 2014’s “If We’re Honest,” this greatest hits collection lets fans hear two new studio recordings that should hold them over until the singer comes back with a full album of new music.

Early fans of Kutless may think of the band as strictly a Christian rock group, but the musicians have proved over the years that they also want to make powerful worship music. Blending the act’s rock roots with worship ballads that showcase the band’s faith, “Alpha/Omega” is pure Kutless. The album features covers of today’s biggest worship anthems like “Great Are You Lord” as well as new recordings of the band’s own material. Kutless fans who are in need of a rock/worship album should check it out.

Before releasing this self-titled solo album, Matt Hammitt spent two decades as the voice of Sanctus Real. Stepping out into a new chapter of his music career, Hammitt is kicking things off with a few familiar songs as well as some original content. Sanctus Real fans will recognize the hit song “Lead Me,” although the recording here is a new take on the song. The album’s original content is a mix of pop and rock that reminds us of an upbeat John Mark McMillan. Some highlights include “Could’ve Been,” "He Always Wins," and “I Saw the Light.”

It may seem like the deluxe edition of an older album isn’t as exciting as something entirely new, but Skillet has put together quite the package in “Unleashed Beyond.” The special edition of the band’s 2016 album, this recording offers a lot more than you might think. On top of the original 12 songs, fans will find eight new tracks. Three of these are remixes of songs like “Feel Invincible” and “Stars,” but you’ll also see five original songs that make for a nice little bonus.

“Abide With Me” - Sara Groves

Sara Groves is an accomplished Christian singer, having released more than a dozen albums in her 20 years as a musician. With a soft voice that is melodious and peaceful, we’re pretty sure she could sing the phonebook and we’d be happy to listen. Her latest album, “Abide With Me,” is a collection of old Christian songs and hymns that are favorites among most believers. Some highlights of the album are “Praise to the Lord,” “For the Beauty of the Earth,” and “He’s Always Been Faithful.”

Since it’s almost time for Christmas, we wanted to make sure to mention one of the new Christian albums suited for the holiday. Christian Christmas albums may feel like they come a dime a dozen, but a few really stand out for doing something different. With Tenth Avenue North’s album, we see a run of musical stylings that highlights the best parts of the 20th century. It all starts with a retro radio rendition of “Old King Wenceslas” and a twist on “O Come All Ye Faithful” that has a dancing big band vibe. Each song on the album takes us further through the century until we get to “Mistletoe (the Christmas Sweater Song),” a track that sounds like Weezer in the late 90’s. The album is definitely one to check out if you’re looking for a Christmas album that mixes things up a bit.

Newsong is a Christian band that’s been through it all over the last 35+ years. This month the group blessed its fans with a great new song called “I Am A Christian.” The catchy tune was popular during the most recent Winter Jam tour so it’ll be sure to see a long life with listeners. Like Newsong, Steven Curtis Chapman is an artist who has had a long career in the music business. This year marks the 25th anniversary of his hit song “The Great Adventure.” To mark the occasion he recorded a new version of the song with Bart Millard of MercyMe and the result is wonderfully nostalgic. Another new single is “Made For This” by Carrollton. It’s a toe-tapping, body-swaying rock song that has actually been picked up by NBC for some of its Winter Olympics coverage. Like with the new Christian albums, we’ll end this list of singles with a Christmas entry. Sarah Reeves lends her soothing voice to a classic carol with “Angels We Have Heard On High.” You can also hear Reeves on the Tenth Avenue North record discussed earlier, as she appears on the album’s last track, “God Rest Ye Merry Gentlemen.”

That does it for another great month in Christian music. If you’re looking for new music to guide you through the hectic days of shopping at malls and driving to Christmas programs, we suggest a few of these new Christian albums to ease your travels.

At the K-LOVE Fan Awards, we love connecting fans with the artists who inspire them each and every day. We bring together the biggest names in Christian entertainment for the hottest event of the year. Find out how you and your family can be a part of the magic by clicking on the link below.