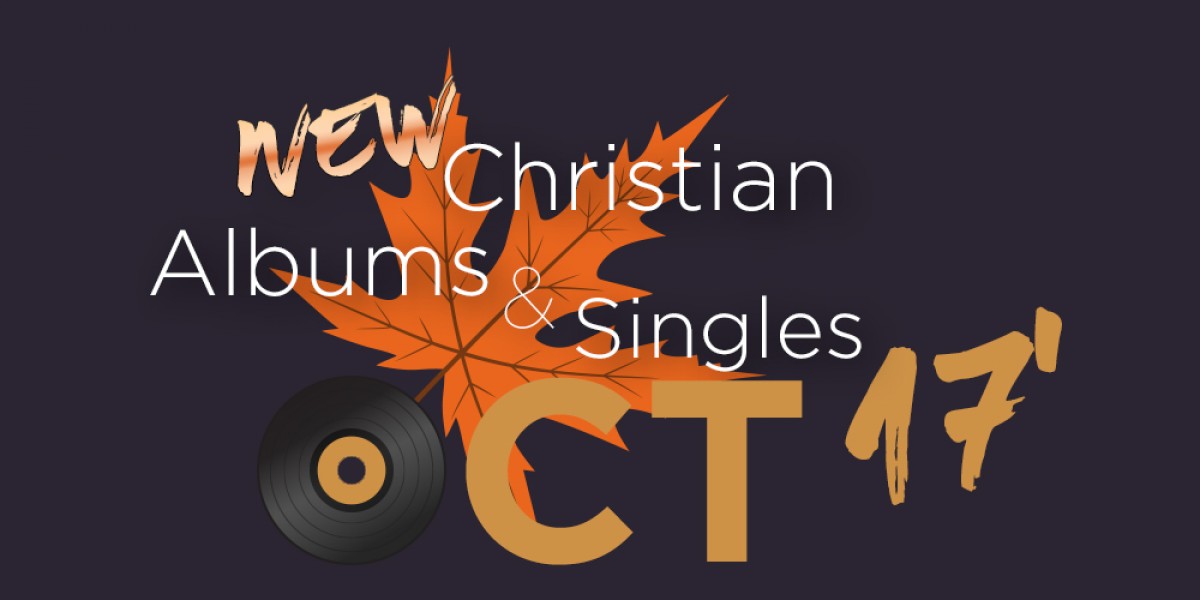 As you rummage through what’s left of your Halloween candy, why not take the time to enjoy some of the new Christian albums and singles from October? We’re coming close to the holidays (you’ll see some Christmas recordings on this list), so now’s the time to enjoy new music before we go full Frosty and Santa. It’s a diverse month for Christian music with new albums from worship bands, vocal groups, rock bands, and solo artists. We know there is a little something for everyone, so find what moves you and give it a listen. Without further ado, here are some of the new Christian albums for October 2017.

This Nashville singer/songwriter has dabbled in worship anthems and acoustic tracks, but his latest album, “Faith Hope Love Repeat,” is a mix of pop/dance beats and empowering lyrics. Following up on past hits like “Give Me Your Eyes” and “Jesus in Disguise,” Heath’s album is one that is full of light tones and fun tracks like “Got the Love” (which features rising Christian artist Tauren Wells). The album also has slower jams like “You’ll Find Love Again” and “Only One in the World” that channel the artist’s earlier hits.

Although most artists break onto the scene with one big song, Anthem Lights has gained popularity from covering songs that are both Christian and secular. As a four-part vocal ensemble, the group has performed renditions and mashups of artists like Taylor Swift, OneRepublic, and more. They even took part in the K-LOVE Fan Awards for a special performance found in the video below. “Painted Skies” is the band’s second album of 2017 having released “Hymns” in April. The new project features a number of original songs that are stripped down messages of hope and healing.

Jeremy Camp is one of the biggest male artists in Christian music, so we know fans of his music have been waiting with baited breath for “The Answer” to finally drop. The album’s first single, “Word of Life,” has been tearing up the Christian music charts over the summer and early fall. You can find plenty of other hits on the album, though, including the title track. A more vocal-heavy worship song, “The Answer” is one that will resonate with fans of Camp’s previous work. On top of these favorites, the album is full of Camp’s traditional sound that listeners have always loved.

“Everything Or Nothing” - Carrollton - New Christian Albums

For those who prefer the sound of a full band rather than a solo artist, Carrollton is a nice alternative. This folksy rock band is a bit of an oddity in today’s music landscape but that’s what makes its presence on this list so refreshing. Carrollton’s biggest recording so far is also a collection of all the things that make for good Christian music: strong musicianship, faith-filled lyrics, and a strong sound. A few of the album’s highlights are “Shelter,” “Rebuilder,” and “Stand My Ground.”

Have you ever been listening to one of the Hillsong worship albums and thought “I’d really like to hear these guys cover my favorite Christmas songs?” If so, you’re in luck. “The Peace Project” brings popular Christmas songs like “Joy to the World” and “O Come All Ye Faithful” to life with a style that is unique to the famous worship group. In addition to these classics, you can also find newer songs like “Seasons” on the album. Far from your standard Christian Christmas album, “The Peace Project” is atmospheric and perfect for the upcoming season.

Christian hard rock may have had its heyday in the mid 00’s but RED is one of the few Christian rock bands to remain relevant over the years. This month the group released its sixth studio album, “Gone.” The group quickly gained popularity with hard-hitting tracks like “Breathe Into Me” and “Never Be the Same.” This month’s release picks up right where the band left off, delivering a number of stirring songs led by “Still Alive” and “Losing Control.”

“Let the Light In” - Ashes Remain

Another Christian rock group that gained a following during the 00’s was Ashes Remain. Though the group’s sound is pretty distinct from groups like RED and August Burns Red (who also has a new album this month), Ashes Remain is pure rock. After a recording hiatus that lasted nearly five years, the group returns in this month’s batch of new Christian albums with “Let the Light In.” Among the early favorites on the album are “Rise” and “All of Me.” Pick up the album and get ready to dust off your air guitar skills.

Micah Tyler has been showing a lot of potential over the last year or two. While he’s technically been recording music since 2013, his popularity has come from a series of YouTube videos (one found below) and a pair of strong singles in “Never Been a Moment” and “Different.” The songs originally appeared on an EP, that recording has since been extended to a full-length album. The new release is a wonderful collection of catchy songs that explore everything from self-worth to the joys of salvation.

As one of the most popular worship bands in Christian music today, Elevation Worship has become a new favorite for many listeners. Putting out 10+ albums over the last decade, Elevation has contributed a number of solid recordings that usher in an atmosphere of worship. “Acoustic Sessions” brings together some of the group’s biggest hits, including several crowd-pleasers from the “Here As in Heaven” and “There Is a Cloud” albums. These acoustic renditions give an interesting spin on these worship hits that fans and new listeners alike will enjoy.

Since we’re starting to approach the end of the year, it’s time to start seeing new Christian albums that focus on Christmas. We’ve already mentioned the Hillsong Worship project above, but you can also get an EP from Casting Crowns titled “It’s Finally Christmas.” The group released a great Christian Christmas album in 2008, but it’s nice to have the new 6-song set. In new music that’s non-holiday related, Jordan Feliz dropped his next single, “Witness.” Following the upbeat sound of his past songs “Never Too Far Gone” and “The River,” the latest jam is one that celebrates God’s grace and love. Lastly, we wanted to highlight an EP that we missed from late September. Jasmine Murray blew up the charts with “Fearless” earlier this year, so we’re excited to hear a bigger collection of music in her first major recording. Her self-titled EP features six songs, including the previously released “Fearless” and “You Belong.”

That does it for this month’s edition of new Christian albums. As you listen to these and other popular Christian songs, be sure to keep in mind that the K-LOVE Fan Awards is coming up soon. Think about which artists and more that you’d like to nominate this year. Even better than voting, why not join us for the ultimate fan experience? Be a part of the amazing performances and special events that make this the biggest show of the year. Find out how you and your family can get in on the fun by clicking below.