11 Old Christian Songs that Still Bring Down the House 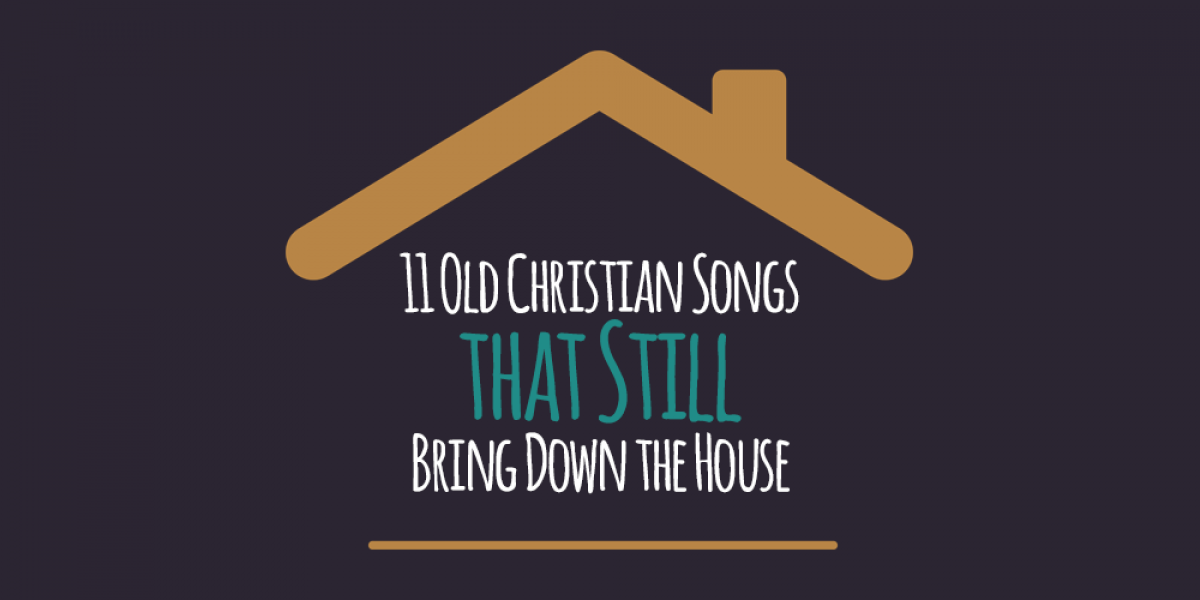 Sometimes we can get so wrapped up in the latest song from Chris Tomlin or Lauren Daigle that Christian music fans lose track of some of the old Christian songs that were staples of traditional Christian worship services. No matter what kind of church or service you attend, there’s a decent chance that more recent Christian songs have become a welcome addition to the old hymns.

When it comes to music, everyone has their preferences. The reception to certain old Christian songs may depend on where you were when you first heard them or what significance the words have had on your own life. Listed below are some of the best hymns to ever come out of the church. Whether you know them or not, it never hurts to go back for a listen.

Jesus Paid It All

It’s safe to say that many believers have a radical change occur in their lives when they commit to Jesus Christ. “Jesus Paid It All” is a hymn that solidifies the atoning power of Christ’s sacrifice, leaving no room for doubt or discussion.

This song has been covered a multitude of times over the years, so there’s often a certain version that sticks out to each generation. For today’s listeners, this rendition from Kristian Stanfill is one of the more popular ones. The line “Oh praise the One who paid my debt and raised this life up from the dead” is the exclamation point for Stanfill’s take on this beautiful hymn.

Another one of the old Christian songs that speaks of the powerful change that takes place at conversion is “Amazing Grace.” This song has been played all too often in just about every film or TV show, but it’s simply one of the best hymns ever written.

Written by a man who had previously taken part in the Atlantic slave trade, the song illustrates that God’s grace is so powerful that it can turn any life around. God has the power to bring sight to the blind and the dead back to life, so what hope can your sin have of holding on to you?

There are about a million versions of this song out there, but here’s one from country singer Alan Jackson that’ll move you.

How Great Thou Art

The old hymns usually focus on certain aspects of God. The first two songs on this list focused on the power of redemption. With “How Great Thou Art,” we simply behold God as the supreme being. Just as you might stand on the edge of the Grand Canyon and take it all in, this song is a response to the magnitude of who God is.

If you ever visited an old country church, you will most likely be swept up the moment the congregation hits the line “Then sings my soul…”

It Is Well with My Soul

We can also use old Christian songs to cope with hard circumstances and tell God “Thy Will be done.” This song was originally composed by a man in the late 1800’s who was facing financial ruin and the loss of his daughters at sea.

Musically, the song is beautifully moving, but the message is what is most important. No matter what comes our way in life, good or bad, God is in control. He cares for us and HIs hands are at work. “It Is Well with My Soul” is a powerful song no matter who is singing it, but it’s hard to talk about classic hymns and not invoke the Gaithers. Here’s a great version of the song from a few years ago.

Turn Your Eyes Upon Jesus

Known mostly for its refrain, this hymn is great because of its simplicity. When the world is moving so fast that it’s hard to keep up, we only have to fix our eyes on Christ to be at peace. When we hunger for truth or need to remember our calling, looking heavenward is a sure fix.

This song can be sung in a large arena like the video below or in a small church on Sunday night and still have the same effect. Let us never forget where we should always be looking.

Sometimes you just need a good country classic. “I’ll Fly Away” is one of the most well-known gospel songs of all time. It’s also one of the few Christian hymns that excellently pairs up with a fiddle and banjo.

Whether you go the traditional choir route or throw in a little bluegrass, this is a song that is fun to sing. “Fun” may not always be the word you want to choose for old Christian songs, but the whole point of “I’ll Fly Away” is that death is not a morbid topic for believers. While there is an element of sadness to a loved one’s passing, we should remember that Christians aren’t just living for the here and now.

Here’s a great pairing Crowder did of the song with “I Saw the Light” in the Georgia Dome a couple of years ago.

It’s hard to compete with a song that lays out the many attributes of God in such a melodious manner. “Holy, Holy, Holy” is like the triumphal entrance music for a great king. The words lay out the perfect nature of God in a way few songs effectively can.

While the song is beautiful as a solo, it takes on a special life when being blasted by a full choir. Still, there is an intimacy to the way Audrey Assad performs it in this video.

Great Is Thy Faithfulness

One of the biggest sources of hope for believers is that God is faithful. Though we may not see it for a time, God is constantly at work throughout the world. He delivers on our requests and dreams in His own time.

“Great is Thy Faithfulness” is a song of gratitude that has a vulnerable honesty to it. When we consider the blessings of God that surround us in the world today, it can be truly overwhelming. This hymn made some big waves through pop culture when Jordan Smith sang it so well on the reality singing competition The Voice.

Written by a blind woman in the 1870’s, “Blessed Assurance” is a call for believers to remember their inheritance with Christ. This sweet melody reminds us that we have a benefactor watching over us who cares for us deeply.

This is another one of the old Christian songs that has been resurrected throughout the years. The video below is a rendition from Elevation Worship

Oh What a Savior!

A little more recent than these other old Christian songs, “Oh What a Savior” was still written nearly 60 years ago. The song marvels at the existence of a Savior who would leave heaven, live a perfect life, and pay for our sins.

This is one of those songs that really allows a vocalist and/or choir to show off. It’s a powerful song in its own right, but with some talent behind the microphone it can become a very special experience. Check out the singing talents of the guys in the video below and you’ll know what we’re talking about.

Crown Him with Many Crowns

Similar to “Holy, Holy, Holy,” this hymn is one that gives all of his due glory. To really enjoy this classic, you’ll need a large choir or a very vocal congregation. The full version of the song is a whopping 12 verses, but there are several shorter iterations out there.

Again, this is the kind of music that you would expect to hear at the coronation of king. What better place to hear it sung than at Westminster Abbey? Check out the video below from the early 2000’s and you’ll understand the magnitude of this hymn.

As any hymn lover knows, there are hundreds (if not thousands) more out there. While this isn't an exhaustive list, we do hope that it brought to mind a few of the old Christian songs that you love hearing in church. At the K-LOVE Fan Awards, we know that music is a huge part of worship. Christian music is a part of everyday life that we all love and enjoy. That's why we honor the entertainers and authors every year who are making a difference in the Christian community. To find out how you and your family can attend the biggest weekend in Christian music, click on the link below.