Why Should I Have to Pay for Christian Entertainment? 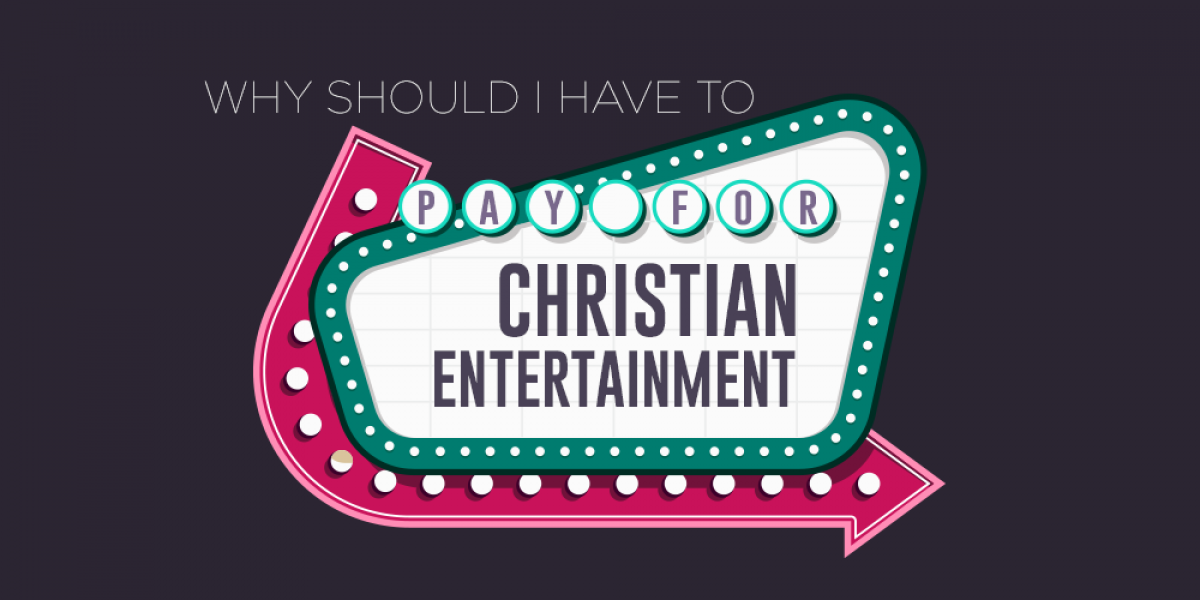 We live in a world with seemingly endless entertainment options. Between TV, radio, internet, smartphones, e-readers, Netflix, etc. our minds are constantly being stimulated one way or another. While there can be negative connotations with so much attention-grabbing, the good news is that we have more Christian entertainment available to us today than in any time in history. You can listen to your local K-LOVE affiliate, read a C.S. Lewis classic on your iPad, and find Christian movies on Amazon Prime all in a single afternoon. If you’re not careful with your time and money, however, these entertainment options can almost become a hindrance to the rest of your life. That’s why we often look for free and cheaper ways to enjoy the content we want to watch or hear. Do we have a moral responsibility to pay for Christian entertainment? At least part of our response would be yes, but the real answer is longer. Let’s look at why you should be paying for at least some of the Christian entertainment you love.

Not Everything is a Charity

As the old song states, “the best things in life are free.” Some of the best forms of entertainment and joy we can experience in this world are free or employ a minimal cost. As Christians, we sometimes feel that certain things should be done just out of the kindness of one’s heart. On a personal level, this is an admirable thing. Perhaps you were sick and a friend from church offered to bring you dinner or perform a chore for you. This is exactly the kind of Christian act of charity that promotes the sort of fellowship and community needed in the body of Christ. However, we can’t expect people to make a career out of doing things for free.

“Why should I have to pay for Christian entertainment when there are so many free sites out there?!” If you think about some of your favorite “free” entertainment services (YouTube, social media, etc.), you will quickly realize that they aren’t quite as free as you originally believed. Either the company makes its money off of selling your internet search patterns (in the case of Facebook and others) or through offering premium content in some sort of subscription model (Hulu, YouTube, etc.). People have to make a living, even in Christian entertainment.

Here’s the truth when it comes to paying for entertainment: your money is going into a lot more than simply the person’s work that you are buying. When you buy the latest Chris Tomlin album, for instance, on iTunes for $9.99, it’s not like that full amount shows up in his account later that day. Between managers, record labels, studio musicians, producers, and so on, there is an entire industry at play here. While we aren’t privy to Mr. Tomlin’s latest contract, we can tell you with certainty that your $9.99 is keeping more than one man’s career afloat.

It’s easy for us to think “Does Michael W. Smith need anymore of my money?” Insert whichever Christian entertainer you think is the richest, but the facts don’t change anything. Christian entertainment is an industry and it employs hundreds, if not thousands, of people. The conferences you go to, the books you read, the live concerts for which you pay for VIP access. All of that feeds back into this hub of Christian entertainment. That leads us to our next point...

Good Artists Shouldn’t Have to Starve

The starving artist is an old stereotype that typically pertains to writers, musicians, and actors. There is certainly some truth to the old saying, but it shouldn’t always be that way. It’s one thing to experience financial failure because your work isn’t connecting with people, but it’s a sad alternative when people love your work but only want it for free. Like we said in the previous point, the Christian entertainment industry isn’t solely made up of lead singers and world famous faces. Everybody, from the people on the poster to the team rigging lights and sound, deserves compensation for their work. If someone walked into your office tomorrow and said “We love what you’re doing but want you to do it for free now,” you’d probably be very confused. You are providing a good or service worthy of payment, right? Entertainment figures share this same feeling.

We’re not saying that you have to buy all of the albums, tickets, etc. but your money should go to the artists whose work you admire. It’s great to take advantage of free options here and there, especially if you are in a tough financial situation, but eventually people need to be paid for their work.

Your Dollar is Your Vote

One of the most important reasons why you should pay for Christian entertainment is because your money is your vote. The best case study for this is when we look at Christian films. After Mel Gibson’s “The Passion of the Christ” made hundreds of millions of dollars, the film world took notice that there was a Christian market waiting to be serviced. This not only led to new movies like “Miracles From Heaven” and “The Chronicles of Narnia,” but it inspired startup groups like Sherwood Pictures to get into the game as well. Although you can cynically chalk up Hollywood’s attempts at Christian films to some level of pandering, Christian churches and religious media groups have also joined in the effort. Without the profitability of these films, the Christian film market would go away. If everyone stays home, the strides made in Christian filmmaking over the last 10+ years could be erased in even less time. When you decide to spend money on any form of Christian entertainment, you are voting to have more content with a similar message. That goes for music, books, movies, and more.

To twist a famous political saying of the 90s, the economy works the way that it works because we have a solid system of exchanging money for goods and services. If people decide to not spend money on Christian entertainment, then that market will dry up. We can’t rely on free options forever because that will eventually lead to artists hanging it up or breaking out into the mainstream market. Not only that, but services like Pure Flix could also go under if customers decide they aren’t willing to pay money for a Christian network of films. Again, no one is asking you to spend more than you are able. Just be willing to buy your favorite band’s new album, that best-selling new book, or a Christian film that interests you and your family. We’re willing to do it with secular entertainment, so what’s stopping us now?

The K-LOVE Fan Awards seeks to support and celebrate the Christian entertainment impacting the spiritual community today as well as connect fans with the artists they enjoy. Find out how you can be part of the ultimate fan experience by clicking on the link below.