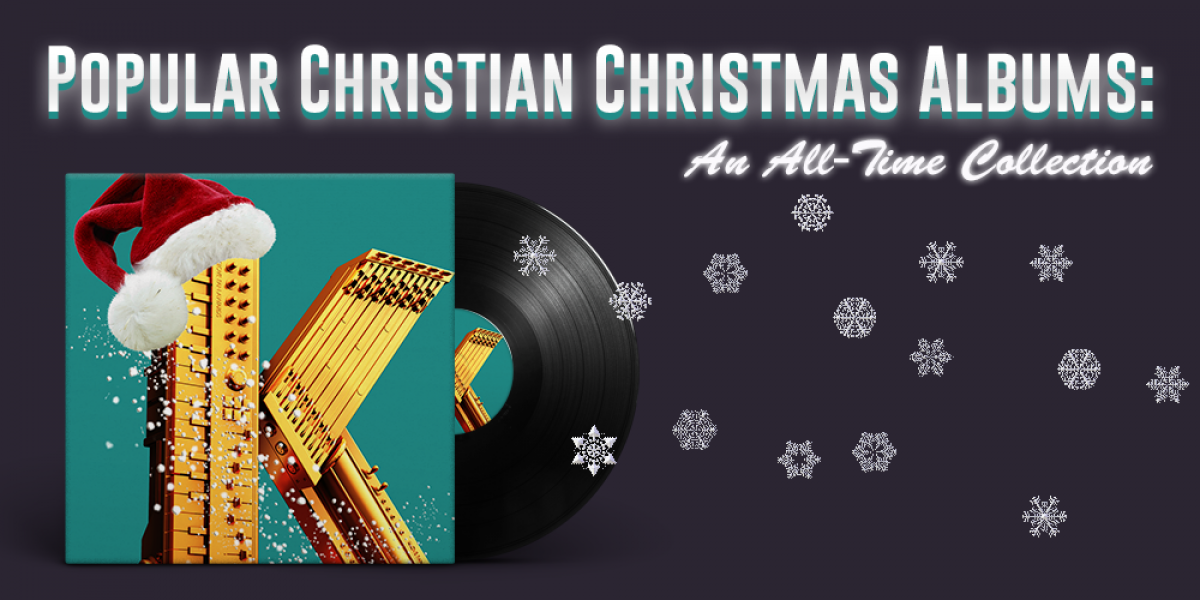 The Christian genre has come a long way in the last several decades. From the classic gospel of Bill and Gloria Gaither to today’s youthful sound from bands like for KING & COUNTRY and Hollyn, Christian music has put together a diverse mix of styles and voices. When it comes to the holidays, the genre has also put out a wide assortment of Christian hits. Spanning the last 30 or so years, we’ve compiled a list of a few of the Christian Christmas albums that have made an impact.

This 2015 album recently took home a Dove Award for Christmas Album of the Year. For his second Christian album, Danny Gokey decided it was time to release a Christmas album. The tone sits well with the singer’s talents, making it one of the best Christmas albums to come out in the last year or two.

Peaking at #1 on the Top Holiday Albums chart, the record does a good job of updating a few Christmas classics and mixing in a few uptempo songs. We had more nice things to say about “Christmas Is Here” in a previous article we wrote, “Contemporary Christian Christmas Songs for the Holidays.”

As one of the biggest names in Christian music these days, it shouldn’t be a surprise that Casting Crowns’ album, “Peace On Earth,” has spent 81 weeks on the Holiday Albums chart at Billboard.

Released in 2008, the album’s feature song is “I Heard the Bells On Christmas Day.” The songs are a bit softer than a traditional Casting Crowns album, but the tone works for the subject matter. Singer Mark Hall’s voice works well with many of the Christmas classics like “Joy to the World.”

“All I Really Want for Christmas” - Steven Curtis Chapman

Chapman is one of the most revered musicians in all of Christian music. Having been on the scene for 30 years, the singer/songwriter has put out over 20 albums in his juggernaut of a career. Of those albums, nearly a dozen have hit gold or platinum status.

“All I Really Want for Christmas” is one of four Christian Christmas albums that the artist has released. While every album has its charm, Chapman has used the holiday albums from his later career as an opportunity to share original or lesser known Christmas songs. “All I Really Want for Christmas” is a blend of Christmas favorites and a few of those not-so-obvious choices. For a recommendation that features even more original work, check out his 2014 album, “Joy.”

Coming out of the Lone Star State, the David Crowder Band left their mark on the Christian music scene during its 16-year run. Starting as a traditional worship band, the group infused a special sound to their music that set them apart from many other Christian artists. Even now that Crowder has become a solo act, he’s still tearing it up.

With their sole Christmas album coming out in 2011, the group put together an 8-song recording that features some of the most popular Christmas songs out there. Some of the song renditions are more traditional than others, but every song feels like it belongs to one era of the band or another. One of the more interesting parts of the album, especially for Christian Christmas albums, is the rocking instrumental track, “Carol of the Bells/Christmas Eve,” found below.

“A Christmas Story” - Point of Grace

Starting in the early 90’s, Point of Grace was a female quartet that rose to fame through their beautiful blending of voices and the ability to tap into the sound of the day. One of the group’s most famous albums is its first Christmas album, “A Christmas Story.”

Becoming one of the best-selling Christian Christmas albums ever, it was a must-have for fans of the genre. Although the quartet is a trio these days, the group is still releasing new music. The ladies have even put out a third and fourth Christmas album since Heather Payne left the group. Some of Point of Grace’s biggest Christmas hits have been “Breath of Heaven (Mary’s Song),” “One King,” and “When Love Came Down.”

Another Christian band that got started in the 90’s is Third Day. A mix of Southern rock band and worship team, the group has been a powerhouse in the Christian recording industry. With “Christmas Offerings,” the group released its first and only Christmas album (so far).

The band’s ability to weave between grungy Southern rock and mainstream sounds is part of the reason why the Christmas album works so well. Songs like “Do You Hear What I Hear?” and “O Come All Ye Faithful” highlight one of the great Christian Christmas albums.

One of the pioneers of the contemporary Christian music industry (along with a few others on this list), Michael W. Smith has a discography that would put most musicians to shame. Similar to Steven Curtis Chapman, the singer has put out over 20 albums.

“Christmastime” was the second gold-certified Christmas album for Smith to release. It was as well-received as the first, 1989’s “Christmas.” He is another artist who has more Christmas albums than many bands have actual studio albums. With “Christmastime,” Smith covers many of the essential Christmas songs with a tenderness and sincerity that is moving. Highlights include “Christmastime,” “Welcome to Our World,” and “Jingle Bells.”

This is what we call “one for the kids.” Relient K has been putting out quality music since the turn of the 21st century. The closest thing there is to Christian punk rock, the band is known for fun lyrics and a youthful rock sound.

With their second Christmas album, the group has a collection of 17 songs that will get you through the holidays. If you’re not a fan of what might be deemed “traditional” Christmas music, this might be an album to look into. Listeners wanting some upbeat music should check out “12 Days of Christmas” or “We Wish You a Merry Christmas.” A more melancholy track would be “I Celebrate the Day.”

MercyMe is another one of those Christian bands who has stayed popular for a long time. From their early success in “I Can Only Imagine” to their most recent work, the group has tapped into a sound that is a mix of fun and authenticity. “The Christmas Sessions” was the band’s first shot at a Christmas album in 2005.

Some of the better songs on the album are “God Rest Ye Merry Gentlemen” and “Silent Night.” If you like the band’s take on Christmas, you can also check out their 2015 Christmas album, “MercyMe, It’s Christmas!”

If you’re looking for a good worship record this Christmas, you might be interested in Chris Tomlin’s 2015 album. As one of the biggest worship leaders of all time, it only makes sense that his Christmas album would also be comprised of worship music.

Taking into account the “reason for the season,” Tomlin’s album is full of Christmas-themed worship songs like “He Shall Reign Forevermore” and “Adore.” There’s also “Noel,” a really good track with Lauren Daigle.

Rounding out the list of popular Christian Christmas albums, you have to mention “Home for Christmas” from Amy Grant. This singer actually got started before Michael W. Smith, so she’s the most experienced of all these artists mentioned. With over 30 million records sold and a couple dozen Dove Awards, Amy Grant has had quite a career.

Grant’s second Christmas album, “Home for Christmas,” went triple platinum. If that sounds impressive, we’ll remind you that her previous album, “Heart in Motion,” went platinum five times over. Those are pretty much Taylor Swift numbers.

Amy Grant has released a number of Christian Christmas albums throughout her career, but “Home for Christmas” features great songs like “Grown-Up Christmas List” and “It’s the Most Wonderful TIme of Year.” The video below is pretty indicative of when the song came out, but albums like these are nostalgic for many.

We know there are so many more popular Christian Christmas albums out there, but we hope this list has reminded you of some of your favorites. You may have even found an album or two that you missed out on the first time.

Christian music is important to us any time of year, but Christmas reminds us even more of what all God has done for us. As a fan of Christian music, you probably want to be a part of any big events happening in the industry. What if we told you that you could see all of your favorite Christian artists together in the same weekend? Throw in a few Christian filmmakers, authors, and athletes and you’ve got the K-LOVE Fan Awards Weekend. To find out how you and your family can be a part of this amazing weekend, click on the link below.