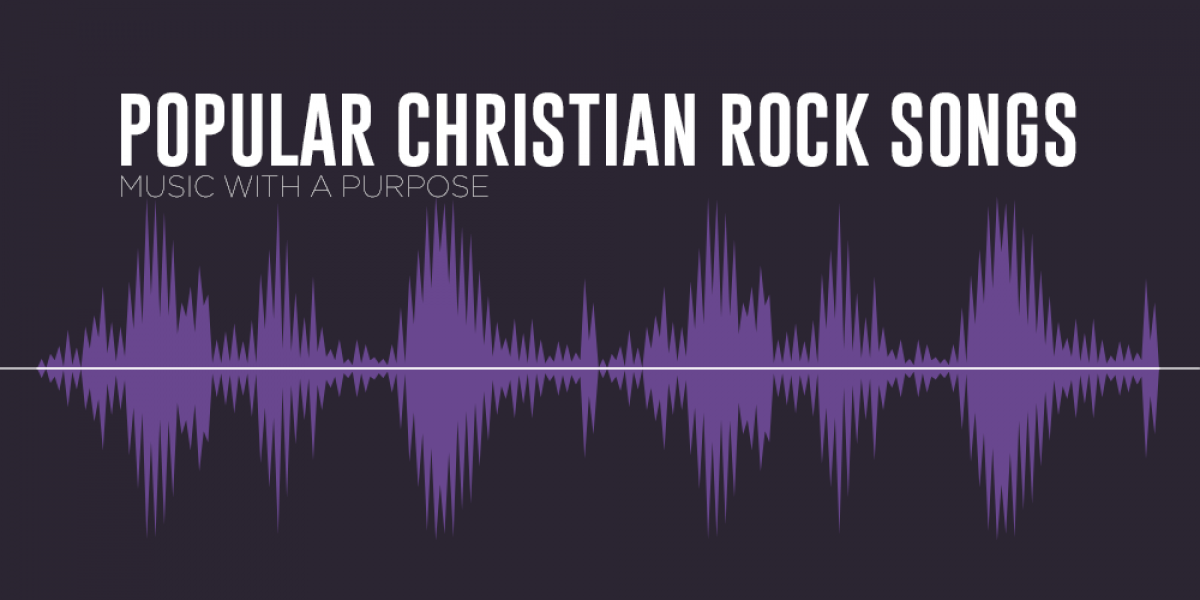 The history of Christian music involves thousands of hymns, decades of pop songs, and more recently, live worship recordings, but rock and roll has also enjoyed its time in the sun. From the 80s rock of Petra to today’s more pop-infused bands, there have been plenty of popular Christian rock songs to come and go over the years. Whether you like to bang your head or simply appreciate a good guitarist, we’ve got some of the most popular Christian rock songs to meet your needs. Check out some old hits and see if your favorite made our list.

A consistent theme in Skillet’s music and many other Christian rock songs is that our spiritual selves are often at war with the higher calling that God has given us. “Monster” is a song that describes this sinful aspect of our being as a roaming beast looking to destroy our identity in Christ and pull us back into the pit from which we’ve been rescued. Among the other popular Christian rock songs that Skillet has produced are “Feel Invincible” and “Hero.”

Mostly known as a hip hop group in the beginning, DC Talk embraced a good amount of rock and roll through the mid-to-late 90s. This was a pivotal time in the formation of Christian rock and “Jesus Freak” was one of the first big tracks to explode across the charts. The song combines just enough of the band’s lyrical talent, hip hop influences, and some killer guitar and drum work for an iconic sound.

RED came onto the scene during the mid-00s when several other Christian rock groups appeared. One of the band’s first big hits was “Breathe Into Me,” a song that speaks to our need for Christ’s constant influence in our lives. When we pull away from God or we are enduring a trial, we find that struggles have a tendency to compound and we quickly succumb to the pressures of this world. RED has a few other popular Christian rock songs, like “Already Over” and “Death of Me,” as well.

Another theme found in popular Christian rock songs is a call to action that is set to a powerful guitar riff. “Frontline” is a 2004 release from Pillar, arguably the band’s biggest hit. The song is about Christians joining together for the cause of Christ and not being afraid to live the life to which God has called them. After going on a bit of a hiatus around 2011, the group came back together for an album titled “One Love Revolution” in 2015.

Around the same time that DC Talk released its highly popular “Jesus Freak,” a new band called Jars of Clay also made its debut. The band would become a crossover success with secular listeners, reminding the world that Christian music doesn’t have to be second rate. The big song that kicked off the group’s career was “Flood,” an acoustic jam with a catchy chorus that broke into the mainstream Top 40 in the mid-90s and led the way to a double platinum record.

In case you were thinking that only the guys could produce popular Christian rock songs. Plumb has been proving that to be false for about two decades. The singer actually shared a label with Jars of Clay for a while, but no matter who is helping her produce records, she’s always had a knack for a quality rock-pop blend. “I Can’t Do This” is about the helpless feeling that we all get, one which leads us to cry out to God just to make it through the day.

“Dare You to Move” - Switchfoot

There are several bands who have created popular Christian rock songs and gone on to find success outside the Christian market, but few have been able to do it as seamlessly as Switchfoot. The group’s fourth album, “The Beautiful Letdown,” brought massive success as well as the opportunity to repackage a previous single titled “Dare You to Move.” The album was also part of a move to Columbia Records that led to a string of hit records. Other great rock songs from Switchfoot include “Meant to Live” and “Let It Out.”

Nu metal and rapcore are just two of the adjectives that have been used to describe the Christian rock band P.O.D. (Payable On Death). The group has a noticeable California influence which led to reggae and hip hop being infused with its hard rock sound. The band’s fourth studio album, “Satellite,” found a large audience thanks to its combination of positive messaging and a heavy rock sound that was palatable for MTV viewers. “Alive” is a song that highlights this positivity and speaks of starting a fresh, new life.

Let’s show our neighbors to the north some love and talk about the guys from Thousand Foot Krutch. This Canadian rock group has been making great music for nearly two decades. Although some Christian rock bands have called it quits in the past few years, Thousand Foot Krutch is consistently making music. “Courtesy Call” is different from some of the other popular Christian rock songs in that it’s more of a hype track than something definitively spiritual. While some Godly lyrics would be great, it’s a fun song all the same.

The mid-00s weren’t just a good time for hard rock bands like RED and Thousand Foot Krutch, as the rock genre also saw a rise in punk-influenced bands like Relient K and Hawk Nelson. The former’s music mostly revolves around relationship drama and random pop culture references, but there are songs about faith as well. “Who I Am Hates Who I’ve Been” is a personal song about regret and making amends with which we can all relate.

As we learned from the singer known as Plumb, women are perfectly capable of producing popular Christian rock songs. Fireflight’s “Unbreakable” is an empowering song that speaks of the attacks in life we all face and how we can find strength through the Lord. The Florida-based group, composed of Dawn Michele and Wendy and Glenn Drennen, has been in action since 1999 but the band hit it big in the late 00s. Some of Fireflight’s other hits are “For Those Who Wait” and “Desperate.”

We know some of our popular Christian rock songs have been coming from group’s that have either hung up their instruments or drastically changed their sound/lineup, but Needtobreathe is still one of the most famous Christian rock bands around. The group really hit its stride with the 2009 album, “The Outsiders,” which features the song “Something Beautiful.” It’s a single about the feeling you get when nothing is going as you planned and you just want to cry out to God for Him to show you something worth pursuing.

“Get Down” - Audio Adrenaline

Wrapping up with one of the popular Christian rock songs of the 90s, “Get Down” is a fun jam about humility and learning to cope with setbacks in light of who God is. (We know, “a fun jam about humility” is probably a statement that’s never been made before.) The song was featured on Audio Adrenaline’s 1999 album, “Underdog.” That album also produced a great title track and “Hands and Feet.”

These are just some of the popular Christian rock songs that have been released in the last 20+ years. For more options you could look to groups like Disciple, Newsboys, Kutless, and the O.C. Supertones. Today’s rock music has become more of a pop combination, but there is plenty of great music being made. At the K-LOVE Fan Awards, we want to celebrate songs like these and the artists who craft them. To find out how you can come be a part of the ultimate fan experience, click on the link below.