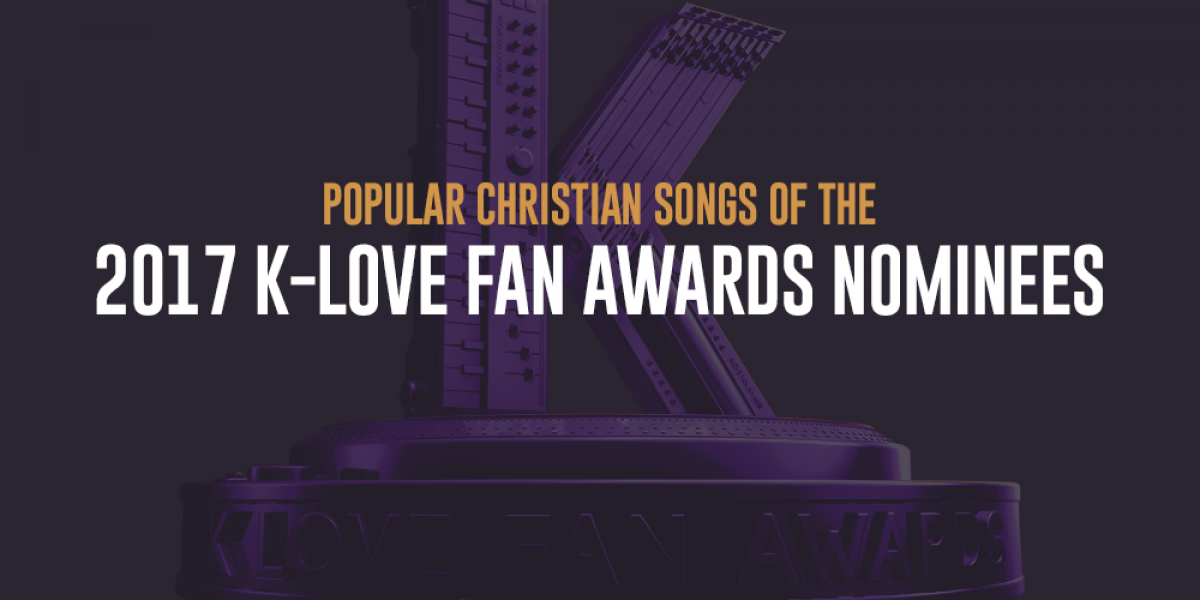 We all have our favorite Christian singers and performers who inspire us and provide the soundtrack for our daily lives. At the K-LOVE Fan Awards, we’re thrilled to be able to provide the opportunity for fans to meet many of the biggest Christian artists and to take part in a full lineup of jaw-dropping performances and special events. One of the best ways to prepare for the K-LOVE Fan Awards is to listen to the nominated artists and all of the great songs they’ve been a part of. Here are a few of the popular Christian songs released by the 2017 nominees for Male Artist of the Year, Female Artist of the Year, and Group or Duo of the Year.

Meredith Andrews - “Not For a Moment (After All)”

This singer had a streak of hot singles from 2008 to 2013 with her albums “The Invitation,” “As Long As It Takes,” and “Worth It All.” Like most of the artists on this list, Andrews has spent a fair portion of her musical career leading worship in church including with the popular Vertical Church Band. “Not For a Moment (After All)” is a powerful song of affirmation thanking God for always being there and watching over us, even in the hardest of times. Other popular Christian songs from Meredith Andrews include “You’re Not Alone” and 2016’s “Spirit of the Living God.”

One of the biggest winners from the 2016 K-LOVE Fan Awards was Danny Gokey, taking home awards for Male Artist of the Year and Breakout Single. Having crossed over from the post-”American Idol” pop scene, Gokey made a name for himself with Christian listeners off of the album “Hope in Front of Me.” Full of inspiration, “Tell Your Heart to Beat Again” is a song that recognizes both the reality of life’s tragedies as well as the need to move on and continue fighting. Gokey’s latest album, “Rise,” came out in January 2017.

For 15 years, Big Daddy Weave has been one of those bands whose music always leaves you feeling better. Starting in the ‘00s with songs like “Audience of One” and “Every Time I Breathe”, the group has had a warm country sound that delivers the gospel in such a comforting way. “My Story” is yet another of Big Daddy Weave’s popular Christian songs that inspires with a simple truth: We all have a story of how God has changed our lives. We shouldn't overlook the amazing things that God has done for us and we certainly shouldn’t keep quiet about them.

Francesca Battistelli - “He Knows My Name”

Francesca Battistelli has a sound that evokes the fun attitude of mainstream artists like Sara Bareilles. With her first album, “My Paper Heart,” the singer gave listeners the upbeat jams of “I’m Letting Go” and “Free to Be Me.” Her sound has matured in recent years, but there’s still plenty of fun to be had with popular Christian songs like “Giants Fall” and “Write Your Story.” The great thing about “He Knows My Name” is the recognition of God as our personal Savior. He isn’t some distant supreme being, but the Holy Creator who formed you inside and out.

One of the biggest names in Christian music, Tomlin has written many successful Christian songs and in part completely changed the worship landscape. Among his many awards and accolades are four K-LOVE Fan Awards, the latest being Song of the Year in 2016 for “Good Good Father.” One of Tomlin’s earliest and biggest hits is the anthem “Our God.” Listing off many of God’s attributes, the song is pure praise and adoration for the One who made us.

A unique sound all their own, Needtobreathe has been a rock band with a devoted fanbase for years now. Mixing Southern rock, CCM, and today’s more modern sound, the group is ticking all the right boxes with each new album. A repeat nominee for Group or Duo of the Year, the band has a number of great singles that have impacted listeners over the years. “Multiplied” is a signature Needtobreathe song that combines powerful vocals, some catchy guitar work and heartfelt lyrics.

A two-time Female Vocalist of the Year at the Dove Awards, Nordeman has been an empowering voice in the music industry for years now. With hits ranging from 2015’s “Slow Down” to earlier songs like “Legacy” and “Brave,” the singer has proved that she can handle pop, acoustic, and anything in between. “Holy” comes from the 2002 album “Woven & Spun.” The song, which peaked at the top of the Christian music charts, is about how God’s path is the one that will ultimately lead to purpose. Anything else will only leave you broken and lost.

Among the most easily recognized Christian musicians out there, Crowder’s latest musical endeavor has produced a blend of worship anthems, Southern rock jams, and just about anything else he sets his mind to. His strong worship background lends to the pick of “My Victory” as it captures both his new sound and the one heard in the David Crowder Band years. It’s also nominated for Worship Song of the Year at the 2017 K-LOVE Fan Awards.

At this point, pretty much everyone on the planet has heard MercyMe’s mega hit “I Can Only Imagine.” After that massive success, the band has consistently been able to release great new Christian albums full of catchy songs. “Greater” is one of those songs that speaks truth while also being incredibly fun to listen to while driving down the highway. MercyMe just released their newest album, “Lifer,” in March.

Hillary Scott & the Scott Family - “Thy Will”

When you’re starting out on a new musical journey, it never hurts to have runaway success with your first single. Hillary Scott is no stranger to the music scene, but she’s had a strong year with her debut Christian album, “Love Remains.” The album has a great song in “Still,” but it’s “Thy Will” that resonated so well with listeners in 2017. Both are popular Christian songs that have a lot to say about trusting in God and letting Him move through our lives in whatever way He sees fit.

Camp has always ridden the line between rock and worship, so it just makes sense to recommend this 2015 song that blends both. “He Knows” has the sound of a traditional worship anthem, but Camp’s vocals give the track a little extra umph, especially as it progresses to the bridge. Some other popular Christian songs to check out from the same album are “Same Power” and “Christ in Me.”

With three nominations at this year’s K-LOVE Fan Awards, the guys from for KING & COUNTRY are still going strong. “Priceless” seems like an easy choice here because it’s not only one of the most popular Christian songs of the year, there’s even a film by the same name. This band has cemented their place in today’s music scene with a big sound, incredible stage presence, and beloved songs like “The Proof of Your Love” and “Fix My Eyes.”

Lauren Daigle - “How Can It Be”

Lauren Daigle will try to mimic the success she had at the 2016 K-LOVE Fan Awards, winning Artist of the Year and Female Artist of the Year, as she is also nominated for three awards. The singer has had many successful tracks to come out of her full-length debut album from 2015. In fact, “Trust in You” is even nominated for Song of the Year. Daigle’s first single, “How Can It Be,” completely swept the industry due to the power of her voice and the truth in its lyrics.

TobyMac - “Made to Love”

As one of the most highly awarded and respected Christian music artists working today, it just wouldn’t be right if we didn’t see TobyMac at the K-LOVE Fan Awards. The singer has had many hits during his long career, including “Me Without You” and “City on Our Knees.” Each song delivers humility and perspective accompanied by a great beat that sticks with you throughout the day. “Made to Love” may be ten years old at this point, but it is still one of the singer’s most popular Christian songs.

Casting Crowns is a band that has entertained and inspired their fans for nearly 15 years since the release of their debut album. Along the way there have been so many great songs like “Who Am I” and “East to West.” Partnered with the film by the same name, “Courageous” is a song about taking charge of your faith and refusing to live life from the sidelines.

Natalie Grant - “King of the World”

There are very few Christian female singers who have had the success of Natalie Grant. Winning Female Vocalist of the Year five times in seven years at the Dove Awards is a feat that few could ever consider a possibility. After earlier success with wonderful songs like “Held” and “In Better Hands,” the singer continues to impress with her latest efforts. “KIng of the World” comes from Grant’s 2015 album “Be One” and showcases the singer’s great talents. The song is a reaffirming one that will immediately put you in the mood for worship.

Serving as host of the K-LOVE Fan Awards for another year, Matthew West knows just how much fun the Nashville event can be. As a performer, West has been able to share so many empowering songs with listeners through the years. Many of his most popular Christian songs are a call to take action. For example, there’s “Do Something,” “Day One,” and “Hello, My Name Is,” all of which are about starting a new chapter and moving forward. Another great song that fits that mold is “The Motions.” Honest and full of hope, the song’s message will resonate with listeners who want to get serious about their faith.

You would be hard pressed to find another Christian rock band that goes all out quite like Skillet. With over 20 years in the business, these guys still put on one of the most energetic live shows in Christian music. They’ve also been daring enough to change their sound from time to time. Some of their best songs to check out are “Monster,” “Hero,” and “Savior.” For a fitting introduction to the band that’s a real crowd-pleaser, you can’t go wrong with “Stars.”

That does it for our roundup of some of the most popular Christian songs from our 2017 K-LOVE Fan Awards nominees. If you can’t make it to the show in Nashville on Sunday, May 28, be sure to join us in select theaters nationwide for the screening of “Ignite Hope” on Tuesday, June 13. Find out more details about attending future K-LOVE Fan Awards events by clicking below.