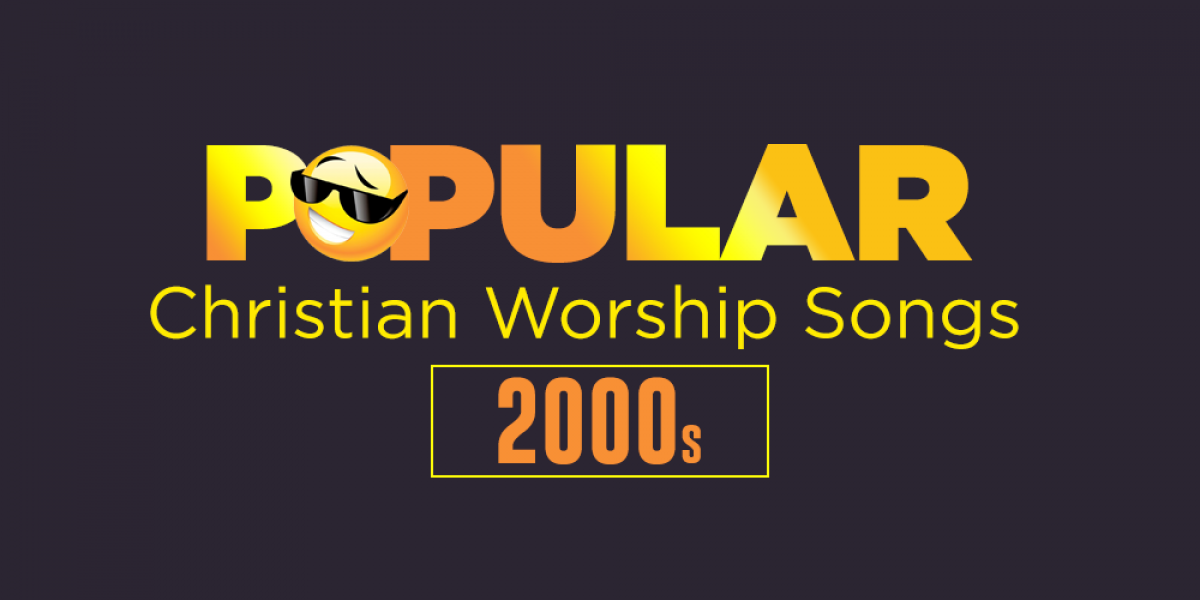 Worship music has been around for centuries. For the longest time, traditional hymns were the main form of musical worship that Christians could use to praise God. In recent decades, the Church seemingly began to embrace more contemporary styles of Christian music. This led to the careers of artists like DC Talk, Amy Grant, and Michael W. Smith. In the late ‘90s and early ‘00s, though, Christian music gave birth to a new worship movement. While there were still plenty of great Christian musicians turning out radio hits, there was a newfound spirit for writing popular Christian worship songs that could easily be used in both church services and youth groups.

Out of this movement came some of the most well-known artists working today, like Crowder, Chris Tomlin, and Casting Crowns. Christian music continues to grow and change today, but a generation of songwriters and worship leaders found a voice during the ‘00s. Here are a few of the popular Christian worship songs that made an impact in those years.

“I Can Only Imagine” - MercyMe

One of the best crossover success in Christian music, “I Can Only Imagine” was a massive hit for MercyMe. When you factor in that this was their first single under a new label, it’s even more impressive. The song was written by singer Bart Millard after the passing of his father. Written from the heart, it found an audience who could also identify with loss and the hope of Heaven.

“I Can Only Imagine” earned the group two Dove Awards in 2002 and has offered hope and peace to millions of listeners over the years.

After spending several years helping artists like Michael W. Smith and Jaci Velasquez with their musical success, Mullen got a chance at her own hit song with 2000’s “Redeemer.” Winning three Dove Awards, the song quickly became one of the most played on Christian radio stations. Soon after, Mullen received more accolades for her inspiring “Call On Jesus.”

“How He Loves” - David Crowder Band

Before going solo, David Crowder was the frontman for one of the biggest worship bands in the country. It all began when he and a few friends decided to serve as worship leaders in their community. Over a period of 15 years, the group released more than a dozen albums that featured a number of popular Christian worship songs.

One of the band’s biggest hits came from the 2009 album, “Church Music.” Originally written by John Mark McMillan, “How He Loves” complimented the David Crowder Band sound and became an instant success. The powerful chorus makes this worship song one of the most popular tracks in circulation nearly a decade after the band first recorded it. Similar to “I Can Only Imagine,” McMillan wrote the song after experiencing a profound loss. “How He Loves” was nominated for Rock/Contemporary Recorded Song of the Year at the Dove Awards and the album won Praise and Worship Album of the Year.

“City on a Hill: Songs of Worship and Praise” was a compilation of popular Christian worship songs from artists like Sonicflood, Caedmon’s Call, and Jars of Clay. The biggest hit from the album was “God of Wonders,” a team-up of Mac Powell from Third Day with Cliff and Danielle Young from Caedmon’s Call.

The compilation album went on to win Special Event Album of the Year and Third Day took home Artist of the Year at the Dove Awards. Meanwhile, the song became very popular in church services across the country for years.

Tomlin’s first album was 2001’s “The Noise We Make.” After serving as a worship leader for youth conferences and special events, the singer/songwriter was ready to start making music of his own. One of the first popular Christian worship songs to come from the album was “Kindness.” The song was a simple acoustic ballad to the Lord. “The Noise We Make” also features the worship song “Forever” which was well received. As you can imagine, this won’t be Tomlin’s only appearance on the list.

Like “Open the Eyes of My Heart” and other simple worship songs, “Here I Am to Worship” is a song with lyrics that are easy to remember. As a straightforward call to worship, the song became immensely popular in youth groups and other worship settings. Since being released, “Here I Am to Worship” has been covered by Michael W. Smith, Hillsong Live, Jeremy Camp, and more. Roughly 15 years later, it is still one of the top 20 songs sung in churches each week.

Matt Redman has been considered one of the best worship leaders and songwriters for the last 15-20 years. With well-known worship songs like “10,000 Reasons” and “The Heart of Worship” under his belt, the British singer has been popular among Christian music lovers for quite some time. “You Never Let Go” came from Redman’s eighth studio album, “Beautiful News.” The song is an uplifting one that reminds believers that God is in control no matter what situation we are experiencing.

“How Great is Our God” - Chris Tomlin

Through Tomlin’s first few years on the scene, he was more of your typical acoustic guitar-wielding worship leader. The artist quickly learned how to mold his talent into a sound that would resonate with the biggest audience. With his second album, Tomlin released a handful of great worship songs like “Famous One” and “Unchanging.”

As for “How Great is Our God,” it is one of the most popular Christian worship songs to this day. It’s been covered and re-released a number of times, including this multilingual version from the 2012 Passion Conference.

Just barely making it into the ‘00s is “Revelation Song.” Covered by Phillips, Craig, and Dean, Kari Jobe, and a handful of other Christian artists, this is one of the most powerful worship songs to come out in recent years. The lyrics are meant to transport you to Heaven itself, as if you were having a worship service face to face with God. It’s a beautiful song that really speaks to people.

Technically, Marie Barnett wrote “Breathe” in 1995, but the song didn’t make it big until Michael W. Smith and Rebecca St. James covered it in the early ‘00s. One of the more simply-worded worship songs out there, “Breathe” became popular through its moving chorus of “And I, I’m desperate for you / And I, I’m lost without you.”

Although UNITED is arguably the most popular division of Hillsong today, they were just introducing themselves to an American audience in the ‘00s. “All of the Above” was released in 2007 and with it came one of Hillsong’s most popular worship anthems to date. “Hosanna” is tailored after Jesus’ entrance to Jerusalem where the people waved palm branches in celebration. On top of being a great worship song, it also served as one of the first of many iconic songs that the band would release. On the same album, you can find “Lead Me to the Cross,” which is another one of the popular Christian worship songs from this time period.

Music has a powerful connection with listeners, especially when it takes them back to a particular time and place. There’s a good chance that seeing one or more of these songs did the same to you. At the K-LOVE Fan Awards, we love to see how music can impact people across the globe. That’s why we host the biggest fan-voted awards in Christian music. During the K-LOVE Fan Awards Weekend, fans can see amazing performances, meet some of their favorite artists, and enjoy a one-of-a-kind awards experience. Find out how your family can attend by clicking on the link below.