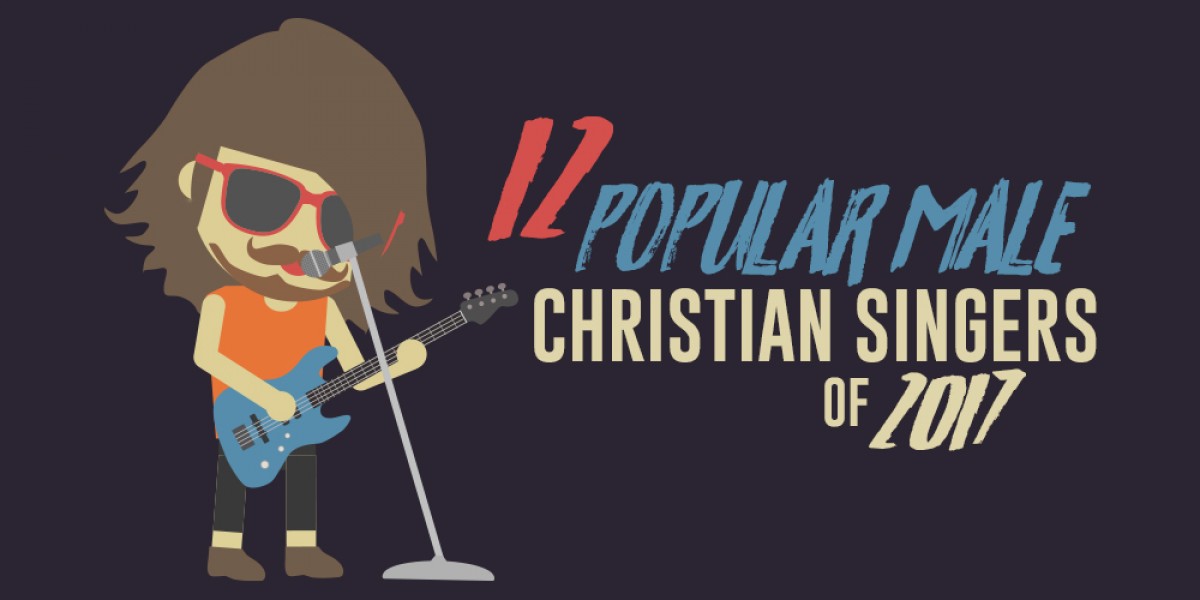 The most popular male Christian singers of 2017 are part of a group that features worship leaders, rock and roll singers, and pop voices that declare Biblical truths in a creative way. God uses the songs that these musicians craft or perform to speak to us in our daily lives. They offer words of encouragement and motivate us to deepen our relationships with our Creator. Each of these popular male Christian singers offers his own take on both faith and music, giving listeners a rich library of songs to enjoy every year. Here are some of the year’s best voices.

One of the hottest rising Christian musicians in 2017 is Tauren Wells. The former Royal Tailor frontman has embarked on a successful solo career thus far with chart-topping hits like “Hills and Valleys.” Wells released his first full-length album in June of this year, when it peaked at #5 on the list of Top Christian Albums. His latest collaboration is a song called “All My Hope” with Crowder, which is a name you just might see later on this list of popular male Christian singers of 2017.

Another act that has gained a lot of steam in the last year or two is Zach Williams. Everyone who listens to Christian music has heard “Chain Breaker” by now. The song took home the K-LOVE Fan Award for Breakout Single and the Dove Award for Pop/Contemporary Recorded Song of the Year. Since that song’s release, Williams has put out his debut album as well as a great follow-up single in “Old Church Choir.” The rocker-turned-worship leader has made excellent use of his Christian music debut and we look forward to seeing what comes next.

One of the more established popular male Christian singers of 2017 is a vocalist by the name of Jeremy Camp. The man has released over a dozen albums in 15 years, five of which have hit #1 on the Top Christian Albums chart. This fall we saw the release of his latest project, “The Answer.” Among the album’s many powerful songs is the radio favorite “Word of Life.” The artist has always blended rock and worship together for an exciting mix of sounds and the latest record shows that that isn’t changing anytime soon.

Just to show how successful Christian music has been at cultivating new talent lately, Micah Tyler is yet another voice the genre has welcomed in recent years. Journeying from a parody songwriter to soulful hitmaker, Tyler has shown he has the chops for the music business. The singer recently put out the album “Different,” an update to his successful EP of the same name. Aside from a moving title track, the record’s other big hit is “Never Been a Moment.” These two songs combine with other wonderful recordings for a great debut album.

We may be a little biased toward the soon-to-be-4-time host of the K-LOVE Fan Awards, but Matthew West is one of the most inspiring artists in Christian music today. West is another singer with well over a decade under his belt. His last five albums, including this year’s “All In,” have hit the top 10 in Christian albums. The frontrunner for that album’s biggest hit is “Broken Things,” a song that acknowledges how we don’t have to be perfect to make a difference.

It’s hard to make a list of popular male Christian singers and leave off someone as influential as Chris Tomlin. Although the worship leader didn’t release a new album this year, his 2016 album, “Never Lose Sight,” has been sitting at the top of the sales charts for over a year. Tomlin has touched millions of lives with hit songs from the record like “Good Good Father,” “Home,” and “Jesus.” The recording even won Worship Album of the Year at October’s Dove Awards.

This Canadian worship leader has been on a bit of a roll since his 2009 album, “Alive Again,” introduced many listeners to well-regarded songs like “Christ is Risen” and “Hold Us Together.” Over the years Maher’s music has delivered several tracks that bring the soulfulness of gospel music to a more singer-songwriter sensibility. In the fall of 2017 he released his ninth album, “Echoes,” which has the stirring “Your Love Defends Me” in its repertoire.

This singer’s 2015 album, “Fresh Start,” brought his music to a much wider audience thanks to the powerhouse hit “Eye of the Storm.” That single just tied Zach Williams’ “Chain Breaker” for Pop/Contemporary Recorded Song of the Year at the 2017 Dove Awards. Building on that success, Stevenson also released “The Gospel” in March 2017. This pair of chart-topping songs is springboarding the artist into a new level in the Christian genre.

One of the people who helped Stevenson achieve this “fresh start” is also one of the most popular male Christian singers of 2017. TobyMac and his label have done a lot to build up new talent like Stevenson and Hollyn. Just because he’s been making a difference behind the scenes doesn’t mean that TobyMac’s music has slowed down in any noticeable way though. The entertainer’s 2015 album, “This is Not a Test,” is still on the bestsellers list over 100 weeks after its release. With nearly 30 years in the business, it’s no surprise that TobyMac is still one of the best talents out there.

Another young talent on the Christian music scene is Jordan Feliz. This West Coast artist made it big in Nashville upon the release of his 2015 album “Beloved.” That quickly became a new recording called “The River,” named after the ultra-successful single. Feliz may have been named New Artist of the Year at last year’s Dove Awards, but 2017 was another great year for the musician. He released a live EP titled “1 Mike 1 Take” that covered his biggest songs in a new way as well as a new single called “Witness.”

As a back-to-back winner of the Male Artist of the Year award at the K-LOVE Fan Awards, Danny Gokey is clearly popular with the Christian audience. His Christian debut album from 2014 revealed his heart and captured a fan base, but this year’s follow-up, “Rise,” is about taking the next step. The title track was one of the year’s first big singles and it was later followed by “The Comeback,” an encouraging song about never giving up. Given his dominance in the genre in recent years, it’s no surprise that Gokey is one of the most popular male Christian singers right now.

We teased his appearance in the first entry on this list of popular male Christian singers and now we deliver on that promise. Crowder is far from a novice in the Christian music world. With over two decades in the business, he knows what it takes to make great music that connects with listeners. After changing course a few years ago, Crowder showed that he’s still got plenty of gas left in the tank. His latest album, “American Prodigal,” has spent over a year on the Top Christian Albums chart. Most of that success is due to 3-4 fantastic songs of which fans can’t get enough.

That does it for our list of the year’s popular male Christian singers. While there are many wonderful artists making great music right now, these guys are really killing it.

At the K-LOVE Fan Awards, you can see many of these artists as well as plenty of other bands and entertainers who bring us the content that we love. Click on the link below to find out how you can enjoy the ultimate fan experience by getting to see the top names in Christian music, movies, and more at this can’t-miss event.