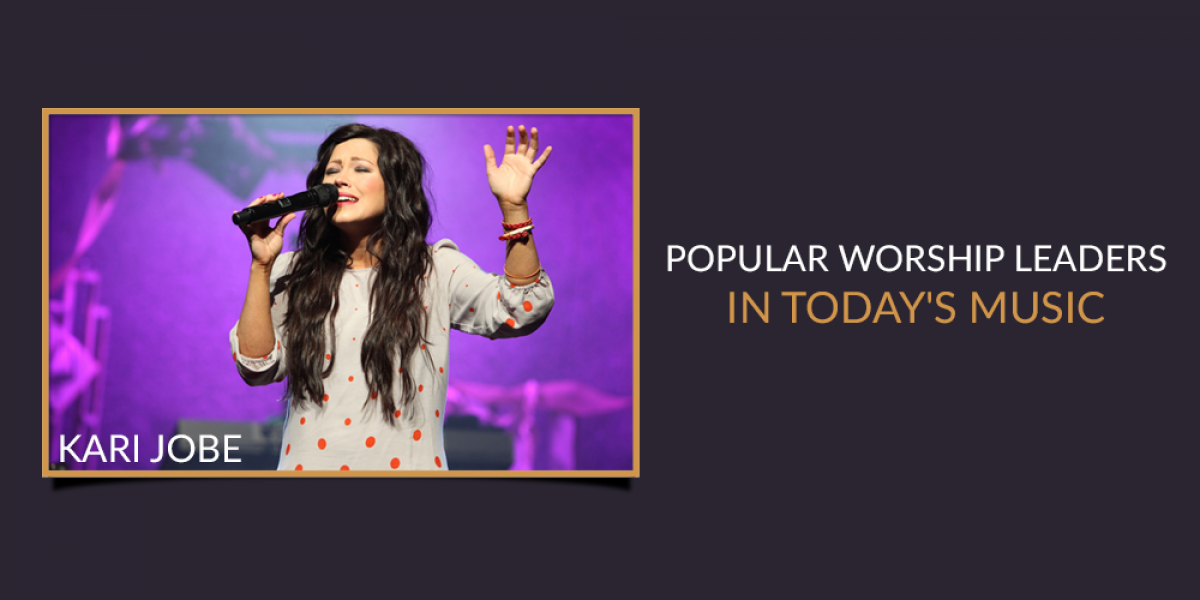 You could say that most, if not all, of Christian music could be classified as worship music. After all, the point of the genre is for God to get the glory. While there was plenty of good Christian music in the early days, the late 90’s and early 00’s gave birth to a new kind of Christian sound. With the development of popular worship leaders, there become a generation’s worth of praise songs that could be heard in a Sunday worship service just as easily as the car radio or during a stadium concert.

Even within the worship movement, there are different kinds of bands with different sounds. The one thing that unites these popular worship leaders of today is a desire to make the name of Jesus great. While there are some acts that don’t make our list, these are some of the most popular worship leaders out there today. Even if you don’t own of their CDs, there’s a good chance that you’ve heard their music.

It would be difficult to make a list of popular worship leaders of today and not include what is arguably the biggest worship act on the planet, so why not start there? Australia’s Hillsong Church has a long history of creating well-known Christian music. Starting in the 90’s with songs like “Shout to the Lord” and others, the church began to impact worship ministries worldwide.

While the casual listener may not be able to tell the difference, there are actually several branches to the Hillsong family. Hillsong United was started as part of the church’s youth ministry near the turn of the century. Hillsong Live was the original worship team in Australia, although they have since changed their name to Hillsong Worship. There’s also Hillsong Young & Free, which formed in recent years. This is another worship group under the Hillsong umbrella, though its sound is a little more of a pop flavor. We could go on and on about just how much these guys have expanded, but you get the point.

As far as these groups’ impact on the current worship landscape, it’s simply massive. Very few Christian acts can write hit songs and sell out stadiums quite like these guys. To find out more about Hillsong United and a few of the other bands on this list, check out our piece on the most popular Christian bands of 2016.

In the same spirit as Hillsong, Elevation Worship is the musical branch of Elevation Church. Having been on the scene for ten years, the group started to get national exposure with the release of their 2010 album “Kingdom Come.”

Elevation runs some similarities to Hillsong, but one thing they do that’s a little different is live acoustic videos that feature a chorus of singers in a simple setting. The music is effective on its own, but the videos add an extra depth to the worship songs. Here’s an example of one for “Here As In Heaven.”

One of the most popular worship leaders of all time, Chris Tomlin has been releasing mega hits in Christian music for nearly two decades. Since releasing his first album in 2001, Tomlin has become known as one of the best singer/songwriters in the business. With a Grammy and over 20 Dove Awards, we can’t think of too many other musicians out there who have impacted Christian music as much.

In 2016, Tomlin released his ninth studio album, “Never Lose Sight.” Hitting #1 on the US Christian albums chart, the album included the hit songs “Jesus” and “Good Good Father.” Tomlin is nominated for Artist of the Year and Male Artist of the Year at the 2017 K-LOVE Fan Awards.

After getting her start as an associate worship pastor and member of the Gateway Worship group, Kari Jobe became a solo act in the late 00’s. With her self-titled release, Jobe cemented her place among the popular worship leaders in Christian music. The album featured worships anthems like “Revelation Song,” “Healer,” and “You Are For Me.”

Since then, the singer has had a few radio hits like “We Are,” but she’s had a steady eye on creating worship music. One of her biggest songs came in 2014 with the popular “Forever.” As part of the live worship album “Majestic,” Jobe created a number of great worship songs that culminated in a powerful set. With her latest album, “The Garden,” the singer adds heartfelt worship songs like “The Cause of Christ” and “Heal Our Land.”

Live worship albums are kind of the hallmark of popular worship leaders today, so it makes sense that Jesus Culture has released around a dozen of them. Like many worship groups, Jesus Culture was created out of an already existing worship team at Bethel Church.

Known for their ability to create a powerful worship environment, the group has a long history of success and features several artists who have gone on to make their own music. Jesus Culture’s hit song, “Fierce,” is nominated at the 2017 K-LOVE Fan Awards for Worship Song of the Year.

Since we already mentioned Bethel Church, we might as well throw the guys at Bethel Music into the conversation. More of a worship collective than a band. Bethel Music is home to a number of great worship leaders.

The combined group has put out a number of worship albums like 2016’s “You Make Me Brave” and “Have It All” in 2014. Some of the collective members who have gone on to their own solo projects include Jonathan David and Melissa Helser, Amanda Cook, and Brian and Jenn Johnson. Putting all this great music together would result in a wonderful worship playlist.

Like Bethel and Hillsong, Vertical Church is a homegrown worship team that began to make worship music for a bigger stage. Part of the Harvest Bible Chapel in Chicago, this group doesn’t have the discography that many of these other popular worship leaders have. Vertical Church Band only starting releasing full-length albums in 2012, but they’re quickly catching up to their counterparts. To get a sample of the band, try out “Spirit of the Living God” and “The Rock Won’t Move.”

If you’ve ever talked to a Christian college student, there’s a good chance you’ve heard of the Passion Conferences held most years in Atlanta, GA. Spearheaded by Louie Giglio, the conference boasts one of the best worship environments we’ll see this side of heaven. Passion is somewhat of a worship collective itself, having featured Kristian Stanfill, Charlie Hall, and a number of other worship leaders over the years.

Though the band does work outside of the conference, each year offers a new live recording of the group and other select Passion conference artists. Featuring guest musicians like Chris Tomlin, David Crowder, Matt Redman, and more, Passion is a very influential worship band for today’s Christians. Some of the biggest hits to come from this group are “Even So Come,” “One Thing Remains,” and “White Flag.”

Formerly the leader of the David Crowder Band, the now-solo musician has spent his entire career writing popular worship songs like “How He Loves,” “Never Let Go,” and “Everything Glorious.” Even since he’s gone his own way, Crowder has put out “Come As You Are” and “My Victory.”

Having started out as a worship leader in Waco, TX, the artist has a long history of turning out popular worship songs. His latest, “My Victory,” is nominated for Worship Song of the Year at the 2017 K-LOVE Fan Awards.

While we most often associate worship leaders with big stadiums and a chorus of voices, worship is sometimes more intimate with an acoustic or folksy sound. All Sons & Daughters is a duo out of Tennessee that has started to grow a following for their particular style of worship.

After releasing a series of EPs, the duo has since released four albums. The most popular of these is 2014’s self-titled work which features a great rendition of “Great Are You Lord” and “God With Us.” All Sons & Daughters has also been a popular guest for other groups in the Christian music scene. You can hear them with Third Day on “Soul on Fire,” Lauren Daigle on “Power to Redeem,” and along Brandon Heath on “No Turning Back.”

This Canadian singer/songwriter has been on the Christian music scene for a while, but the last 10 years or so have really brought his skills as a worship leader to light. Maher has been behind a number of popular worship songs that have been adopted by local churches. Some of the most popular ones includes “Your Grace Is Enough,” “Christ is Risen,” and “Lord, I Need You.”

Looking at just this selection of popular worship leaders, it’s easy to see that there are so many talented musicians out there making Christian music. At the K-LOVE Fan Awards, we celebrate the biggest names in Christian entertainment who are making an impact on the world. Featuring breathtaking performances and the biggest names in music, sports, and movies, this is the ultimate fan experience. Find out how you can be a part of the action by clicking below.