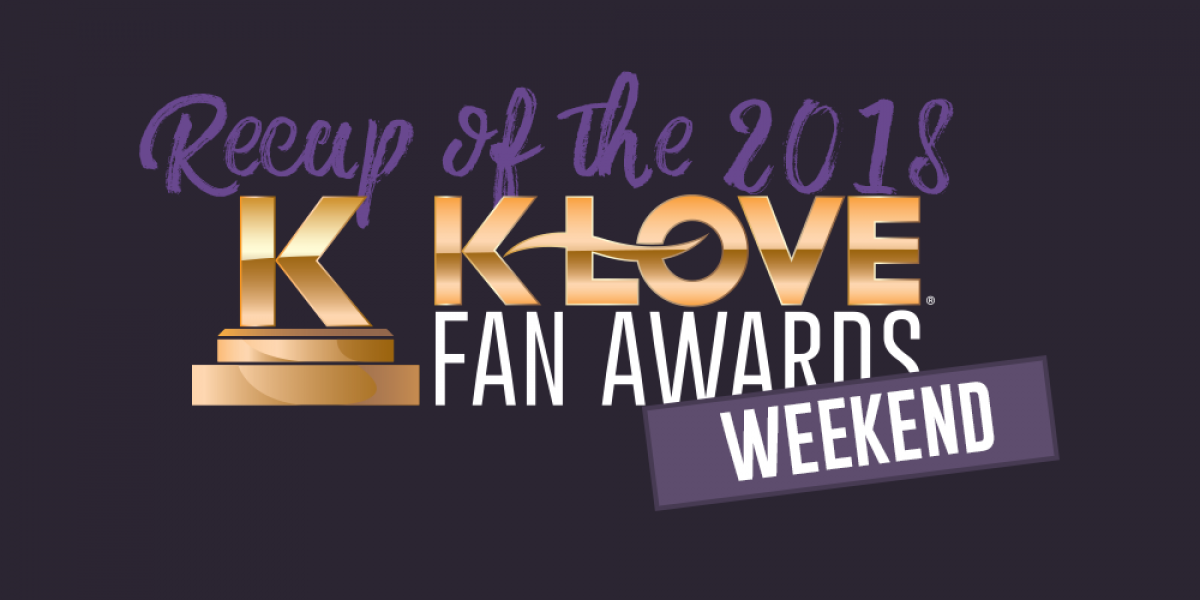 Another year of the K-LOVE Fan Awards is in the books! 2018 marked the event’s sixth year and in many ways it was the biggest and best ever. We hope you were able to join us in Nashville, TN for an exciting weekend full of Christian entertainment, but if not we’ve got a recap to let you in on all of the weekend’s happenings.

Similar to years prior, the K-LOVE Fan Awards weekend began with a massive show featuring some of today’s most popular Christian artists. First up was Riley Clemmons, who has been tearing up the airwaves with her debut single “Broken Prayers.” She was followed by one of the industry’s fastest rising artists, Tauren Wells. The “Hills and Valleys” singer graced the stage with an electrifying performance that featured everything from killer dance moves to a rousing medley of classic Christian hymns. Speaking of electrifying performances, the next artist of the night was Jordan Feliz, a man known for leaving it all on the stage. The performer applied his vocal talents to hits from his first album as well as newer material from “Future” released in March of this year. After a series of solo acts, the Kick-Off Concert concluded with Casting Crowns. The band known for a long string of inspiring and soul-stirring songs did not disappoint. Lead singer Mark Hall shared with the crowd his story of fear and heartache surrounding his cancer diagnosis from a few years back before leading the crowd in the band’s most recent single, “God of All My Days.” The night was a perfect mix of all things we love about the K-LOVE Fan Awards: worshiping the Lord, connecting with God-honoring music, and enjoying time with a community of believers.

Saturday morning kicked off once again with the Run for Love benefitting the Hands and Feet Project. The race was open to all fans and even artists like Mike Donehey of Tenth Avenue North, Ben Calhoun of Citizen Way, Bart Millard of MercyMe and others joined the festivities. Other morning activities included Coffee and Encouragement with author Jan Harrison and featuring worship with artist Plumb. Saturday was also full of meet and greets spread throughout the day. Tauren Wells, Danny Gokey, Casting Crowns, Mandisa, Zach Williams Matthew West, and TobyMac were just some of the artists on hand to meet their biggest fans and take photos. Another special meet and greet opportunity was with the band MercyMe who was appearing with the tour bus from the film “I Can Only Imagine” and movie star Dennis Quaid.

Anyone who has been a part of the K-LOVE Fan Awards weekend knows that the Songwriter Showcase is one of the events most special moments. It allows the fans to hear from some of the biggest acts in the industry in an unplugged setting where the musicians can share the inspiration for their songs as well as perform them live. The 2018 K-LOVE Fan Awards mixed things up a little by having five artists on stage at once for a round robin-style talk and performance. Steven Curtis Chapman hosted the event, which featured Natalie Grant, Unspoken, Mike Weaver of Big Daddy Weave, and Mike Donehey of Tenth Avenue North. The musicians each shared personal stories from their journeys, including Natalie Grant’s recent health scare, Steven Curtis Chapman’s family history, and Mike Donehey’s struggles with balancing home life with his work schedule. It was a powerful night of music and hope that none of will soon forget.

The last event of the K-LOVE Fan Awards weekend before the big show is a Sunday worship service. In year’s past the event has featured Casting Crowns, We Are Messengers, and others. For 2018, Bethel Church’s Brian Johnson and Cory Asbury, as well as Francesca Battistelli, were all a part of the morning’s time of worship.

Each year at the Fan Awards we try to change things up, listening to feedback from fans, partners, and the amazing team that puts together the whole weekend. One of the big changes from 2017 is that we moved the event back upstairs to the Delta Ballroom where the environment is more comfortable and there really isn’t a bad seat in the house. We also introduced a more organic layout that kept core elements like meet and greets and the merch store out in the open.

This year the K-LOVE Fan Awards also received coverage from The Tennessean, Nashville’s newspaper, in an article that interviewed 2018’s hosts, Matthew West and Mandisa. The piece reviewed the show’s history as well as addressed Christian music’s place in today’s culture. One of the firsts we mentioned earlier is that the Songwriters Showcase was updated to be more of an immersive experience, rather than a quick rotation of artists. There was also an impressive number of first-time nominees at this year’s show, including Tauren Wells, Kim Walker-Smith, and Cory Asbury.

Of course, the year’s biggest news was that the show would be broadcast for the first time ever on the Trinity Broadcasting Network. We know that this partnership is huge for fans who were unable to attend the show and fun for everyone who came and now gets to try and find themselves on TV.

What would a recap be without discussing the actual K-LOVE Fan Awards show? One of the first thing guests and viewers likely noticed is that the stage design was updated from past years in order to best serve the event as a whole. Matthew West and Mandisa kicked off the show with a fun song called “Christians Winning Awards” that poked fun at the mixed feelings that Christian artists have about not doing their job for fame, but kinda also wanting to win an award.

The K-LOVE Fan Awards show is known for, among other things, special performances and collaborations you probably won’t see anywhere else. Natalie Grant and Tauren Wells paired up for a unique performance early in the show that kicked things off just right. The two singers each have strong vocal skills, so hearing them belt out Wells’ “When We Pray” was a special moment. Another crowd-pleasing moment was when Cory Asbury took the stage with Francesca Battistelli to play his hit song “Reckless Love.” The track has had a unique influence in the Church over the past year, so for many it was the highlight worship performance of the night. Other fun performances included TobyMac’s opening number, “I just need u.,” Mandisa and “Bleed the Same,” and Matthew West’s moving tribute to Billy Graham matched up with his song, “All In.” Although for KING & COUNTRY is off touring in Europe at the moment, the band recorded a special performance of “joy.” just for the show.

We all know that music is going to be a priority when it comes the K-LOVE Fan Awards, but the show has been blessed in recent years to hear from great speakers like Louie Giglio and Levi Lusko as well. This year’s winner for the Book Impact Award, Dimas Salaberrios, joined us to share a word from his heart as well. Salaberrios works in the church, but also out on the streets in communities that are hurting and lashing out in violence. He gave a call for Christians to not be afraid to enter dangerous areas. In fact, he believes that the places we are scared of going to are the exact places where Christians should be. The message was an inspiring reminder that we have a mission on this earth and it is not one that prioritizes comfort.

As for the awards themselves, it was a great night for MercyMe and Cory Asbury. Both artists walked into the show having never won, but combined for five of the seven possible wins in musical categories. MercyMe, along with the Erwin Brothers directing duo, also took home the award for Film Impact with “I Can Only Imagine.” Here is a full list of the winners for the 2018 K-LOVE Fan Awards:

Artist of the Year: MercyMe

Male Artist of the Year: TobyMac

Group or Duo of the Year: MercyMe

Song of the Year: “Even If” by MercyMe

Worship Song of the Year: “Reckless Love” by Cory Asbury

Film/TV Impact: “I Can Only Imagine”

All in all, it was an amazing year in Christian music and the 2018 K-LOVE Fan Awards was a great reflection of that. We hope you were able to join us either in person or as part of the television event. For those who would like to find out how they can be a part of the ultimate fan experience at the K-LOVE Fan Awards, click on the link below.