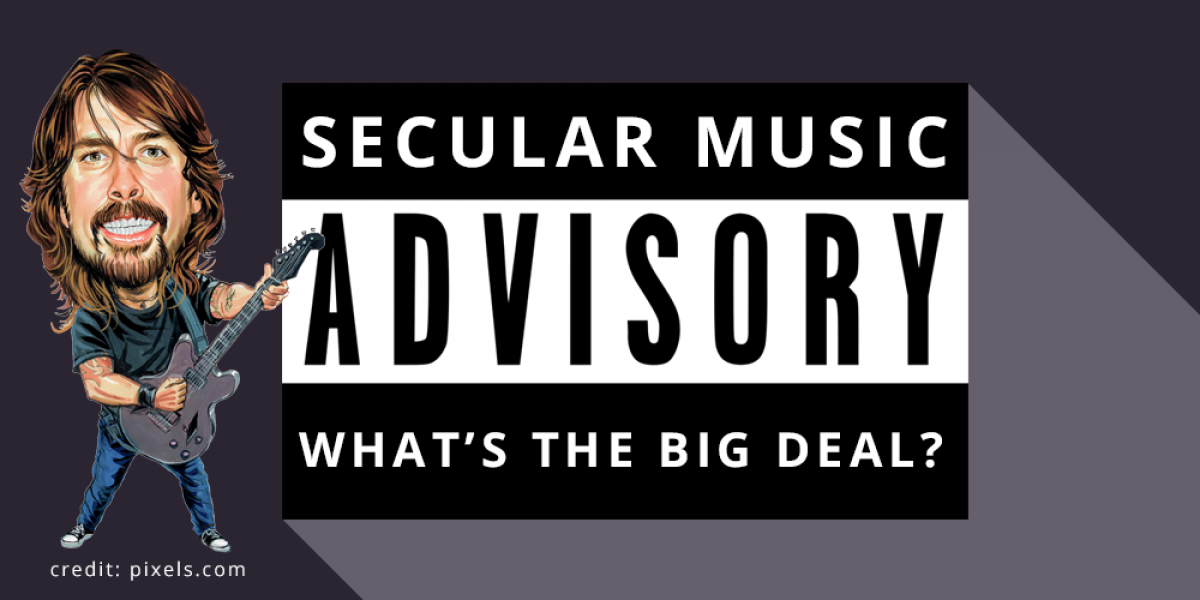 When it comes to parents raising their kids in a Christian atmosphere, there are a lot of questions that arise over entertainment. If you’re not staying up to date, it can be hard to know what’s safe and what isn’t. If your child has spent any time around a youth group, there’s likely a chance that the term “secular music” has been uttered. What does this term mean for you and your family? Beyond merely understanding the term, you also need to think about what kind of standards you want to set in the home. Let’s talk about what secular music is and how you can respond to it.

What is Secular Music?

You might be surprised to discover that the term was first coined in the medieval era. Back in the day, a lot of the music and art was commissioned by the Church or by God-fearing nobles. That’s why so many of the classic artworks that we recognize (the Sistine Chapel, statue of David, etc.) are religious in nature.

Secular music, and secular art in general, is anything that was not intended for church use. This is where music breaks down to either being deemed “sacred” or “secular.” If it’s something that might be used in corporate worship, it’s sacred. If not, secular.

Fast forward to today and you might see where those lines can be blurred. Where does Christian rap fall into that? What about when country singers like Alan Jackson or Brad Paisley cover classic hymns? We simply live in a more artistically diverse world than people did 1,000 years ago.

By today’s standards, secular music is more about the content of the music. What is the lifestyle being promoted? Is there any mention of God or biblical values? Then there are the more obvious markers like lyrics that contain bad language, drug references, and sexual scenarios.

Why do we care if music is secular or not? Why can’t we listen to whatever we want?

Believe it or not, art has an impact on society. This is especially true when it comes to music, film, and TV. Examples of this effect can be found in the protest music of the 60’s and 70’s, the influence of hip hop culture, and the public’s opinion on same-sex relationships after shows like “Will & Grace” and “Modern Family” brought the issue to primetime.

It’s silly to think that one secular song is going to fully corrupt a believer upon hitting his or her ears, but routinely listening to music that runs directly opposed to Godly values may become a stronghold in your life. Your values and priorities may be affected if you start to buy into the secular culture over what is taught in Scripture.

Typically, the question of “How much secular music is too much?” is most often pondered by young parents and teenage Christians trying to find their place in a secular world. There is plenty of music out there that is clearly offensive, but there is also a lot of gray area. Give yourself a little grace when it comes to navigating this topic.

The wonderful thing about music today is that there are so many options out there. While this allows us to hear things we’ve never heard before, it also means that we have to be more educated about we listen to and what we’re willing to play through the car radio for our families.

Several decades back, there wasn’t a whole lot of diversity when it came to Christian music. You had classic hymns, a little country/bluegrass, and some niche/ethnic music. Thanks to a boom that started in the late 80’s and early 90’s, today’s Christian music is just about as diverse as its secular counterpart.

With the establishment of Christian rap, the praise and worship movement, and everything else coming from Christian music these days, there are very distinct genres of music that might fall under the sacred title.

Just like with movies and TV shows, there are some grey areas when it comes to the entertainment choices you make for your family. Perhaps you only want to play praise and worship music in your home. Maybe you’re fine with anything that doesn’t have one of those Parental Advisory stickers. Everyone’s a little different.

It’s safe to say that most, if not all, CDs tagged “Christian” will be okay for the family. There will be the occasional time where a Christian artist crosses over to the mainstream or publicly changes their persona by switching sides on a theological issue, but music sold in Christian stores is about as safe as you can make your choice.

No matter what genre of music you’re listening to, it’s important to listen to the content of the song. If you’re someone who likes to dabble in secular music, you’ll often come across a song that sounds fun but contains terrible lyrics. We’re not just talking about suggestive or profane lyrics, though that is certainly a concern. Depending on what kind of boundaries your family has chosen to draw on music, you may not like songs that promote a worldly lifestyle or unbiblical attitude. If you’re really wanting to guard the kids from music you deem inappropriate, you’ll need to really listen when secular radio stations or CDs are playing.

How to Interact with Both

We know that there are a lot of people out there that listen to both secular and Christian music. Even if you’re not up to date on who the hottest artists are these days, there’s a good chance that you enjoy a few of the classic songs from acts like James Taylor, Creedence Clearwater Revival, or a hundred other bands.

As Christians, we should engage culture when it is beneficial. Isolationism isn’t a great way to be relevant or to impact society. No one is going to scold you for enjoying a piece of secular entertainment, but it’s important to also take in Christian music as well. You might even make a game plan for what kind of music you want to enjoy.

Many people make a point to listen to Christian radio stations like K-LOVE when they’re driving to church on Sundays or Wednesdays, This practice helps them wash off the worries of life and prepare their hearts for worship. Another rule you might make is to listen to Christian CDs or radio whenever your kids are in the car. You could also turn on some Christian tunes whenever you’re driving in a bad mood. Try to find the right balance in your life.

When it comes to listening to secular music, the main point is that you should never let the music be a stumbling block for your Christian walk. People will draw the line at different places and that’s ok. At the end of the day, we each have to apply the standard of the Bible to our own lives.

Christian music has been a great resource for believers over the years. It allows us to share our faith, find comfort, and enjoy family-friendly entertainment. At the K-LOVE Fan Awards, we like to celebrate the many achievements of Christian entertainment each year. The Fan Awards weekend is the biggest event in Christian music and features appearances by sports figures, actors, and more. To find out how you and your family can attend, click on the link below.