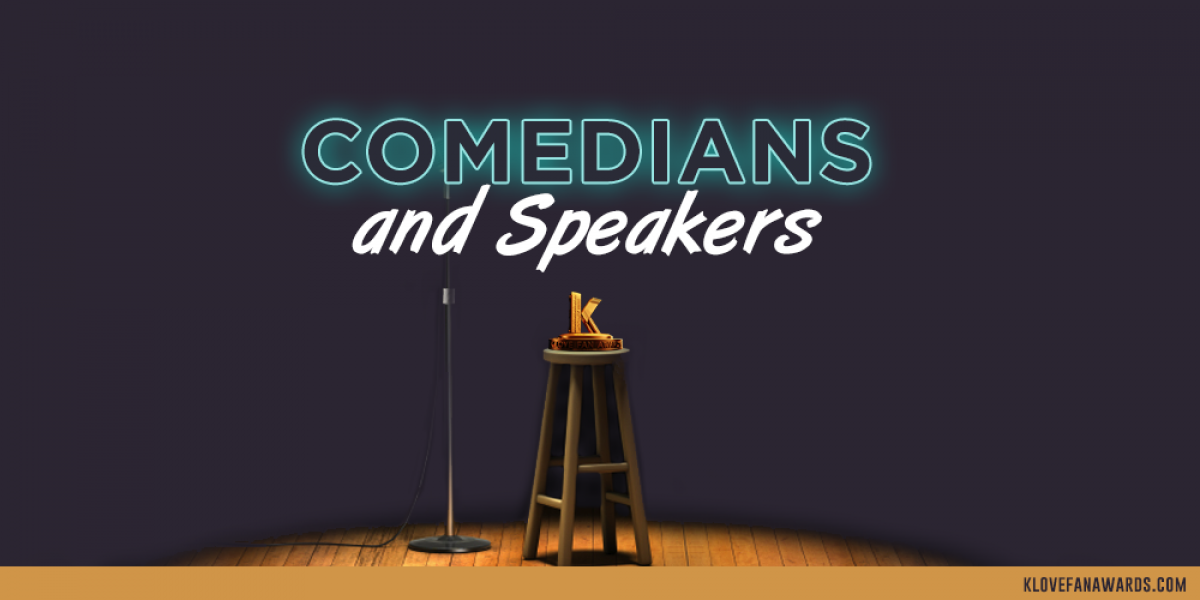 Since its creation, stand up comedy has been dominated by secular comedians performing in smoky lounges and late-night showcases. In recent years, however, more and more Christian comedians have begun to make a name for themselves. So, you may be asking yourself, “Who are the top Christian comedians?" While the answer to that question may depend on your humor preferences and where you go to find live comedy routines, we’ve compiled a list of some of the biggest names in Christian comedy. Check them out and find your new favorite.

Arguably the most well-known Christian comedian, Hawkins has been steadily putting out CDs, DVDs, and music videos since the early 2000’s. The comic calls Missouri home, but he travels all across the country performing in sold-out shows.

Among his many popular routines are bits about homeschooling, Krispy Kreme, and the different levels of “praise hands.” On top of his other talents, Hawkins is also a musician who uses his skills to liven up the crowd with musical parodies. Some of his more popular work in this area area the songs “Chick-fil-a,” “Cletus Take the Reel,” and “The Wife Song.”

With nearly 200,000 subscribers to his YouTube page and over half a million likes on Facebook, it’s clear to see that people like Hawkins’ comedy stylings. The comic will be releasing his 9th comedy special, “Just About Enough,” on November 25, 2016.

Another Christian comedy favorite, Michael Jr.’s path to success came from working the comedy clubs until he got his break. That break came in the form of "The Tonight Show" hosted by Jay Leno. Brought into the broadcast live via satellite, Michael Jr. was able to establish himself as one of the rising stars in comedy.

Though his material ranges over a variety of topics, the comic often comes back to his faith when looking for inspiration. Whether he’s taking a page from his own life or musing over a story found in the Bible, Michael Jr. knows how to find the funny side of things.

The comedian has also found time for acting when he’s not touring, appearing in the Christian hit “War Room” in 2015. Michael Jr. was also a presenter at the 2015 K-LOVE Fan Awards.

One of the greatest Christian comedians of all time, Chonda Pierce has made people laugh since the 80’s.

Originally finding her gift for comedy while performing at the now-closed Opryland USA, Pierce moved up to being a full-time comic shortly thereafter. After joining up with Christian icons like Bill Gaither and Mark Lowry, Pierce found an audience that confirmed her calling.

Since finding her voice, Pierce has gone on to release 10 albums and many DVDs, three of which went platinum.

In 2015, the comedienne released a documentary titled “Laughing in the Dark.” Originally meant to be more of a behind-the-scenes film, the documentary became much more personal after Pierce’s mother died during the filming. Also covering her life as a performer, the film depicted how the comic finds inspiration and combats her own bouts with depression. Pierce also released a book with the same title, one of eight books that she has authored.

With a full slate of tour dates, Chonda Pierce doesn’t show any signs of slowing down. As one of the most decorated female comedians of all time, the woman knows funny.

Born and raised in Knoxville, TN, Cho describes himself as “an Asian with a Southern accent.”

After attending the University of Tennessee at Knoxville in the 80’s, Cho left for California in hopes of becoming a successful comedian. After a short while there, the comic was able to get television appearances on “The Arsenio Hall Show” and stand-up programs on MTV and VH-1.

Cho has also displayed his acting chops in a few films, including “Revenge of the Nerds 3: The Next Generation” and 1997’s “McHale’s Navy” adaptation.

In addition to his successful Comedy Central special, “What’s That Clickin’ Noise?,” Cho served as the keynote entertainer for the 59th Annual Radio and Television Correspondents’ Dinner attended by President George Bush.

Hampton is a former college football player who discovered his gift for comedy after winning an impression contest at a comedy club.

Appearing regularly on “The View” and performing in the “Thou Shalt Laugh” comedy series, Hampton has found an audience for his clean comedy routine. Aside from performing onstage, the comedian has been seen on television in the shows “My Name is Earl” and BET’s “Comic View.”

Bone Hampton also hosts an annual comedy show with the Dove Awards, an organization from which he once received the title “Comedian of the Year.”

Many years ago, the stand-up comedy scene was full of acts that incorporated magic into their skits. While this trend has mostly disappeared, there are a few comedians left from those days.

Brad Stine was a comedian that started out doing magic tricks long before he chose his current career path. At an early age, he picked up a passion for magic that got him his start as a performer. After dropping the magic portion of his comedy acts, he shortly thereafter decided to focus on his faith in his routine.

Since making that choice, Stine has had success as being what the New Yorker called him, “frantic, aggressive, and caustic.” While his delivery might be aggressive, the content mostly revolves around Stine’s faith and his love for his country.

A regular at the Promise Keepers men’s rallies, the comic has tried to use his comedic talents for good. He also has appeared on Fox News, CNN, and the Glenn Beck Program.

Like other top Christian comedians on this list, Mike Williams has spent years honing his craft. The comedian was born in Chicago, a city known for great comedy and improv groups. Most professional funnymen have endured tough times that now fuel their acts and WIlliams is no exception.

He has been featured with a number of well-known Christian acts like Third Day and for KING & COUNTRY. He even won a Dove Award for his work in 2017. When he hasn't been on stage, Williams has worked with several organizations helping to stop human trafficking and fight poverty. He has also written several books on his life story, humor, and relationships.

Wanting to be a dancer as a young child, Kerri Pomarolli was destined to make her career on the stage.

Instead of dancing, she soon found another calling in comedy. She spent time acting in theater before leaving for Hollywood upon college graduation.

Kerri studied at both Second City and the Groundlings, the Ivy League of comedy training. Although she did succeed in her acting dream by winning parts in theater, TV, and film, she has focused more on comedy and motivational speaking in recent years.

One of her better comedic achievements was a string of appearances on The Tonight Show with Jay Leno where the actress impersonated high-profile icons like Jenna Bush and Tonya Harding. Pomarolli also wrote the devotional “Mom’s Night Out” as a companion piece to the 2014 film. Her other book, “Guys Like Girls Named Jennie,” is soon to be made into a feature film.

Growing up with the dream of being a newscaster, Rik Roberts found a slightly different calling after college.

Two decades later, the Christian funnyman is still touring the country and sharing his special brand of insight. One of the many weapons in his arsenal is a Barney Fife impression that he brings to many of his corporate events.

When he’s not taking to the stage or holstering a firearm with only one bullet, the comedian also instructs a string of classes for beginner comedians called the School of Laughs. Based in Nashville, TN, these courses cover everything from writing to performing.

The emergence and prosperity of Christian comedians symbolizes a market that was untapped for many years. These are only a few of the great comedians that profess a faith in Christ. The K-LOVE Fan Awards exist to highlight the Christian artists that excel each and every year in providing clean, uplifting entertainment. To learn more about how you can attend the K-LOVE Fan Awards and see many of the hottest names in Christian music, film and sports, click on the link below.