Top Christian Songs of Spring 2018: Sounds of the Season 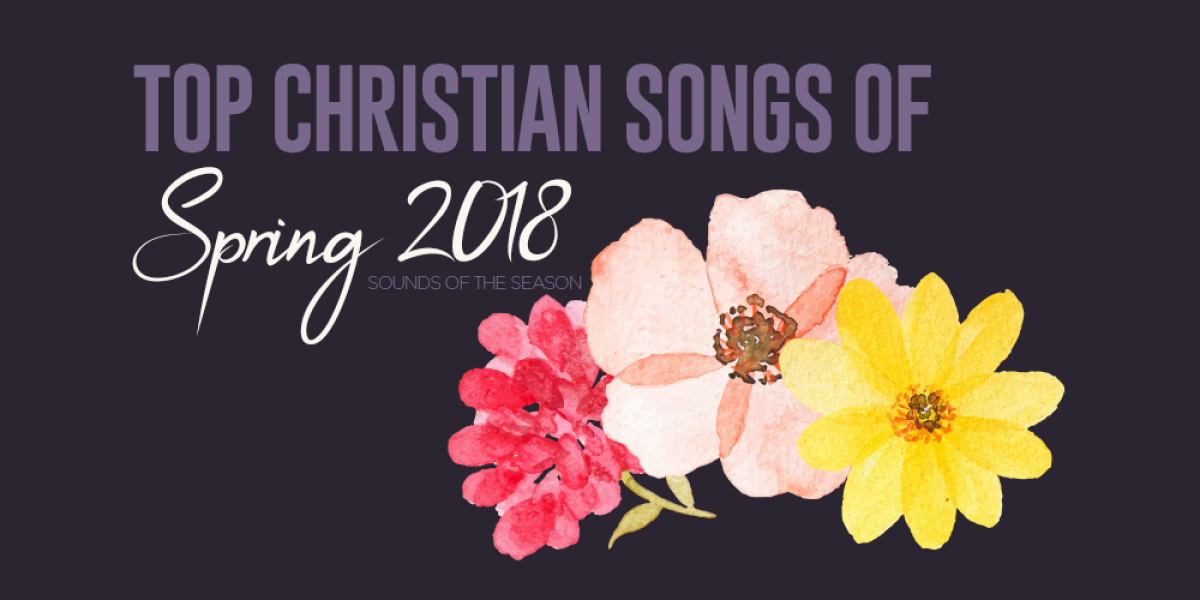 While it may not feel like it in certain parts of the country, the passing of Easter means that the spring season is in full swing. Now that the big holiday of the season has passed, what are you going to do until Mother’s Day? Clean out your closet? Catch up on some outdoor projects? Whatever you plan to tackle this season, you’re going to want the top Christian songs to help pass the time. Check out some of the new and familiar names below to see which singles are making an impact on listeners today.

Arguably the biggest new song of the season, Cory Asbury’s new song, “Reckless Love,” has seen a quick ascension to the top of the charts in 2018. Released in late 2017, the song found new levels of success upon the release of Asbury’s newest album in January of this year. “Reckless Love” plays off of the parable told by Jesus in Luke 15 where a shepherd leaves his flock of ninety-nine sheep in search of one which is lost. It is a passionate worship ballad that reminds us that each individual is of worth to the Lord.

“He Still Does (Miracles)” - Hawk Nelson

Starting in the early 2000s, Hawk Nelson delivered a pop/punk sound to Christian music that spoke to younger audiences. The group has changed both personnel as well as its sound over the years, but Hawk Nelson still dishes out the hits today. One of this spring’s top Christian songs is “He Still Does (Miracles),” the first single from the band’s April 2018 album titled “Miracles.” The song is an upbeat pop track which has a catchy chorus that tells us how God is still at work even when you’re out of options.

There are few entries on this list of top Christian songs that can match the level of chill that TobyMac’s latest single invokes. “I just need U.” was released back near the beginning of the year and it has camped out near the top of the charts ever since. Known for steady beats and a smooth delivery, TobyMac doesn’t let anyone down with this track about relying on God. “I just need U.” will have you bobbing your head in the car after a long day, remembering that you have your strongest ally in the Lord.

“God of All My Days” - Casting Crowns

When Casting Crowns put out its seventh studio album in the fall of 2016, “One Step Away” was the song of which everyone couldn’t get enough. Then came the moving ballad “Oh My Soul.” This spring saw the album’s third single in “God of All My Days.” Casting Crowns has always done a good job of engaging the listener with songs like “Who Am I” and “East to West” whose lyrics describe the relationship between God and man in such a powerful way. “God of All My Days” captures this bond once more as it speaks to how God is with us through every section of our lives.

Most of the names on this list of top Christian songs belong to artists who have been well established in the industry, but every now and then a new singer can make a grand entrance with just the right song. The young Riley Clemmons has a great new track on her hands with this song that strips away from our prayers the veneer of religiosity and encourages an honest dialogue with God about our fears and our dreams.

Sometimes the simplest songs are the most powerful. “No One Like Our God” is a song with a fair amount of lyrical repetition, but the message of its title is one that will resonate with believers around the world. Lincoln Brewster has made a career out of worship, both inside the church and as a touring musician. “No One Like Our God” is a song that stands perfectly compatible with Brewster’s life work, as it will no doubt inspire praise in all who hear it.

One of the first big albums of 2017 was “Rise” from Danny Gokey. The three-time K-LOVE Fan Award winner shot to fame following an appearance on “American Idol” where he bore his heart for all to see. A singer who has used personal losses to fuel his music, Danny Gokey’s latest is one that will touch the hearts of all who listen. We all know what it’s like to experience failure or loss. It can be hard to find God’s plan during such a trial. “Masterpiece” is a song about recognizing God at work and accepting that He has greater plans than we can imagine.

It may seem like Christian music is dominated by worship leaders and pop vocalists, but you can find a few rock bands in the mix as well. Carrollton is one such band that made it onto the list of top Christian songs for this spring. “Shelter” is the single from the band’s recent album, “Everything or Nothing.” The song plays like one of King David’s many psalms where the Biblical figure would cry out to God concerning the foes who were surrounding him before ultimately realizing that God would be more than enough protection.

Speaking of rock and roll acts, Zach Williams is a musician who knows how to put some nitty gritty into his music. Since the 2016 release of “Chain Breaker,” WIlliams has become one of the hottest new acts in the business. He followed up that megahit with another one of the year’s top Christian songs in “Old Church Choir.” His newest jam, “Fear is a Liar,” is another encouraging track that helps us to fight our battles much in the same way that “Chain Breaker” did. Instead of listening to the voice of all your doubts and worries, just cast it aside and trust in God.

Chris Tomlin has certainly written his fair share of top Christian songs over the years. “Indescribable” and “Our God” are just two of the worship leader’s biggest singles. It’s been a little while since we’ve seen some fresh material from the “Good Good Father” singer (partly because his hit songs typically enjoy a long run). “Resurrection Power” falls into the same sound as some of Tomlin’s other singles, inspiring a level of praise and joy that is unmistakable. As of this writing the song has just peaked at #11 on the Hot Christian Songs chart, so it may still have quite a way to go.

Austin French’s contribution to the top Christian songs list arrived in December, but it may have been buried by Christmas festivities. The good news is that it is has been charting for a few months now and listeners can’t get enough. “Freedom Hymn” is a personal account of how God can change a life. The message is that we can fight for freedom all our lives, but we will never experience true freedom or joy until we step before the cross.

“More Than Anything” - Natalie Grant

So often we think about the Christian experience as us simply asking God for stuff, but there is a relationship between us and God that needs to be maintained. In “More Than Anything,” Natalie Grant asks God to help her crave His presence over the things that God can do for her. The single is the fourth hit song to come from Grant’s 2015 album, “Be One,” following tracks like “King of the World” and “Clean.”

Now that you know what the top Christian songs of spring 2018 are, it’s time to start adding them to your playlist or requesting them on Christian stations like K-LOVE. Having more great music in your life is never a bad thing. As you start to venture outdoors or kick off a large home improvement task, find some great tunes to be the soundtrack of your day.

At the K-LOVE Fan Awards, we love to celebrate the music and other media that is impacting believers around the country. We do this by bringing together the hottest names in music, film, books, and sports for the biggest weekend in Christian entertainment. Find out how you and your family can be a part of the ultimate fan experience by clicking on the banner below.