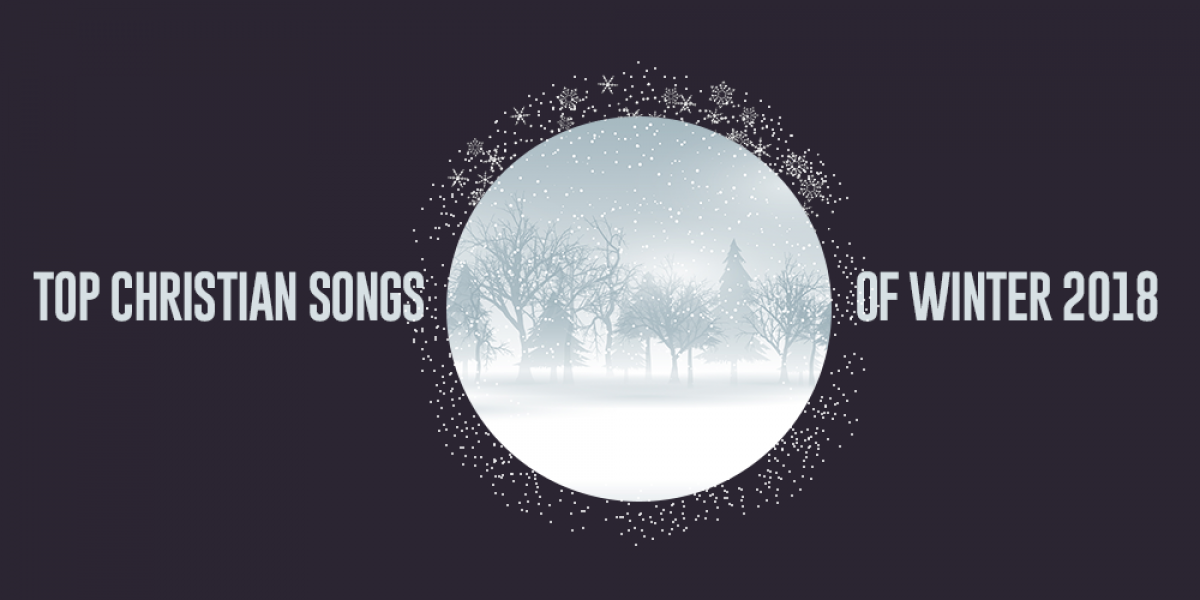 Now that you’ve put away your Christmas decorations (or have you?) and returned to your normal life, you’re probably wanting some new music to fill your days. Lucky for you, we have the top Christian songs of the season at your disposal. Don’t let the winter blues get you down! Instead, check out a few of these top Christian songs from bands like Sidewalk Prophets and stay warm while enjoying the soothing voice of Tauren Wells. Find your new soundtrack for the winter and start working on those New Year’s resolutions!

Throughout the band’s existence, Tenth Avenue North has released plenty of top Christian songs that deal with issues of identity and self-worth. The group’s latest hit, “Control (Somehow You Want Me),” strikes this familiar chord again by laying out the nature of our relationship to God. It is only in trusting God and resting in His authority that we can experience true freedom. When we give up control, that’s when we are placed into the best hands. The song follows Tenth Avenue North’s previous chart topper “I Have This Hope.”

Speaking of hope, another one of the top Christian songs of winter 2018 is this stirring ballad from Crowder and Tauren Wells. The tune is as simple as its video, an old-timey hymn about placing all of your faith in Christ. No matter what sorrow today has brought, we can always trust in a brighter tomorrow. “All My Hope” was originally dropped in 2016 as part of Crowder’s “American Prodigal” album, however the singer put out this updated take in September of 2017. The new version has sat near the top of the Hot Christian Songs chart for roughly five months at the time of this post.

We’ve already spoken on how excited we are to have new music from Mandisa (and that she’ll be joining us for the 2018 K-LOVE Fan Awards), but “Bleed the Same” has been been blowing up the charts these last few months. There has been a large amount of unrest in the United States lately over divisive issues like politics and race. Mandisa and TobyMac joined up with Kirk Franklin for this moving song of unity that reminds us we should love one another and celebrate what brings us together instead of focusing on that which divides us.

There aren’t many strictly praise and worship songs on the list of top Christian songs this season, but you can always count on Matt Redman to deliver on that front. The “10,000 Reasons” singer joins forces with the talented Tasha Cobbs Leonard for “Gracefully Broken.” The song is one of Redman’s biggest hits in years, delivering a worship experience of complete surrender. As we said with Tenth Avenue North’s earlier entry, it is when we recognize our own brokenness that we can fully appreciate who God is.

“When We Pray” - Tauren Wells

In case you didn’t notice, Tauren Wells was a busy man in 2017. On top of being part of two top 10 singles, the singer also released his debut solo album, “Hills and Valleys.” The most recent hit song Wells has been behind is “When We Pray.” Hitting near the top of several charts, the song has served as a strong reminder that believers have an outlet to the ultimate power in the universe. When we see injustice, fear, or evil, we should be calling on God to make a change and for His will to be done. Prayer has the power to change the world.

“Come to the Table” - Sidewalk Prophets

Sidewalk Prophets, the band behind top Christian songs like “The Words I Would Say” and “Live Like That,” is back with a new hit in “Come to the Table.” A common theme forming from this list of top Christian songs is one of unity, love, and acceptance in Christ. We see that played out in this track as we are invited to join those who have been redeemed by the blood of Christ. The Bible tells us over and over in verses like John 3:16 that God loves us and wants to have a personal relationship with us.

One of the biggest new artists to come on the scene in recent years is Jordan Feliz. His debut album, “The River,” spent over a year on the Top Christian Albums chart and produced a number of strong singles like “Beloved” and “Never Too Far Gone.” All things must come to an end, however, so the singer is back with some new music this winter. “Witness” has recently been joined by “Faith” as Feliz’s additions to the list of top Christian songs. Both are perfectly on brand for the singer as they broadcast a message of hope and love while mixing together the best of his pop and rock influences.

One of the newest entries on the list of top Christian songs for winter 2018 is this encouraging track from the guys in Unspoken. The group has put out a few popular Christian singles over the years with songs like “Start a Fire” and “Call It Grace.” Unspoken’s latest release, “Miracle,” is one that pushes us to never give up hope. No matter how rough things might look right now, we serve a God who works at a higher level than we can ever understand.

“I Need You God” - Consumed By Fire

A relatively new band to the Christian music scene, Consumed By Fire has made a few waves with its debut album, “Giving Over.” The song that landed them on this list of top Christian songs is the worshipful “I Need You God.” Like a blending of Rend Collective and Big Daddy Weave, the group’s infectious sound delivers in this new hit song.

Whether you’re buried under several feet of snow or simply enjoying “sweater weather,” we hope this collection of winter’s top Christian songs is more than enough to keep you warm and entertained. At the K-LOVE Fan Awards, we strive to connect fans with the artists they love. Each year we bring together the biggest names in Christian entertainment for the season’s hottest event. Find out how you and your family can enjoy the ultimate fan experience by clicking on the link below.