Traditional Christian Hymns and CCM: Is One Better? 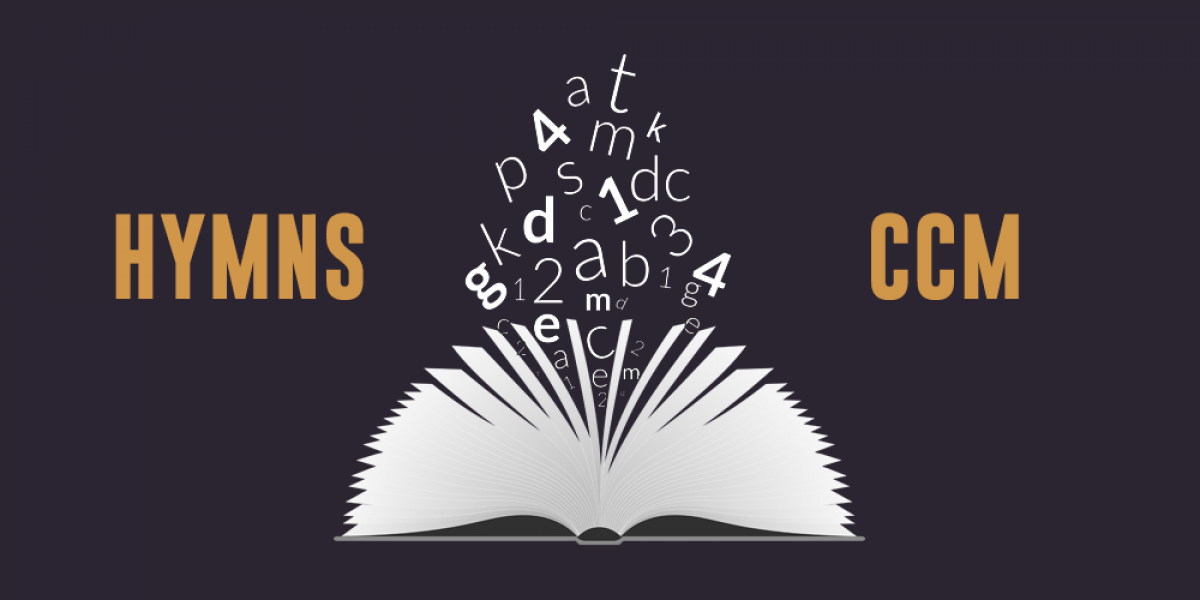 Throughout history, music has been one of the preferred methods for storytelling and establishing culture. Even before technology made it easier to pass along printed materials, societies would share their history through song. We can see in the Bible that David used songs to praise the Lord and console his fears concerning Saul and other problems. The music has changed over the years, but we still use it today in worship and sometimes just for fun. Traditional Christian hymns are still fairly popular today, although the explosion of the CCM market over the last couple of decades has diminished their usage.

Music plays an important role in the church on Sunday mornings. There’s been more than a few times where the style of worship has played a factor in church membership, for better or worse. When we look at traditional christian hymns and the more modern Christian songs of the day, what kind of differences do we see? Is one better than the other? First, let’s look at the songwriting process in both.

When we think of hymns today, the music that we are most likely bringing to mind are songs written in the 18th and 19th century. There was an explosion of hymn writing in this period, especially in countries with English as the dominant language. One reason for this was the input of Charles Wesley, who wrote nearly 9,000 hymns! Can you imagine writing even one-tenth of that amount? There are several outliers for this range in time of course. Martin Luther penned many hymns, including “A Mighty Fortress is Our God,” in the early 1500s. Even some 20th century writers contributed to hymns like “Great is Thy Faithfulness” and “Turn Your Eyes Upon Jesus.”

Looking at the authors of many of these old Christian songs, we see that a large section of them were preachers and theologians. If the writers weren’t employed in some form of ministry, they were often educated men who were just as likely to write a textbook as they were a hymn. Whether it was poetry, letters to friends, or journaling, the people of this time period were much more interested in writing than most people are today.

We do have new music today, though, so somebody has to be writing it. These days, music has become an industry. No matter the genre, there are hundreds of companies out there who are dedicated to getting new music out there. Even with Christian music, there are record companies, agents, managers, and so forth. That’s not to say that any of the passion has been lost when it comes to Christian songwriting, only that it’s more organized now. We have instrumental praise, CCM, worship music, and several other designations to describe the sound that we’re looking for. In the old days it might take decades for the new hymn you wrote to make it a few states over, but the technology we have now allows for a popular song to be heard across the globe simultaneously.

Today’s Musicians vs. the Old School

At the time when traditional Christian hymns were written, corporate singing in churches wasn’t always the most popular thing. Despite the invention of the printing press in the 15th century, there weren’t always hymnals sitting around for the congregation’s use. A more obvious observation of the time period is that these churches didn’t have a full band consisting of drummers, violinists, electric guitar players, and beyond. The singing of traditional Christian hymns was often lead by the preacher and consisted of only the voices of the congregation unless an organ or similar instrument was present.

Although some denominations still employ the method of singing acapella or only using certain instruments, many churches have adopted a more contemporary sound for at least some services. This means that musicians have the ability to worship the Lord and serve in their churches doing something they love. For some musicians it can even be a new career path. There are a lot of churches in America where you can find full-time worship pastors, artists in residence, and other positions for musicians. If you want to take your musical talents to a bigger stage, you can even become a Christian artist who shares original songs across the country.

Whether you stick to strictly worship music or you pursue a sound that’s a little more pop-ish in CCM, Christian music can be a wonderful resource for those who seek to worship the Lord every day.

Music is constantly changing. It may bring certain fads back around in cycles, but what’s popular today sounds extremely different from what was popular only 10-15 years ago. As time marches on, Christian music will experience the same thing. If you watch the music video for Steven Curtis Chapman’s “Live Out Loud” below, you’ll notice it sounds pretty different from most of what’s trending today in Christian music. The song, while great, came out in 2001 and it sounds like it.

As music continues to change over time, we have to decide how we want to incorporate worship songs and other Christian music into our lives.

Music in the Church

With so many churches accepting more modern forms of worship these days, it’s not uncommon to hear songs from Chris Tomlin and Matt Maher with something predating the Civil War in the same Sunday morning.

You might be thinking, “But those are all worship songs. What about Christian music that’s more intended for radio play?” It’s fair to admit that Christian music, or even CCM, is a pretty broad term that covers different styles of music. Depending on what kind of church you go to, songs from acts like for King and Country, Mandisa, or Third Day might be used in a church service, on a youth night, or in a cafe area. Part of what’s so great about Christian music today is that the diversity allows us to listen in a variety of ways.

It’s important to remember that everything under the banner of Christian music is meant to glorify God and/or empower believers. Just like singing “Amazing Grace” is an act of worship, Matt Redman’s “10,000 Reasons” can bring a spirit of praise. We shouldn’t pick and choose which music can be pleasing to God.

Finding the Best of Both Worlds

Instead of rejecting traditional Christian hymns for being too old or CCM for being too young, we should try to find a balance and recognize that anything which brings glory to God is worth our time. At the end of the day, each can be used in worship so long as the Lord is being praised. There’s been a lot of unnecessary conflict over music choices in the church in recent years. No one’s saying you have to run out and buy the latest CCM hits or that your playlist should only consist of songs written by Isaac Watts. Let’s acknowledge that different styles of music can accomplish the same goal and move on with our lives.

Whether it’s traditional Christian hymns or something more modern, Christian music is great to enjoy throughout the day. It’s encouraging, faith-affirming, and clean for the whole family. That’s why the K-LOVE Fan Awards honors the year’s biggest hits and gives fans the opportunity to vote on their favorite artists. Each year we gather the greatest acts together for one big weekend full of performances, meet and greets, red carpets and more. Find out how you can be a part of the fun by clicking on the link below.