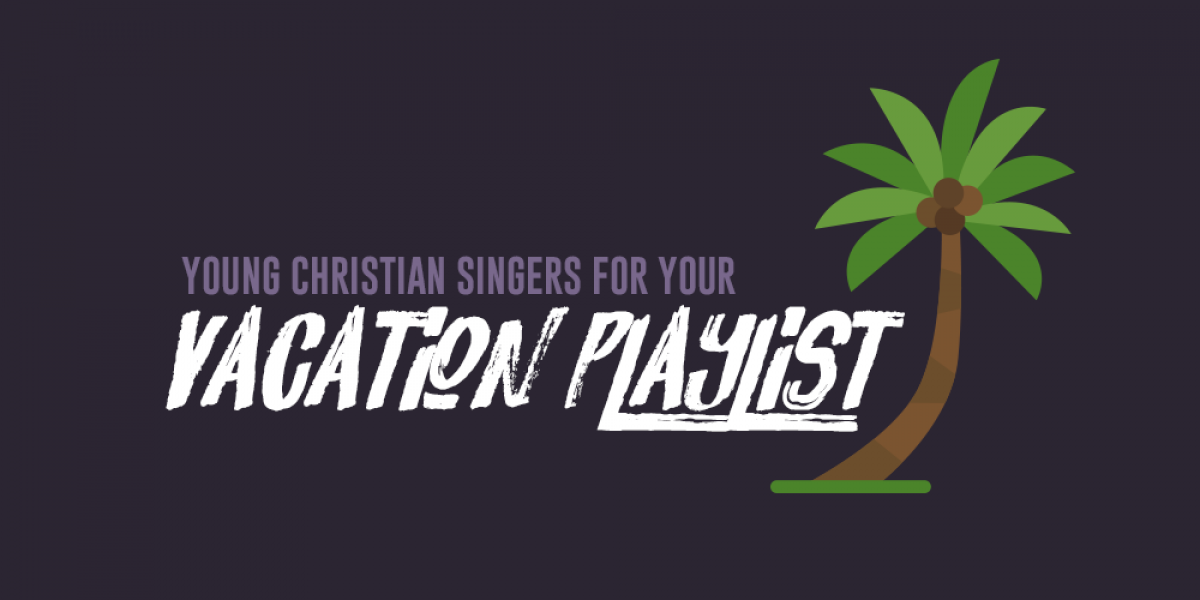 It’s time to hit the road! If you’re going to be traveling for spring break, summer vacation, or just a weekend getaway, you’ll need some music for the road. While you can always listen to a Christian station like K-LOVE, maybe you’re in an area with spotty reception or you forgot to download the K-LOVE app on your smartphone. Whatever the reason, we wanted to tell you about some of the young Christian singers to which you should be listening. There are plenty of older musicians who have made a tremendous impact on the Christian community, but we want to highlight artists in the 20-35 range who have been and will be making hit songs through the years. From well-known to brand new, here are some of our favorite young Christian singers.

Since we’re talking about young Christian singers, why not kick things off with one of the youngest musicians in the whole genre? Hollyn came onto the scene in 2015 shortly after a run on “American Idol.” First appearing with TobyMac on songs like “Backseat Driver,” the singer’s self-titled EP was a major hit. Hollyn released her first full-length album, “One-Way Conversations,” in early 2017, resulting in a place on the Billboard 200. Some of her best songs for your vacation playlist are “Love With Your Life” and “Alone.”

We’ve talked a lot about Tauren Wells, a man who has quickly become one of the fastest emerging stars of Christian music. Formerly the frontman of Royal Tailor, Wells is now a solo artist making it big with hits like “Hills and Valleys” and “When We Pray.” On top of his own music, the singer has appeared with Crowder on “All My Hope” and Social Club Misfits for “War Cry.” If you’re looking for good music from young Christian singers, we recommend all four of these songs.

Like Hollyn, Jamie Grace is one of the young Christian singers who found success at an early age. When she was only a teenager, Grace began using YouTube to get her music out to the public. One person who took notice was TobyMac, who once again had an eye for young talent. Since then, the vocalist has put out three full-length albums, including last year’s “‘91.” Most of Grace’s music has a very uplifting tune like what’s found in “The Happy Song” and “Beautiful Day.”

Jasmine Murray competed on the same reality show that launched the careers of Hollyn and others, but that’s not the only major competition she’s participated in, having been a part of the Miss America pageant in 2015. Murray erupted onto the Christian music scene in early 2017 with the catchy song “Fearless,” which went all the way to #12 on the Hot Christian Songs chart. She has gone on to release a self-titled EP that features another hit with “No Other Love.”

Some young Christian singers set out to be in the religious sphere while others stumble into it after the fact. Mallary Hope started as a country singer years ago, but now has found a voice in Christian music. She recently put out an eight-song record that gives listeners a good idea of what to expect out of her new sound. The self-titled work has a few strong singles in “Now” and “Pray with You.”

Yet another artist to be born from the success of “American Idol,” Colton Dixon made it well beyond the Top 10 during the show’s eleventh season. After gaining a number of fans through the competition, Dixon released his first album, “A Messenger,” in 2013. A few recommendations from the singer’s discography include “More of You,” “All That Matters,” and “Through All of It.”

There have been plenty of young Christian singers to get their start as worship leaders and Cody Carnes is no exception. Carnes spent years with Gateway Worship where he met his wife, a singer by the name of Kari Jobe. He’s dabbled with a solo career over the years, but Carnes made a statement with the 2017 release of “The Darker the Night/The Brighter the Morning.” Among the musician’s top songs are “What Freedom Feels Like” and “The Cross Has the Final Word.”

Young Christian singers don’t typically enjoy the kind of success that Lauren Daigle experienced with her first album, “How Can It Be.” The title track blew up radio stations and led the album to 11 weeks at the #1 on the Top Christian Albums chart. Since that debut, Daigle has released a best-selling Christmas album and sold out plenty of concert dates. We’re all eagerly waiting for a follow-up to the 2015 album that started her meteoric rise.

“American Idol” isn’t the only reality show to help out one of the young Christian singers on our list. David Dunn appeared on season two of “The Voice” and has gone on to release great songs like ”Grace Will Lead Me Home” and  “I Wanna Go Back.” Both of these tracks have helped to elevate Dunn’s 2017 album “Yellow Balloons” and make the singer a household name for Christian listeners.

It’s hard to believe that Francesca Battistelli is still so young despite having been in the industry for over a decade. To celebrate this milestone, the vocalist put out a greatest hits album in 2017 that featured many of her fan’s favorite songs like “I’m Letting Go,” “Write Your Story,” and “He Knows My Name.” In those first ten years, Battistelli was able to win a Grammy, two K-LOVE Fan Awards, and several Dove Awards. We’ll soon find out what the next ten years have in store.

Speaking of young Christian singers who have had some time on the scene, Phil Wickham is one who has released plenty of strong Christian albums and hit songs. His self-titled album in 2006 was a wonderful foretelling of all the great music to come. Among his best known work are “Divine Romance,” “You’re Beautiful,” and the 2013 song “This Is Amazing Grace.” Singles may get the most attention these days, but Wickham has also attained the impressive feat of having five albums hit the Billboard Top 200.

Now for the second youngest artist (by only three days) on our list, Hannah Kerr. The 21-year-old released her first album only two years ago, but has since put out a successful Christmas EP and a hot 2017 single in “Warrior.” We’re excited to see where the singer’s career is headed as she discovers her voice and shares her talent with the world.

Along with Tauren Wells and Casting Crowns, this young singer will be performing at the Kick-Off Concert for the 2018 K-LOVE Fan Awards. Jordan Feliz was able to take his first hit song, “The River,” to impressive heights, but the artist shows no signs of resting on his early laurels. In late 2017 Feliz dropped two impressive new singles in “Faith” and “Witness,” both of which point to great new work on the horizon.

Whether your vacation playlist is looking for something fun or serious, Blanca is one of the young Christian singers you need to add to your playlist. Releasing her debut album in 2015, Blanca hit the gate running with songs like “Different Drum” and “Who I Am.” The record was a collaboration of engaging beats and inspirational lyrics that made the album a must-listen. Fast forward to the fall of 2017 and you get the “Real Love” EP which has a title track that will move you to the core. Any way you play it with Blanca, you’re going to get something memorable.

These are just some of the talented young Christian singers moving up the ranks in the industry. Some have already won awards or topped the charts, while others are just starting to make a name for themselves. We encourage you to give each a listen and see if you might have a new favorite artist on your hands. The K-LOVE Fan Awards is all about connecting fans with the singers and entertainers they love, which is why it’s the year’s biggest event. From breathtaking performances to one-of-a-kind access, the K-LOVE Fan Awards is the ultimate fan experience. Find out how you can join in the fun by clicking on the link below.