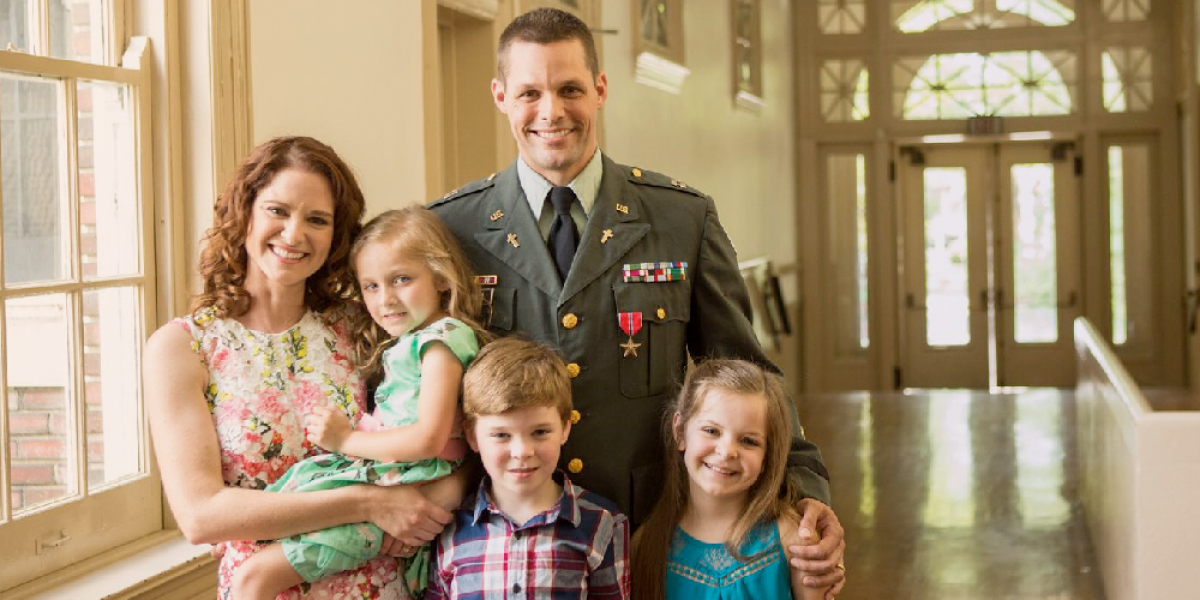 As we celebrate our fathers this year, we may think about what it means to be a man or where we can find strong examples of fatherhood in our media today. Your mind could go to Gregory Peck’s portrayal of Atticus Finch in “To Kill a Mockingbird” or Jimmy Stewart’s protagonist in “It’s a Wonderful Life.” We can also find strong father characters in Christian films made today. Stories of faith often involve the family unit. In these movies we see a variety of fathers who lead their families in unique ways. Some are further along in their spiritual walks than others. Many often find redemption during the course of the film. Let’s look at these different fathers and their examples of leadership in the family.

Two facets of being a parent, often more so for fathers, are sacrificial love and acting as a spiritual leader in the home. “Indivisible” tells the true story of Army chaplain Darren Turner, who was sent to the Middle East in the late 2000s. Throughout the film Turner is tested by the distance from his family and the moral questions faced by the average soldier. “Indivisible” raises interesting questions about facing stress, being a good parent, and leading others in a relationship with Christ. Whether or not a father serves in the military, there is plenty to relate to in this 2018 film.

Just as in life, some Christian films show that good fathers can be years in the making. In the biographical film “I Can Only Imagine,” MercyMe singer Bart Millard shares the struggles he had with an abusive father until the day God drastically took hold of his life. Dennis Quaid skillfully plays the role of a dad who has been conquered by fear, anger, and vice. There are many families who have trouble fully appreciating Father’s Day due to their own experiences, but “I Can Only Imagine” reminds us that even our greatest tormentors can be radically changed through the love of Christ.

The first of two films from the Kendrick Brothers on our list, “War Room” tells the story of how one family experienced radical change by dedicating itself to prayer and walking into each day with a plan. Tony Jordan (played by T.C. Stallings) is by most accounts doing just fine with his life. He’s married, has a child, lives in a big house, and does well for himself at work. Beneath this veneer, however, his family is falling apart. Though the film focuses more on Priscilla Shirer’s wife character, it shows us how one couple can change everything by adopting a new perspective. Fatherhood is not just about providing a paycheck for the family, but being part of a team.

“War Room” may have only been partially about fatherhood, but the Kendrick Brothers clearly had the topic at the forefront of their minds in “Courageous.” The story follows four policemen who are fathers as they try to fully embrace the role God has given them with their children. With four characters to follow, every man can find certain details which probably resonate with their own experiences. This is true for men who didn’t know their fathers as well as dads who are extremely involved with their kids. A fifth dad character also gives fathers a different kind of role model to aspire to be in the workplace and beyond. Integrity and brotherhood are just a few of the themes tackled in "Courageous."

In this inspirational true story, a high school football team in the 1970s conquers divisions spurred by integration through the power of belief in Jesus Christ. Some of the best Christian films featuring strong father characters take place in the world of sports. From parents to coaches, we get to see what leadership looks like when it is applied to young men devoted to a cause. Coach Hank Erwin and other men in “Woodlawn” are great examples of what it looks like to live out your beliefs.

“End of the Spear”

Not only is “End of the Spear” an account of the tragic deaths of missionaries Jim Elliot, Nate Saint, and others, the film is about the bond between a father and son. Through working with the native Huaorani people in Ecuador, Steve Saint is able to connect with his father and learn about the similarities between himself and the tribal people he hated for separating them. “End of the Spear” also shows us that the values we instill in our children are of the utmost importance.

Christian films are often dramatic stories of conversion or miraculous recoveries from illnesses, but the simple tale of one man, his church, and his community can be equally important. “All Saints” is based on the true account of a pastor who moves to a small town in order to see to the closing of a local church, but instead finds a way to breathe life into the community by reaching out to its immigrants. The film weaves together interesting dynamics of Chrisian family life, small town politics, and the ability of a community to adapt. It’s a solid family-friendly movie, but its protagonist (played by John Corbett) is also a solid example of strong father characters in Christian films.

Sometimes a father’s importance can’t truly be appreciated until his absence is felt. “Little Boy” is the story of a young child whose father (and best friend) is sent off to WWII. After an encounter with a magician during a live performance, the boy believes he can bring his father home if only he wishes for it strongly enough. This touching film reminds us of the irreplaceable role of fathers in their children’s lives and the strange nature of belief when everyone else thinks you are wrong.

“A Question of Faith”

Character can be most clearly revealed when conflict arises. “A Question of Faith” pits three families together when they must deal with death, sudden illness, and a number of other faith-challenging issues. The film features several strong father characters who are fleshed out. They try to rectify their beliefs with what is happening around them. Some never lose heart, while others give in to their anger and pain. Their struggles show us the many questions which can cloud our faith in times of hurting.

These are just a few of the Christian films which depict strong father characters facing challenges and working towards victory through a number of trials. As we move on from Father’s Day, let these examples, as well as the Bible and other Christian leaders, help us to better understand how we can lead our families through life with both eyes on Jesus.

At the K-LOVE Fan Awards, we want to celebrate all that God is doing through Christian films, music, books and sports. We bring together the biggest names in Christian entertainment with the fans who can’t get enough for an amazing weekend of worship and fun. Find out how you can enjoy the ultimate fan experience by clicking on the link below.